The curious case of Ian Bell has plagued England's One-Day International (ODIs) side for quite a while now. Clearly ridiculously talented, Bell just hasn't got it together in ODIs, with just one century from 108 games and a worse-than-expected average of just 34.04. 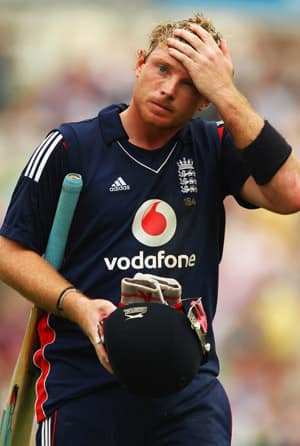 The curious case of Ian Bell has plagued England’s One-Day International (ODIs) side for quite a while now. Clearly ridiculously talented, Bell just hasn’t got it together in ODIs, with just one century from 108 games and a worse-than-expected average of just 34.04. Bell’s Test form has gone through the roof in the past two years (this Pakistan series excepted), but if anything his ODI form has gone downhill, with only one fifty in the last 14 games. After not making the team for the first four games of England’s most recent ODI tour, he hasn’t even made the squad for this to-be-played Pakistan series in the UAE. So is Ian Bell’s ODI career over? Or indeed, should it be?

Well, simply put, the performances of Bell in ODIs sum up England’s failing in the 50- over format. A few starts here and there, but very rarely the big match-winning score, and when the pressure’s on, he hasn’t been the man to put his hand up for the team (Bell averages just 26 in games England have lost). Add to that a poor away record (averaging 28 in games outsideEngland), and Bell’s ODI history is a microcosm of England and their general lack of consistent ODI success.

The stats may be harsh on Bell, as he has been shunted up and down the order, having been employed in every position from aggressive opener, to middle-order nurdler, even to No 11 – admittedly coming in with a runner due to a broken foot. And the England management’s inability to find a regular slot or game plan for Bell could well sum up why England just haven’t got it right in 50-over cricket as well. But he’s been given countless chances to impress at ODI level, and hasn’t done it. Eventually somebody had to be ruthless and give him the boot.

Mediocrity has almost become a byword for English batsmen in ODI cricket over the past 10 years, and probably well before that as well. Players who are clearly naturally talented, or have had sparkling Test careers just haven’t cut it in limited over cricket, yet have been allowed prolonged stays in the side, without ever producing. Owais Shah – 71 matches, averaging 30 with only one hundred. Michael Vaughan – 86 matches, averaging 27, no hundreds. Ravi Bopara – 69 matches, averaging 29 with no hundreds. These are not numbers that lead to a successful side. You can add to that post 2008 Kevin Pietersen – 36 matches, averaging 25 with no centuries. The culture of “well, he’s clearly a good player / scored runs in tests, so let’s keep him in” has led to England being nothing more than a second rate ODI team, and if England are to become successful, has to stop.

There’s no real room for sentiment in international cricket, and while Bell’s Test exploits should be celebrated, his ODI form should be downright ridiculed. While being a good Test batsman can sometimes mean you’ll be a good ODI player, the Venn Diagram doesn’t totally intersect. Just ask “good in ODIs, not so good in Tests” Eoin Morgan for proof that the two disciplines require different talents, and don’t always lead to the same results. In the likes of Alex Hales, Jos Buttler and Jonny Bairstow, England have some incredibly exciting young batsmen, who’s games are perfectly set up for limited over international cricket. These are the players who England should be playing, not Bell, and after a long time, it seems that the England management have realised it. While Andy Flower has spoken about how dropping Bell for this series isn’t the end of his ODI career, if England are to make a success of it in the short-forms, hopefully this will be the last that we see of Ian Bell in ODIs.

(Will Atkins is a cricket writer and blogger for The Short Midwicket – theshortmidwicket.blogspot.com. When he isn’t watching, writing or podcasting about cricket, he dresses up as a panther for Middlesex County Cricket Club)