No surprises that the tournament XI is dominated by the players from eventual winners Pakistan, runners-up India and tournament favourites England.

Pakistan completed a fairytale run in ICC Champions Trophy 2017 by spanking defending champions and title favourites India in the final by 180 runs, at The Oval on Sunday. The bottom-ranked team in the eight-nation tournament, Pakistan chose grandest of occasions to make a statement by handing a strong Indian side their worst defeat against the arch-rivals in ODI cricket. The team rose like a phoenix from the ashes after their loss against India in the league match and won their maiden Champions Trophy title. No surprises that the tournament XI is dominated by their players, along with India and England s. Take a look at the Champions Trophy 2017 XI:

No surprises there. The man, who scored the most runs in the previous edition, set the 2017 edition on fire as well, ending with the Golden Bat. He picks himself in this XI. Though Dhawan was brilliant in the tournament, not doing enough in the final and throwing his wicket away in the semi-final will hurt him.

If Dhawan was an obvious addition to this XI, Fakhar Zaman had to compete with a few contenders. There were at least two openers Tamim Iqbal and Rohit Sharma who scored more runs than him. But leaving out Zaman would be a sin. Making his debut in the marquee tournament and coming into the side in a pressure game, Zaman showed no signs of nerves. He was good against South Africa on debut, even better against Sri Lanka and England, and at his best against India in the mother of all battles, the final, where he hammered 106-ball 114 to help his side post a massive 338. For not wilting under the pressure and for rising to the occasion, Zaman makes it to the XI.

It is always difficult to leave out players of Virat Kohli and Joe Root s stature from any XI. More so, when they have got runs in a particular tournament. Yes, Kohli and Root did score more runs than Williamson in the tournament. Root hammered an unbeaten hundred to set up a brilliant chase against Bangladesh and followed it up with 64 against New Zealand, but he failed to deliver against Australia and Pakistan. Same with Kohli, who struck three unbeaten fifties but failed on two occasions, including the all-important final. Williamson, on the other hand, went past fifty-run mark every time he batted. True, his knocks could not get his side over the line, but he makes it to the side for his consistency.

You may argue why have Morgan in your side and not Kohli or Root. But it won t be fair to consider a player for any other position than the one he plays at for his side. Morgan was the best No. 4 batsman in the tournament, getting starts in all the four innings he played. His 75* in the tournament opener and 87 against Australia when the chips were down in a huge chase, stand out. Morgan was good in the semi-final too, but his dismissal triggered an English collapse.

Much like Morgan, Ben Stokes was the best of the tournament for his number. Batting at No. 5, he scored 184 runs in 3 innings, with the best of 102 not out in a stunning chase against Australia. Though he struggled to get bat on ball against Pakistan in the semi-final, his other heroics with the bat as well as ball (3 wickets) are too good to be ignored.

An obvious pick again, isn t he? Sarfraz Ahmed marshalled his troops very well, especially after the solid thrashing at the hands of India in their tournament opener. Since then, Pakistan looked a completely different outfit, playing with unmatched passion and aggression. He chipped in with the bat too, scoring match-winning 61 not out in the virtual quarter-final against Sri Lanka. Leading his side from the front, and to the title win, Sarfraz earns the right to lead the tournament XI.

Every team wants to have a cricketer with the X-factor, one who may not perform consistently, but on his day will win you the game single-handedly. Pandya is one such player for India. In the first match, he hit Imad Wasim for three consecutive sixes in the final over of the innings. In the final, Pandya cracked 43-ball 76 in a losing cause, waging a lone battle. He hit 6 monstrous sixes during his knock and finished the tournament with most sixes 10. Add his 4 wickets, and he becomes a must-have player for any XI.

In a tournament where spinners struggled on the whole, Adil Rashid emerged as the best in the business. In the three games that he played, Rashid picked up 7 wickets, with 4 for 41 against Australia being his best effort. It was his spell that pegged back Australia after they were cruising, and restricted them to a modest 277.

Josh Hazlewood and Liam Plunkett got more wickets than Bhuvneshwar Kumar in the tournament. Mark Wood had a better economy rate than him. But where others lacked was consistency. Plunkett got all his 8 wickets in just two games and went wicket-less in the other two. Hazlewood got a 6-for when New Zealand batsmen were going all out in the death overs. Bhuvneshwar, on the other hand, chipped in with wickets in all the games. He was equally effective with the new ball as well as at death overs. Moreover, he was miserly too. In the final, where four of his other five colleagues leaked runs at over 7 RPO, Bhuvneshwar conceded just 44 from his quota of 10 overs.

PS. Mohammed Aamer misses out for the same reason, consistency. He went wicket-less against India and South Africa in the group stage.

The face of Pakistan s success in the tournament, Hasan Ali surprised all and sundry to emerge as the best bowler of the tournament. 13 wickets at an average under 15 and economy of 4.29 fetched him the Golden Ball award. What impressed the most, however, was his unrelenting energy, which was infectious. After going for 70 runs from his 10 overs for a solitary wicket in the first game against India, Hasan came back strong to pick up 3-fors in next four games. His post-wicket celebration, which resembles pumping of the blasting machine, subsequently leading to a bomb explosion, also won many a heart.

Junaid Khan was another reason behind s Pakistan s success. He got the opportunity only when Wahab Riaz limped out of the tournament in the first game. He was consistent throughout the campaign, picking up 2 for 53 against South Africa, 3 for 40 against Sri Lanka, 2 for 42 against England in the semi-final and 1 for 20 in the final. Many wondered as to why he did not feature in the starting XI from the beginning. But it was better late than never for Pakistan. 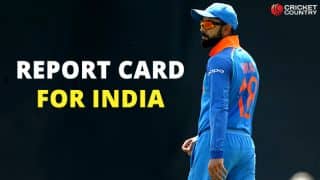