"One thing is for sure - that England can t afford to take the Men in Green lightly. If England does that, it can be in for a real shock on Wednesday," says Shahid Afridi

After bundling out Sri Lanka for 236 and racing to a 74-run start without loss, Pakistan had no business losing the game. But then again, after crashing to 162 for seven, Pakistan should have not won the game either!

From a state of misery, Sarfraz Ahmed and Mohammad Aamer forged an unforgettable 75-run alliance to take the eighth-ranked side in the ICC ODI Team Rankings to the semi-finals of the ICC Champions Trophy 2017.

It was truly a nerve-wracking encounter between two teams who made quite a few errors in the game. Pakistan owes it to its pugnacious captain and the icy cool Aamer for a memorable win in a match that it dominated, yet had to put in a mighty struggle to win.

The fact of the matter is that despite a heroic victory, Pakistan had to once again rely on individual brilliance to pull the team out of the doldrums. There were no demons in the Sophia Gardens pitch, yet Pakistan crumbled in a heap after a blazing start by Fakhar Zaman and Azhar Ali. FULL CRICKET SCORECARD: Sri Lanka vs Pakistan, ICC Champions Trophy 2017, Match 12 at Cardiff

In my match preview, I had written that Pakistan s senior men need to come to the party if they are to score a win. Sarfraz handled the pressure magnificently although he was incredibly lucky with two dropped chances – especially the one put down by Thisara Perera off Lasith Malinga which broke the Sri Lankan spirit.

The fact is that the senior batsmen disappointed again at the big stage. Players like Mohammad Hafeez and Shoaib Malik have abundance of experience and both have represented Pakistan for a very long time.

One of them needed to carry the burden today and take the team past the victory target. Unfortunately both fell in quick succession while Azhar Ali also failed to make use of a fine start, which put the lower-order under enormous stress.

I really hope that Malik and Hafeez come good in the semi-final since the team would be pinning its hopes on them, especially against a top-class English unit, which unlike Sri Lanka, isn t expected to give Pakistan chances of coming back in the game.

We all know that chasing is a real challenge for Pakistani teams regardless of the score. We have traditionally made heavy weather of some small chases and on Monday we almost threw the game away chasing another below-par score.

The semi-final against a confident and in-form England side is going to be an uphill battle for Pakistan, especially if the batting doesn t fire. I really hope that the seniors can take a leaf out of Fakhar s book and play with a free mind.

Fakhar has been a revelation and once again played with an uncluttered mind. I feel that he has to work hard against the short ball since teams with a strong pace battery are likely to exploit his weakness against the rising ball.

All in all, his approach at the top of the innings is refreshing indeed and I hope that he continues to bat the same way in the games ahead. Many Pakistani youngsters have lost their natural style of play due to the fear of getting dropped from the team after a string of failures.

Fakhar must be handled carefully by the management as he can be an asset in the future and must be persisted with even if he fails for a few matches.

In the end, I must applaud the outstanding bowling effort by the Pakistani bowlers today. Junaid Khan, Mohammad Amir and Hassan Ali bowled brilliantly and made a grand comeback in the game after the Sri Lankans had set a foundation for a potentially match-winning total.

The Sri Lankan mid-innings slump was largely due to the penetrative bursts by Junaid and Amir, who were ably supported by Hassan in the middle and late overs. The trio found enough movement off the pitch as well as in the air to make life tough for the Sri Lankan middle and lower order.

I was also impressed by young Fahim Ashraf who bowled gainfully for his two wickets.Fahim also looked assured with the bat before his unfortunate run out.

I really hope that Pakistan fights hard against England in the semi-final and we see a real fighting effort by the players. One thing is for sure – that England can t afford to take the Men in Green lightly. If England does that, it can be in for a real shock on Wednesday.

I am hoping for another spellbinding Pakistani performance. 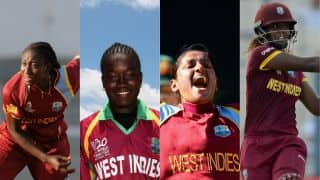