It was a hard task in hand for India, chasing 329 to win but the crowd was on their side in SCG as the Indian fans outnumbered their Australian counterparts in the stands. I

The road to glory ends at the Sydney Cricket Ground (SCG) for the defending champions India. Prior to the tournament, all sorts of things were said about the Indian team. The bowlers received tons of criticism from all around and the fans had little hope from the team after their miserable outings in the Test series in Australia, followed by the tri-series. (Australia vs India in past World Cup matches)

But come the big stage, India showed their dominance in the limited-overs format. It was set-up by the win against arch-rivals Pakistan followed up by tournament favourites South Africa. And their impressive run started, winning seven games in a row, the bowlers picking all the 70 wickets and batsmen showing their class while setting the score and chasing. It came down to the semi-final and a mighty effort from Australia to stop Dhoni’s men’s 11 match winning streak in World Cup. At the end of the day, India finished second best against Australia in the second semi-final of ICC Cricket World Cup 2015, losing by 95 runs at SCG.

Australia won the toss and elected to bat first. They were on song from the word go, the out of form Aaron Finch (81) had a slow start but played a crucial part in the partnership with the run machine Steve Smith (105), whose century set the stage for the big score. Cameos from Glenn Maxwell (23 off 14), James Faulkner (21 off 12) and Mitchell Johnson (27 not out off 9) helped Australia scored a record-breaking 328 for seven in 50 overs; the first team to score over 300 in a World Cup semi-final. The much improved Indian bowlers had a tough outing on the big day, Umesh Yadav (four for 72) and Mohit Sharma (two for 75) picked up the most wickets but were on the expensive side. It was actually Ravichandran Ashwin (one for 42) who was the pick of the bowler for India who slowed down the run flow in the middle overs. (Australia vs India: Pick of the tweets)

It was a hard task in hand for India, chasing 329 to win but the crowd was on their side in SCG as the Indian fans outnumbered their Australian counterparts in the stands. India looked in control of the chase but wickets made the difference and that is when Australia came hard at the Indian batsmen. Shikhar Dhawan (45) was aggressive but threw his wicket away while Ajinkya Rahane (44) played the building-up role when India were four down for 108 in 23 overs. It was too much in the end, even for captain MS Dhoni (65) as India were bowled out for 233 in 46.5 overs, losing by 95 runs. Australian bowlers maintained their repuation of being lethal; James Faulkner (three for 59) along with Mitchell Starc (two for 28) and Micthell Johnson (two for 50) wrapped up the Indian innings.

Steve Smith was awarded the man-of-the-match for his brilliant century and alertness on the field. A dominant Australia moves into the final to face New Zealand at Melbourne Cricket Ground (MCG) on Sunday. India can be proud of their run in the tournament, they played good cricket but unfortunately they faced a better side. With the win, Australia creates a new record of seven wins in seven World Cup semi-finals they have played in. 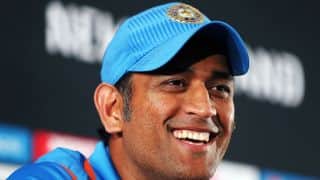