While Australia is a sporting country, it doesn’t have a very prominent craze for cricket.

Melbourne is a global city with a diverse population. Sport is an important part of this city with it playing host to some of the most iconic events. Nishad Pai Vaidya takes a tour around the city and writes about the beauty of being in Melbourne for the ICC Cricket World Cup 2015, or any sporting event for that matter.

From the quiet and serene Adelaide, India movedto the lively Melbourne. The peace of Adelaide was a refreshing change if you were flying down from a city like Mumbai. Head to Melbourne and your life is back on the fast-track. The thing that first strikes you about Melbourne is the diversity. You find people from all parts of the globe in this city. With them, they bring their exotic cuisine — which you’d enjoy if you are a foodie. Melbourne doesn’t disappoint you and although you have come here for the cricket, you would invariably explore the city!

If you are visiting Melbourne for the first time, the trains, trams and the roads may confuse you — perhaps intimidate you at times. On a map, two points may be about 500 metres apart, but on the ground, it is a different story. With the changing altitudes, you may end up walking a lot more once you have underestimated the distances. After all, you look at the map on a two dimensional surface! Basic science isn’t it!

Getting to the Junction Oval meant a long tram ride. As India and South Africa practice at the venue, one could absorb the beauty of it. It aptly pictured Melbourne in a shot. With the modernity of the big buildings around it, there was a bit of an old world charm, with of course a bit of cricket — symbolising the sporting element of this city. This is one of the greatest sporting cities in the world. There’s the Melbourne Cricket Ground (MCG), the Albert Park for Formula 1 and the various tennis arenas. With all that in one corner of the city, the sporting spirit is truly intact. Then there are the AFL grounds in the city as well.

After practice on Wednesday, some of us tried to make our way back into the city from the Junction Oval, the tram lines had us confused. Waiting at one of the stops, we saw many trams turn after the previous station. When we looked at the other end, dozens zoomed by. A cricket fan from Singapore joined us, who had specially flown in for the India-South Africa game. “I regret not being at the India-Pakistan game last week. You guys were there. How was it?” he asked. Equally confused by the trams, he then helped us chart our way out, due to which, we finally found our way through. ICC Cricket World Cup 2015: POINTS TABLE

Once you get into the city, we were immersed by that very diversity. Heading down towards the Yarra River, one can see a very interesting pun under a bridge. There is a poster with two cricket balls. It read, “MISSING: Pair of balls. If found please return to the English cricket team #MissingBalls.” We chuckled and took pictures, when we heard someone say in a British accent, “Wait there! Why are you doing that!” That diversity was back to shock us, for the people standing right besides us were from England. ICC Cricket World Cup 2015: SCHEDULE & MATCH DETAILS

While Australia is a sporting country, it doesn’t have a very prominent craze for cricket. There is no hype, hoopla or frenzy with the ICC World Cup 2015 being played here. It is only when the games get closer that the excitement builds, mainly due to the visiting fans. Back in Adelaide, it only got exciting once the India and Pakistan fans arrived. One can expect the same here. Unlike India, the passion and the craze for cricket is not very prominent. During a World Cup in the subcontinent, everyone is talking about it. The posters etc are in your face and the World Cup is everywhere you look. That isn’t the case here. But, talk to anyone on the street and they know that the World Cup is going on. Perhaps, they are reserving their excitement for the crucial stages of the tournament. ICC Cricket World Cup 2015: Complete Coverage 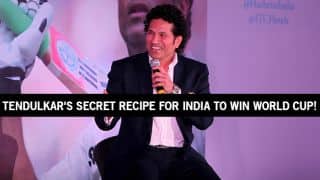