Dilip Vengsarkar feels India missed a trick by not including Yuvraj Singh.

Part of the 1983 World Cup-winning team, Dilip Vengsarkar knows a thing or two about pressures while going into the tournament as defending champions. The former India captain tells Taus Rizvi that current Indian team has right combination and should be able to win the mega event again, adding that Yuvraj Singh‘s absence will hurt India.

Taus Rizvi (TR): You were a part of the Indian team that went in as underdogs in the 1983 World Cup before winning it…?

Dilip Vengsarkar (DV): There was no pressure as such. World Cup was not as hyped as it is now. So, there was no pressure, no expectations. West Indies were a champion side. They were winning both Test matches and One Day Internationals. It was a tremendous side. It had a lot of depth. England and Australia were good sides too. Of course, India, Pakistan and New Zealand were more or less of the same quality.

TR: What happened then that India went on to win the World Cup?

DV: It was the confidence that we got before the World Cup after beating West Indies in the second ODI on our tour to the Caribbean Islands. Then we beat them at the Old Trafford and it further boosted our confidence. We started believing that this team can win. In the final, we put them under pressure by batting first and then crushed them before they got into the winning mode. The conditions in England suited us as we had more seaming all-rounders and a well-settled batting line-up.

TR: The Indian team went in as defending champions in the 1987 World Cup unlike as rookies in 1983. How different was this?

DV: Following the World Cup victory in 1983, we won the Benson & Hedges Cup in 1984-85. That was a big tournament. And we were doing pretty well in the ODIs. So the 1987 World Cup was a much hyped event, called Reliance World Cup, probably because it was being played in India for the first time. India started as favourites and India and Pakistan were supposed to meet in the finals since it was happening in the subcontinent. It was quite hyped.

DV: There will be a lot of expectations from the Indian team especially, in the ODIs, having done well under Dhoni. We have been doing extremely well in the limited overs format, so there will be a lot of expectations from this team. In 1987, since we were doing well in the ODIs and with the World Cup happening in the subcontinent, we were favourites and of course, as defending champions too there was a lot of pressure. However, in the current scenario we have actually not won much in the last couple of years. It is important we get wickets and not just contain runs in the middle overs. Also important will be how we apply breaks on the opposition. Unfortunately, we don’t have Amit Mishra, a leg-spinner who could have proved handy there. He bowls slow in the air, could have got bounce and spin. But he is not there. Even the presence of Yuvraj Singh in the middle order could have boosted the team, unfortunately, that has not happened either and that will hurt India, I feel.

TR: Does India have the potential to retain the World Cup?

DV: Definitely. And why not? Once you get into the groove, it is difficult to stop us. We are good in this format and have a good batting line up. Yes, there is a weak link in bowling which we can practice and try to sort out during the ongoing tri-series and then in the practice matches before the major event starts.

TR: Do you feel this is the right combination for India going into the World Cup?

DV: To be honest it’s the best we have. We don’t have options, even in the bowling department. The players have been involved in all formats of the game. We are unable to rotate them. It would have kept them fresh, which I think is a problem. Umesh Yadav, Varun Aaron, Bhuvneshwar Kumar, Mohd Shami, Ishant Sharma is what we have.

TR: India are yet to taste a win in Australia. They lost the Test series and then the first two ODIs of the tri-series. Will these defeats affect India’s performance at the World Cup?

DV: In cricket as of now our first big match is against Pakistan and it is most important. If we win the tri series or lose against Australia, it is not a concern. First game against Pakistan is a big match. If we can beat them, it will set the tone for the rest of the tournament. Beating Pakistan is the most important and the ultimate thing and will definitely prove to be the best possible morale booster for the team.

TR: You said the bowlers are a worry and look out of sorts. How they can pull themselves up before the big event.

DV: It will be a different scenario once the big event starts. I am sure they will have a spring in their walk and will get into the rhythm given the magnitude this event. Spinners will play a huge role in the ODIs especially in Australia. The 20 overs in the middle, between 15-35, are crucial for any team’s spinners. And getting wickets will be the top priority.

TR: Shikhar Dhawan has not been in great form. Sunil Gavaskar, however, has said that the southpaw should be given a longer rope. What is your take on the left-right combo that Dhawan provides at the top of the order?

DV: I think this combination is very important because it forces the bowler to keep changing his line and length. If Dhawan gets going then it is very difficult to stop him. He is an explosive batsman and a very good fielder and will come very handy.

TR: You must be happy that Rohit Sharma returned to form with a hundred in the tri-series opener after a poor run in the Tests.

DV: It is good. We expect a lot from him. It will definitely give him a different kind of confidence ahead of the World Cup.

TR: Virat Kohli has been in superb form. How would you describe him at the moment?

DV: He is the best batsman in the world. He has been in great form. There will be a lot of expectations from till the very end. And if he continues to do well, it will be a great thing for India and the players around him. He is a confident boy whose batting is infectious and it rubs on to others.

TR: India had a forgettable Test series in Australia. Will it affect the performance of the team in the World Cup?

DV: I don’t think, ODI is a different format. However, we are playing a tri-series and a couple of friendly games, which will put us into the groove. 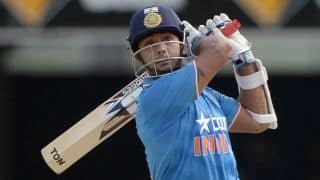 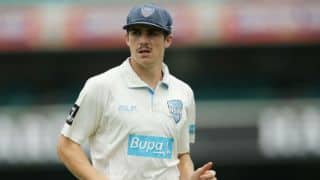