West Indies' current crop of fast bowlers aren't as potent as India, but is capable of inflicting some serious damage.

NOTTINGHAM: Within the opening few minutes of “Fire in Babylon”, the famous 2010 documentary depicting the might of the West Indies in their prime, a 17-year-old is seen. He is young, a look of determination fills his eyes as he runs in to bowl in the backdrop of a beautiful sea in the Caribbean. It is there that you know the kid is special.

Nine years since the release of that documentary, that 17-year-old kid is now the captain of the West Indies, leading the team in his second straight World Cup. Jason Holder is the leader of a side that not many predict to go the distance but is very capable of bringing the element of surprise in the game. It is that same element that has allowed West Indies to occasionally thrive in the last decade.

West Indies seem to have come a long way from their days of old, and today, if one is to draw parallels between the sides of both eras, there isn’t much in common, except a certain something called fast bowlers. Think of the mighty West Indies of that era and the first thought that comes to mind is its vicious fire-breathing fast bowling line-up. Joel Garner, Michael Holding, Malcolm Marshall in the 80s, succeeded by Curtly Ambrose and Courtney Walsh in the 90s. The 2000s had its moments with the likes of Corey Collymore, Mervyn Dillon and Ravi Rampaul, but none could really spit any fire.

Fast forward to Friday. West Indies opt to bowl in overcast Nottingham in their World Cup opener. They face an opponent who are coming off 10 straight losses. What better way to throw them off guard by introducing your best forte, the fast bowlers. West Indies’ fast bowling stocks are not as potent as India, or a South Africa or even an Australia for that matter, but this crop of pacers has promise, one that can inflict some serious damage.

Unfortunately for Pakistan, they were at the receiving end of a vintage West Indies pasting, with their pacers paving the way for a memorable seven-wicket thrashing. For the West Indies, it has always been the little things that have mattered, the biggest case in point being Andre Russell and his fitness. The marauding allrounder, for all his wonderful exploits in the IPL last couple of months, bowled just 14 overs. His hand was far from 100 percent, and despite that he ended up showing 11 wickets for his efforts.

On Friday, we witnessed just how big an asset Russell’s bowling could be when fit. He bowled just two overs, before being taken off the field after seemingly hurting his lower left leg. But in those two overs while he was fit, he set the tone for the remainder of the match. If this was to be related to the cult TV series Game of Thrones, Holder could be compared to Daenerys and Russell, Drogon. He handed the ball to Russell and Dracarys! Two overs, a barrage of bouncers, two wickets and one maiden. With the disappointment of a year-long ban behind him, Russell bowled a game changing over.

And while he did the initial damage, Holder, very quietly as has been his persona, chipped in with three wickets himself, all three coming in a span of nine deliveries. After being plundered for 20 off his first two overs, Holder returned to snuff out his counterpart Sarfraz Ahmed down the leg before sticking to the blueprint of bouncing out lower order batsmen Imad Wasim and Hasan Ali.

But mostly, the day belonged to a youngster, who had the dream World Cup debut. When Oshane Thomas made his T20I against India, he cleaned up two of the very best the team has to offer, Rohit Sharma and Shikhar Dhawan, both beaten for pace. Thomas, 22 picked up a five-wicket haul at home against England, whose batting goes fairly deep. Two of the five he dismissed were the skipper Eoin Morgan and Jos Buttler, one of the hottest picks going around at the moment. Both were beaten for speed, the ball climbing on to them and taking the edge.

Thomas has been talked about as the next big thing in international fast bowling, and provided he can remain injury-free, it certainly remains a possibility. He is quick and can hurl the ball across the 22 years. He got Babar Azam, Pakistan’s top scorer and their best batsman by quite some distance, to nudge at a delivery that pitched on good length and moved away on a surface without much assistance. Thomas is just what you need to prevent the opposition’s tail from wagging and Holder knew he had found his man.

West Indies may not be anyone’s favourites in this World Cup, but there lurks a feeling which expects them to join India, England and Australia as perhaps the fourth probable semi-finalist. They hardly had supporters at the ground, in comparison to fans of Pakistan, which if was to be compared, brought to mind a particular scene in the penultimate episode of GOT, when the army at Kings Landings stares down Daenerys’ compromised Unsullied. But West Indies’ fire breathing dragons may have ensured a few more people turning up for the remaining eight games. 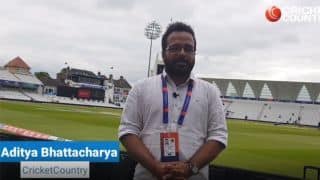