1. ICC Cricket World Cup 1999 against Pakistan: The ICC Cricket World Cup victory was probably the most famous in the history of Bangladesh cricket. This victory against Pakistan gave them the required identity in World Cricket. Critics even say, only because of this win Bangladesh were prematurely given the Test status by then International Cricket Council (ICC) President Jagmohan Dalmiya.

In the English summer of 1999 the ICC Cricket World Cup was held in England. It was Bangladesh’s first appearance in World Cup: they had won the ICC Trophy in 1998 (winning a nail-biter against Kenya in the final) and qualified for that tournament.

Northampton County ground hosted the historic encounter on on May 31, 1999. Wasim Akram elected to bowl first on a cloudy morning. He has (perhaps rightly) backed the big guns like Waqar Younis, Shoaib Akhtar, Saqlain Mushtaq and himself to destroy the inexperienced Bangladesh batting. But that was not to be the case.

Bangladesh posted a decent 223 — a fighting total by 1999 standards — thanks to some useful contributions by Shahriar Hossain and Akram Khan.  In reply the Pakistan top-order collapsed like a house of cards. They were reduced to 42 for five and were eventually skittled out for 161 thanks to a memorable spell by Khaled Mahmud (three for 31), the present manager of the team. For his all-round show, he was named Man of the match.

The contest on March 17, 2007 at Queen’s Park Oval was the first match of the tournament for both sides. Rahul Dravid decided to bat first, but the decision backfired as the strong Indian batting line-up managed to score only 191 on a track with some moisture. Mashrafe Mortaza, the present skipper, took four for 38 to script a famous win.

Habibul Bashar-led Bangladesh chased down the target thanks to three inspired knocks by Tamim Iqbal, Shakib Al Hasan and Mushfiqur Rahim. Mortaza was named Man of the match award for his match-winning spell. With that victory, Bangladesh qualified for the Super Eights at the expense of India.

In the second half, on a spin-friendly track, the South African batsmen looked like fish out of water in front of the brigade of Bangladeshi left-arm spinners. They were all-out for just 184. Ashraful was named Man of the match for his blistering knock.

4. ICC Cricket World Cup 2011 against England: Bangladesh were one of the hosts in 2011, and hosted England at Chittagong on Match 11, 2011. Shakib, by that time Bangladesh skipper, asked England to bat. The tourists managed to score only 225 in their innings.

While chasing Bangladesh were once reduced to 169 for eight following an inspired start provided by Imrul Kayes. But Mohammad Mahmudullah and Shafiul Islam played crucial knocks, and Bangladesh registered another memorable victory in ICC Cricket World Cup. Kayes was judged man of Match for his crucial 60. 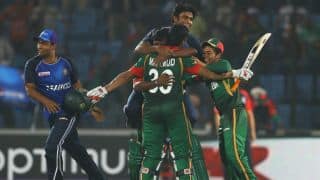