Even as the spotlight of world cricket rested on England, with the ups and downs and excitement of the Champions Trophy, just across the small stretch of North Sea a quaint tournament was contested in the picturesque grounds of The Netherlands. Arunabha Sengupta visited the VRA cricket ground, Amstelveen, to take a look at the France–Norway contest in the ICC World Cricket League (Europe Region Division One) encounter.

Under the characteristic low skies of Netherlands, the unusual sight of a game of cricket with giant sequoias as the backdrop.

With the Schiphol Airport just a stone s throw away, there is hardly any international ground in the world where the planes fly this low and this frequently. Sometimes the noise of the aircrafts drowns the sound of willow on leather and even throaty screams of How s That? Umpiring is not really the easiest job on this ground.

This being The Netherlands, the cricket is played in obscurity. Not a lot of Dutchmen are aware that there is a game in town. The teams that have travelled thus far to contest the matches have to double up as spectators.

In all there were 31 people in the ground, and that included the cricketers. Of these all but four had Indian and Pakistani origins. Of this select four, two were the officiating umpires.

For all the obscurity of the game in the land, the pavilion is a beautiful one with an old fashioned club house and a fully-functioning electronic scoreboard.

Yes, the game is played like the modest violet that grew down in a green and shady bed, away from the public eye. Yet, when we look at the sight screen, we realise that there is at least some sponsorship. 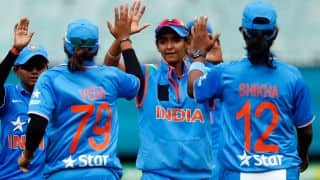