It was supposed to be a tough battle, but the Pakistan fast bowlers blew New Zealand away at Old Trafford on June 16, 1999. Abhishek Mukherjee looks at the day when New Zealand capitulated against Shoaib Akhtar’s thunderbolts.

Cricket, more so the limited-overs versions, is a batsman’s game. It is not every day that a batsman scores a match-winning hundred, and a bowler with figures of 10-0-55-3 is named Man of the Match. Unless you are Shoaib Akhtar, that is. And this was Shoaib Akhtar at his peak.

It was not only about the fire with which he bowled. There were three scorchers — two fast, one slow — all of which hit leg-stump. Shoaib was as accurate as anyone; he disguised his variations well; he tormented most batsmen who faced him (though he strayed at times); and each of the wickets pushed New Zealand back from their ascension towards a big score.

But it was more about the raw pace. He broke the 100-mile-per-hour barrier earlier in the tournament, and never seemed to lose his searing pace; on this occasion against New Zealand in the semi-final, he bowled as fast as ever. Fortunate were those who had witnessed it live, for seldom has such raw energy and power been unleashed on the biggest stage of all.

Stephen Fleming decided to bat on what looked like a flat track. Wasim Akram started with a wide and a no-ball, and bowled a second no-ball in the over. Shoaib, at the other end, started with an 87 mph screamer, and clocked 90 mph off his fourth ball; Matt Horne was late in his defence, but somehow survived. The next ball was aimed at Horne’s hips; the edge flew over gully.

The first ball of Shoaib’s second over was pitched short, and came at Horne’s ribs at an alarming pace; trying to jab it away, Horne somehow found an outside edge, and the ball flew over second slip for four. A fuming Shoaib sent down a 94-mph thunderbolt, and the next ball bounced way above Moin Khan’s head for five. Twelve runs from two Shoaib overs.

Meanwhile, Wasim had been teasing Nathan Astle at the other end with his movement. Horne edged the second ball of Shoaib’s third over, and the ball fell short of Azhar Mahmood at second slip. The batsmen scampered for a single. The next ball was too quick for Astle: it was straight, pitched on a length, sped through the gate, and flattened the leg-stump.

Wasim had taken Shoaib off after a spell of 4-0-19-1. He himself removed Craig McMillan early, but once Abdur Razzaq and Saqlain Mushtaq came along, Horne eased into the proceedings, hitting three boundaries. Then he fell to Razzaq; this brought Fleming to the crease.

Roger Twose, hero of the Australia match, was at ease at the other end. Wasim tried Mahmood, even a teenaged Shahid Afridi, but to no avail. With New Zealand sailing smoothly at 130 for 3 after 31 overs, Wasim brought Shoaib back. Twose tried to pull the second ball but mistimed; the fourth rocketed past his bat; Moin somehow managed to save his own face (literally), bringing the gloves in time.

Fleming was on strike when Shoaib bowled the next over. He played the first ball to point, and cut the next through cover-point for four. The third ball was played to third man, where Inzamam-ul-Haq let it go between his legs to the ropes. Shoaib was not amused. He was even more livid when Saqlain mis-fielded the on-drive off the next ball, and the batsmen ran a brace.

What followed was probably the ball of the tournament: the yorker came at 92 mph, about 15 or 20 more than what Fleming anticipated; the ball crashed into the base of the leg-stump by the time the bat had come halfway down. The stump was flattened, but the psychological damage it caused to New Zealand and her captain was way, way more than that.

Wasim had taken Shoaib off after 3 overs. His figures read 7-0-36-2 when he was brought back to bowl the 46th over with Chris Cairns and Chris Harris.

shaping up for the final burst. Three balls went by. As Shoaib steamed in, Harris, expecting yet another thunderbolt, tried to play through the line: the cannily disguised slower pegged the leg-stump back.

New Zealand managed to finish with 241 for 7 (47 of which were extras, including 17 wides and 12 no-balls) thanks to Cairns’ late burst. Shoaib’s figures of 3 for 55 could well have been 6 for 15 on another day. But then, as authors and commentators would often say, “it is a great leveller, this sport.”

New Zealand never put up a challenge. Saeed Anwar and Wajahatullah Wasti brought up their 50 in the 9th over and 100 in the 27th, and never seemed like getting out. Anwar won the race to the fifty, and just when it seemed both men would reach their hundreds, Wajahat holed out to Fleming at mid-off.

Ijaz Ahmed walked out with a vengeance and went after every ball, taking Cairns for consecutive boundaries and dismissing Astle over long-on for six. Anwar steered Astle the same over to bring his second consecutive hundred; it was also his 17th ODI hundred — at par with Desmond Haynes and behind only Sachin Tendulkar.

Then, suddenly, when Geoff Allott beat Ijaz’s outside edge (Pakistan needed 6 off 21 at this stage), there was an attempted pitch invasion (why?) which resulted in a ten-minute hold-up. Then, with 15 balls to spare, Anwar lofted Astle towards long-on; Twose, instead of going for the catch, raced towards the pavilion, as did his teammates, the batsmen, and the umpires.

The ground was taken over in a matter of seconds. Wisden wrote: “Ecstatic Pakistani fans let off fireworks and paraded flags, banners and a cardboard cut-out of Nelson Mandela (who had retired from the South African presidency earlier in the day).” Fleming later raised issues regarding security at the post-match presentation, insisting on fences to restrain spectators.

Richie Benaud, to everyone’s delight, named Shoaib Man of the Match. He may well have announced it at the interval.

Australia tied the other semi-final against South Africa at Edgbaston, but went through for their performance in the Super Sixes. They beat Pakistan by 8 wickets in the final at Lord’s.

Man of the Match: Shoaib Akhtar. 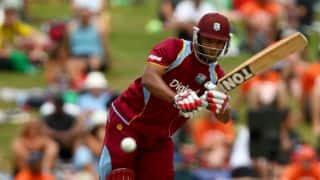 Kieran Powell unhappy with WICB's treatment towards him; steps away from cricket temporarily