Cricket witnessed an epic clash between Brett Lee and Shane Bond at their primes that day.

The world of cricket witnessed an epic clash between two fast bowlers at their prime on March 11, 2003 at St George’s Park. Unfortunately, one of them was let down by his batsmen, while the other was not. Abhishek Mukherjee looks at when Brett Lee triumphed over Shane Bond on a day that celebrated fast bowling at its prime.

There they were, breathing fire, raring to go out at the hapless men with willows, to batter and bruise them, to send stumps and banish them to the safe recluse of pavilion; the strip of St George’s Park strip, with a “muddy shade of pale”, looked tempting to both Shane Bond and Brett Lee. They awaited their turns to be unleashed.

Who was the better of the two? Lee was certainly the quicker, but on his day, few could match Bond: he was fast, accurate, could move the ball late, and could extract menacing bounce from the pitch; the combination made him one of the deadliest bowlers in the World Cup — provided he was fit.

Unfortunately, Bond was alone (with an injured Chris Cairns playing as a specialist batsman, Daniel Vettori was his only world-class bowling colleague) in the attack, while Lee took second over for Australia behind Glenn McGrath; the attack also consisted of Brad Hogg and Andy Bichel, both of whom were in tremendous form. The Australian batting line-up was superior as well, which made Bond’s task all the more difficult. Not that he minded.

Stephen Fleming was perhaps right in putting Australia in. Bond was unleashed straight away; he sent down a wide and a no-ball, and conceded seven in the opening over. At the other end, Adam Gilchrist smashed Andre Adams for two fours. The score read 16 without loss after 2 overs. So far, so good, for Australia.

The ball that got Matthew Hayden kicked off a length and kissed the outside edge on its way to the gauntlets of Brendon McCullum; Gilchrist was trapped leg-before by one that moved in sharply; and Ricky Ponting went for an expansive drive and ended up edging it. Australia were left reeling at 31 for 3, all three men falling to Bond.

Fleming gave Bond a breather and made Adams change ends. It worked immediately as Darren Lehmann edged one to gully. There was a brief resistance between Damien Martyn and Michael Bevan before Fleming brought Bond back. Once again Bond struck; all Martyn managed to do was edge the snorter.

The next ball was a toe-crusher that got Hogg; and though Ian Harvey saved the hat-trick, his middle-stump was soon pegged back by Bond. Australia were reeling at 84 for 7 in the 27th over. Bond’s figures read 8.3-1-21-6; he had as good as sealed the match for the Kiwis.

The first part of the job was to see Bond off. They did that, letting Bond finish with 10-2-23-6. Though both Vettori and Chris Harris sent down economic spells, the men feasted off Jacob Oram and Scott Styris. They stuck to a plan: Bichel took the risks while Bevan concentrated on singles. The pair added 97 in 128 balls. Australia, in the end, won by 96 runs, which put the partnership in perspective.

Not surprisingly, Bevan scored a mere 36 (he fell for 56) in the stand to Bichel’s 56. Bichel himself fell for 64 in the last over, but the damage had been done. The partnership involved a hilarious incident: Adams attempted a slower ball that slipped off his hand; the ball bounced twice before reaching the other end; Bichel waited till the ball reached him — outside off — and smacked it over wide long-on for six.

Lee thwacked Oram for sixes off the last two balls of the over to take Australia past the 200-mark. They finished on 208 for 9. On a side note, McGrath remained unbeaten on a 2-ball 3: such was Australia’s dominance during the era that the outing remained the fourth — and last — innings of McGrath’s 39-match World career.

Perhaps with the aim to take the bull by its horns, Fleming promoted Vettori to open with him. The ploy did not work: Vettori managed a boundary (and a five, thanks to overthrows), but flashed at one outside off, and McGrath drew first blood. Three balls later Nathan Astle fended one to slip, and when McGrath removed Scott Styris, the score read 33 for 3 in the seventh over.

Cairns walked out and started with two fours from the first four balls he faced. Fleming played out a maiden to Lee at the other end, and Cairns smashed McGrath for six in the next over. With Fleming also joining in with three boundaries, New Zealand raced to 63 for 3 after 11 overs. Lee had to be taken off after conceding 31 off 5 overs. New Zealand were back in the match.

Ponting quickly switched to Bichel and Harvey. Cairns, trying to clear the boundary off Bichel, holed out to deep third man; and though Fleming kept the counterattack going, Lou Vincent edged one off Harvey to slip with the team score on 84 for 5. New Zealand still needed 125, but Fleming was on a rampage — and they still had Harris, McCullum, Oram, and Adams to support him.

… but Lee polishes things off

Fleming and Harris another 18 before Lee struck. It was an awful short delivery outside leg; Fleming went for the pull, but the ball, despite the poor line and length, hurried on to Fleming, and he could only edge it to Gilchrist; a screaming yorker got McCullum LBW; Oram fished for a thunderbolt first ball that crashed on to the stumps; Adams was bowled by a yorker that was too fast for him; and poor Bond, going for a desperate wild slog, mistimed and gave Lee a diving return catch.

Lee, expensive in the first spell, came back to finish things off with 5 for 3 from 14 balls. Wisden called him “a vulture bent on supper”. New Zealand lost their last 5 wickets for a mere 10, and the 112 they scored remains New Zealand’s lowest World Cup score.

Bond’s performance, one of the finest in history, ended up being the second-best spell (after Imran Khan’s 10-2-14-6) for anyone on the losing side. He was deservedly named Man of the Match.

– Following the two low-scoring matches, St George’s Park had the pitch inspected by the World Cup committee before the semifinal.

– Australia defended their title, while New Zealand did not make it to the semi-final.

– Neither Bevan nor Bichel had their central contracts renewed at the end of the year. Their international careers ended after the 2003-04 season.

Man of the match: Shane Bond. 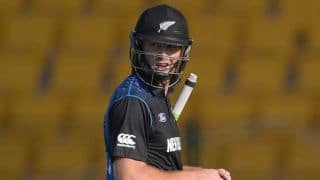