A breathtaking assault by Ricky Ponting and his men reduced ICC Cricket World Cup 2003 final to a one-sided romp.

March 23, 2003. A breathtaking assault by Ricky Ponting and his men reduced the World Cup Final to a one-sided romp. Arunabha Sengupta looks back at the day when Indians were demolished by some destructive batting by the Australian top order.

Australia had not failed to defend a total over 200 in the last 71 matches spanning over three years. Yet, when Sourav Ganguly won the toss at Johannesburg, he asked them to bat.

Perhaps the Indian captain did not want to expose his batsmen to the perils of Glenn McGrath and Brett Lee on a fresh pitch offering pace and bounce. Had he taken first strike would the result have been different? One can only wonder. It had been a defensive and dubious call, but based on the evidence provided that day, Australia would have been very, very difficult to beat regardless of whether McGrath or Adam Gilchrist started the process of annihilation.

In the end captain Ricky Ponting’s motto of ‘intent and intimidate’ worked for Australia, overcoming the grammatical hash of abstract noun and verb.

Aggression — the calculated and the misplaced

In contrast, the aggression of India was woefully misplaced. Zaheer Khan and Javagal Srinath had bowled beautifully against lesser opponents. Now, on a pitch offering pace and bounce in the final, they sprayed the ball all over the place. Zaheer seemed more intent on whispering ‘niceties’ in Gilchrist’s ear than pitching in the correct spots. And so much did he enjoy the banter that he stretched the first over to 10 balls. There were two no-balls, two wides, the second of those flying down to the fine boundary on the leg side past a bemused Rahul Dravid, keeping wickets. The first over cost 15 runs, and Indians never managed to wrest the initiative back.

There was a brief period when the hopes that had crashed down to the lowest nadir had tried a hand at resurrection — nourished by sprinkling rain drops, nurtured by dark clouds and hanging on to the coat-tails of Frank Duckworth and Tony Lewis. But, had the Indian team somehow sneaked in a win because of the weather and mathematical approximations, it would have been severe injustice to the Australians and the game of cricket. In the end, the rain stopped, not a single over was deducted and the better team won in the most emphatic manner possible.

Zaheer’s curious brand of aggression, reflected in a rather puny effort on the field of play, provided the impetus Adam Gilchrist needed. The first ball of the third over was smashed to the long-on fence. Matthew Hayden remained comparatively circumspect, but Gilchrist tore into the opening bowlers. Srinath found himself bludgeoned to all parts of the ground, five fours and a six taken off him before he himself was taken off. By the ninth over, Australia were 74 without loss.  The lone spinner in the form of Harbhajan Singh had to be introduced as a desperate necessity rather than a planned ploy as early as the 10th over.

It did bear fruit. Gilchrist, having rushed to his fifty in 40 balls, had retreated in some sort of a shell, managing seven off the next eight balls. Now he knelt down and hit Harbhajan against the turn, targeting the crowd beyond mid-wicket. The ball bounced a shade more than bargained for, and the ball shot up from the top-edge, hanging in the air for a while before Virender Sehwag ran in to hold the catch. It was 105 for one after 14 overs, the rate 7.50. But, the Indian fans around the world, a huge majority wearing the light blue colours of the team, at last had something to clap about, if not cheer.

The wicket did lift the Indians. For the next 5.5 overs they fought hard to get back in the game. Not one boundary was leaked and Hayden got a faint edge to the ’keeper. It was 125 for 2, just a ball short of 20 overs.  The Indians rejoiced on the field, and their fans revelled in the stands, in front of television sets, in all the movie theatres of New Jersey which were showing the match live.

Those who relished the moment were lucky, for it was to be the last cheer in the match bar a couple of Sehwag blows travelling through darkness and rain.

Ricky Ponting and Damien Martyn came together, and left the field together when the last ball was bowled. Initially, they approach was sedate — 50 in 52 balls, 100 off 109. Ponting waded his way through the first few overs, rarely deviating from the tried and tested road of safety. Martyn stroked the ball with a sense of timing that comes with divine gift, made more remarkable because he had missed the semi-final with a finger injury and was not expected to play in the finals. Threading through the field with exquisite placement, Martyn got to his fifty first, off 46 balls, with six fours. Ponting was rather glacial in comparison, getting to his half century off 74 balls and with just one hit to the fence.

He made up for it, though. His next 47 balls got him 90 with three fours and eight sixes. The gear was shifted, the engine roared, the innings took off, the run-rate soared. It was in the 39th over that the brutal assault was launched. Harbhajan bowled and Ponting stroked a single to bring up his fifty. The Australian captain then proceeded to hoist his eternal Indian tormentor over mid-wicket for a couple of sixes.

Ashish Nehra ran in, replacing the dazed spinner, starting with an attempted yorker. Ponting responded with a scything sweep, connecting with his bat held in one hand, and off it flew over the mid-wicket fence. Mayhem that was macabre.

Sixes now rained in the region between square leg and mid-wicket, as Ponting swivelled to pull and swing the hapless bowlers. Martyn changed his approach, content to play second fiddle, caressing the ball with grace. One such delectable stroke was essayed off the back-foot, with a straight bat through the covers, and it sailed over the distant boundary in a breathtaking six.

Ponting reached his century off 103 balls, and proceeded to belt the cover off every ball. Javagal Srinath came back for the last over, from the Golf Course End. As if influenced by greens beyond, Ponting teed off. Srinath was launched into the second deck. The last 10 overs produced 109, the last five 64. Srinath finished with 87 runs from his 10 overs. Ponting remained unbeaten on 140 from 138 balls. Martyn, in his equally crucial role, had scored 88 from 84. The partnership was worth 234. Australia finished on 359 for 2.

The response and the rain

Silence had descended on the Indians, in the great nation and the diasporas across the globe. The fans looked at one another, eyes glassy, senses shocked. On television, Mandira Bedi had been hired for garnishing the endless fare of cricket with her dazzling smile. And today, all she could manage was a flummoxed look — even the noodle straps seemed to have been stripped of colour. It was the image of India captured in the form of the popular anchor. The country did not know what had hit them.

Whatever tiny glimmer of hope had survived the onslaught was switched off when Sachin Tendulkar pulled McGrath’s fifth ball. It shot up vertically off the top edge and the bowler held it after waiting an eternity.

Sehwag, caught off a Lee no-ball, was the only one to show some mettle. Ganguly came in at No. 3 and played a few strokes, before the pace of Lee proved too much for him. Three balls later, Mohammad Kaif departed, edging McGrath to the ’keeper. It was 59 for 3, the target an impossible 301 runs away.

Now the skies turned as bleak as the Indian batting card. For a while, rain hovered in the air, with the unpalatable thought of the match replayed from scratch if 25 overs were not completed. In an attempt to rush through the overs, Ponting turned to his slow bowlers. Darren Lehman bowled the 14th and Sehwag took three boundaries off consecutive balls. Brad Hogg came on and Sehwag went over the cover for four, and followed it up with a six over long-on. There was just the faint spark of an impossible dream. What if the skies opened up and India were just ahead of the Duckworth-Lewis equation?

Ultimately rain did stop the game for a while after the 17th over, with India on 103 for 3. But, the weather gods were just. The players returned under lights after 25 minutes. Not a single over was deducted.

Sehwag continued to go after the bowling, Dravid nudged and pushed singles, rotating the strike. But, the asking rate climbed from steep to the realms of impossible. In the 24th over Sehwag drove Andy Bichel firmly to mid-off and tried to scamper across for an ill-advised single. Lehmann’s throw was quick and accurate. The stumps were hit with Sehwag out of frame. And the last source of cheer for the Indian fans walked back for 82 from 81 balls.

The remaining tale was of Australian triumph and Indian gloom, against the backdrop of threatening skies and distant thunderclaps. The huge difference of 125 runs between the sides could not have been more appropriate. Australians had cruised through the World Cup undefeated, notching up their 17th consecutive win in ODIs.

It was a relief that the Indian innings ended with more than 10 overs yet to be bowled. It saved the shell-shocked fans around the world prolonged torture. Finally, with the elements about to intervene again, it provided an outright win to the deserving side, without letting the purity of the result become diluted by the raindrops and associated mathematical manipulations.

Man of the Series: Sachin Tendulkar. 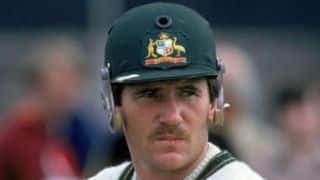