On February 23, 2003, a low-profile clash between Canada and West Indies during the 2003 World Cup was suddenly thrust into limelight, thanks to John Davison’s breathtaking century that threatened to cause a major upset. His hundred came off just 67 deliveries, a record for the fastest century ever in World Cup history at the time. Karthik Parimal travels back in time to relive that glorious day of cricket. Viv Richards presents the Man of the Match Award to John Davison of Canada after the ICC Cricket World Cup Pool B match between West Indies and Canada held on February 23, 2003 at Supersport Park in Centurion, South Africa © Getty Images

On February 23, 2003, a low-profile clash between Canada and West Indies during the 2003 World Cup was suddenly thrust into limelight, thanks to John Davison’s breathtaking century that threatened to cause a major upset. His hundred came off just 67 deliveries, a record for the fastest century ever in World Cup history at the time. Karthik Parimal travels back in time to relive that glorious day of cricket.
—
It wasn’t a match that generated much interest before commencement. But, being a Sunday, a crowd of 11,630 thronged the SuperSport Park at Centurion to see what they anticipated would be a one-sided contest between West Indies and Canada in the 2003 World Cup. Moreover, who wouldn’t want to miss an opportunity to watch the likes of Chris Gayle, Brian Lara and Carl Hooper treat the minnow bowlers with disdain! A hush engulfed the stadium the moment it was made known that the West Indians would field first. But unfolded took the breath away.

John Davison was not a prominent personality prior to this innings. He was born in Canada but moved to Australia to attend school, before paving his way into Australia’s domestic arena. He barely managed to carve a niche while representing Victoria, and later South Australia, and with an average that often hovered under 11, he failed to make the cut in the first-team of the state on a regular basis. Davison returned to Canada as a player-coach of a club team, but soon became an easy fit in the national side. He knew what it was like to be in a competitive environment now, but whether he could stand tall against a quality opposition was yet to be deduced.

During Canada’s first few games at the World Cup, there were hardly any indications of Davison’s prowess. The Canadian openers approached the first three overs of their innings against the West Indies in a manner typical of their underdog status, scoring just six runs. It was the fourth over — bowled by Pedro Collins — that saw the start of one of the greatest knocks in One-Day International (ODI) history. Davison cut the fourth legal delivery of that over, over point, to the boundary, before smashing the next one over covers for a six. A strong statement had been made.

He took Mervyn Dillon on in the next over, smashing him for three consecutive boundaries, the first a lofted shot over mid-on, next was a pull behind square and finally guiding the ball finer on the leg towards the boundary. Hooper persisted with Dillon and the latter’s next over produced runs too, as Davison quickly moved to 39 off just 24 deliveries. The West Indies were quite clearly stunned, and a change in bowling in the form of Vasbert Drakes didn’t help matters either. In 13 overs, Canada had coasted to 102 for one, and Davison had amassed 78 of those runs.

He was involved in two good partnerships during the course of his innings, but not once was he the pillion. He contributed 80 of the 96 runs that were scored in the first stand with Ishwar Maraj and 40 of the 59 in the next with Desmond Chumney. The ball was consistently being deposited into the stands, which aptly prompted one of the commentators to humorously state “South African airways must consider giving him (Davison) frequent flier points. He’s hit the ball all over the park.” None of the seamers — Collins, Dillon and Drakes  — were spared; the plundering was evenly distributed. Only the spin of Cooper and Gayle managed to earn some respect, but not before facing some of the wrath.

Davison reached his century, off just 67 balls, with an enchanting hit over the long-on fence, in just the 19th over which was bowled by Dillon. The knock was registered as the fastest ever ICC Cricket World Cup century at that time. 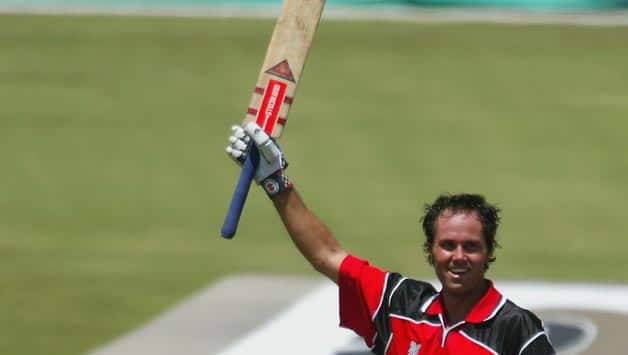 But 11 runs and nine deliveries later, while trying to smack the ball over the ropes for the seventh time in his innings, Davison was dismissed by what will go down in history books as one of the best catches ever. Drakes realised in the penultimate second that the ball was bound to go over him, and in a brilliant display of athleticism, stretched his hand out before tumbling with the ball in his hand to finish a spectacular catch. After surviving twice — two dropped catches and a ball that refused to dislodge the bails despite hitting the stumps — Davison had to walk back against the run of play.

When Davison’s wicket was accounted for, Canada were in a dominating position at 156 for three from 22.1 overs. However, the last seven wickets fell for just 46 runs, with Drakes as a protagonist. Needing 203 to win, the West Indies achieved the target in just 20.3 overs. Going at 10.04 runs per over — grand even by T20 standards — the chase produced the fastest run-rate ever in an ODI innings. Brian Lara scored the fastest ODI fifty, in 23 balls, a record which was previously held by Wavell Hinds for five minutes in the same match.

Entertainment is what the spectators at Centurion came looking for, and that is exactly what they got, albeit from unexpected quarters. It eventually was a one-sided game, but for a brief moment, an upset looked certain and inevitable.