On March 16, 2007, South Africa s Herschelle Gibbs became the first man in the history of international cricket to score six sixes in an over. The unfortunate bowler was Netherlands Daan van Bunge, who finished with figures of 4-0-56-0 after the carnage. Karthik Parimal looks back at that eventful day of the 2007 World Cup.

On March 16, 2007, South Africa s Herschelle Gibbs became the first man in the history of international cricket to score six sixes in an over. The unfortunate bowler was Netherlands Daan van Bunge, who finished with figures of 4-0-56-0 after the carnage. Karthik Parimal looks back at that eventful day of the 2007 World Cup.

As is often the case during the initial stages of a World Cup, a mismatched contest, this time between South Africa and Netherlands, was slated to be played at St. Kitts, Basseterre in the first round of the 2007 tournament. Both teams were to kick start their World Cup campaign and, at the time, the stadium, Warner Park, wasn t very intimidating thanks to shorter boundaries. The average first innings and second innings scores at the venue, in One-Day Internationals, was 286 and 196 respectively. That the Netherlands chose to field first was surprising, considering how matches had usually panned out there.

Owing to rain, the game was reduced to 40-over-per-side, since according to the tournament rules, the reserve day could be used only if there was no possibility of play, or if a minimum of 20 overs in both innings was not a certainty.

Despite losing AB de Villiers in the first over, Graeme Smith and Jacques Kallis came together to put up a century stand (114) in under 20 overs. Once the former departed, Herschelle Gibbs walked out to bat. He started off cautiously, steering the ball into the gaps and putting the loose ones away. It was not until the 29th over that he started to muscle the ball; he scored his first six of the game off skipper Luuk van Troost.

Little did anyone expect that the 30th over, bowled by part-time leg-break bowler Daan van Bunge, would be remembered for a long time to come. Despite conceding more than six runs per over, van Burge wasn t taken off the attack, partly because the other bowlers weren t very impressive either.

Below is how the event unfolded.

First six: van Bunge pitches it full and Gibbs treats it with disdain. He steps out of the crease and sends the ball sailing over long on. This goes even further than the six that was scored off Luuk van Troost in the previous over.

Second six: Pitches on leg, but Gibbs makes room to smash it over van Bunge s head. The ball thuds into the sight screen before wearily rolling back onto the field. Skipper Troost must have started to rue the fact that he persisted with a part-time bowler.

Third six: Fuller, quicker on the off stump, but Gibbs is quick to club it over long off, despite it uncharacteristically being an off-break. While warning signs become more ominous for van Bunge, the latter mildly acknowledges his fifty, scored in just 33 deliveries.

Fourth six: Having obviously been stirred by a barrage of maximums, van Bunge bowls a knee-length full toss that is hoisted over deep mid-wicket by Gibbs. The South African dressing room goes berserk. A message to hit out was sent by the think-tank a few overs ago, and they were now duly receiving more than what was asked for.

“The message came out that Jacques Kallis and I could have a dip, and we probably had a bigger dip than was needed. After the fourth one, I thought it could be on. I thought about using my feet and coming down the pitch, but then I changed my mind and decided to stay in the crease,” said Gibbs in an interview to ESPN Cricinfo.

Fifth six: In most scenarios, a spinner under heavy attack tends to bowl it flatter and shorter. In the case of part-timers, it s almost a given that they re going to resort to it. Gibbs, true to his plan, stay put at the crease, and a short, slow turning delivery that greeted him was swatted straight over the ropes. He was on the brink of making history.

Sixth six: A shocker from van Bunge, which was rightly pummelled by Gibbs over deep mid-wicket again. Short boundaries notwithstanding, this momentous six would have cleared most grounds in the world. The South Africans, watching the proceedings from the pleasant confines of the pavilion, went berserk; like the World Cup had already been won. Nevertheless, it was an apt reaction to the carnage led by one of their own.

Never before did such a feat occur in the history of One-Day Internationals (ODI); in fact, in internationals, although Gary Sobers in 1968 and, Ravi Shastri in 1985, had scored six sixes of a six-ball over in First-Class cricket. Yuvraj Singh did a Gibbs later that year against Stuart Broad in the ICC T20 World Cup.

Gibbs had moved to 68 from just 36 deliveries and, he would score one more four of the following over before being caught for 72. His innings comprised of four boundaries and seven maximums, and his strike-rate was a mammoth 180. South Africa had coasted to 219 for three in 31 overs at the time of his dismissal, and thanks to a blitzkrieg from the willows of Kallis and Mark Boucher who scored a 31-ball 75, inclusive of nine fours and four sixes they finished at 353 for three in their allotted quota of 40 overs, Kallis unbeaten on 128.

In reply, Netherlands could muster just 132 for nine, thereby conceding defeat by a mammoth margin of 221 runs. Daan van Bunge, though, will always be remembered as the first bowler to concede six sixes in a six-ball over in an international match. “It would be great to play Herschelle again and I wouldn’t mind if he tries to repeat that feat, but I am sure whatever he does, he wouldn’t be able to hit me again for 36 runs in an over,” he said, two years aftermath of that carnage, prior to the 2009 T20 World Cup at England. 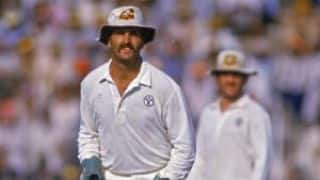 India vs Australia 2013: Ed Cowan hits back at Ian Chappell