Jeremy Bray's hundred was the first World Cup hundred by an Ireland batsman, but there was much more to the match.

Playing at Sabina Park on March 15, 2007, Ireland became the first team to tie their first World Cup encounter. Abhishek Mukherjee looks at one of the most unbelievable heists in the history of the tournament.

Canada had played their first World Cup match in 1979; Kenya, in 1996, and Scotland in 1999. Ireland and Bermuda, however, were the babies of the tournament. The Irish had done a decent job going into the tournament, but nobody gave them a realistic chance of making it big, even against Zimbabwe.

Ireland and Zimbabwe were placed in the same group as West Indies and Pakistan. There was grass on the pitch, which probably encouraged Prosper Utseya to insert Ireland. The decision turned out to be a right one as Christopher Mpofu found William Porterfield’s edge off the last ball of the first over; the ball popped out of Brendan Taylor’s gloves, but Vusimuzi Sibanda dived across from second slip to take an outstanding catch behind Taylor.

Bray to the fray

Ireland struggled against Mpofu and Edward Rainsford, managing only 6 from 4 overs before Jeremy Bray cut Mpofu for four, and two balls later slashed him over point for six. Eoin Morgan was dropped by Elton Chigumbura off Mpofu, and with four quick boundaries he saw Ireland reach 42 after 8 overs.

Utseya changed both bowlers, and Gary Brent found Morgan’s edge; this time Chigumbura did not grass the chance. Four balls later Chigumbura himself had Niall O’Brien caught-behind. Though Bray opened up again with a four and a six, Andre Botha left one from Chigumbura; the ball moved off the pitch and hit off-stump. Shortly afterwards Rainsford came back to have Kevin O’Brien caught-behind. The score read 89 for 5 after 22 overs.

The situation called for a steady partnership, and Andrew White provided Bray with that. Bray hit Chigumbura to third man to bring up his fifty, and square-drove for four 3 balls later. Utseya bowled a tight spell, but by the time White fell, the pair had added a crucial 56.

Trent Johnston walked out. There was a rain interruption, following which Utseya finished his quota of 10-0-29-0. The batsmen exploded against Mpofu, but Johnston was run out just as things looked good for Ireland. The tail hung around Bray, who reached his hundred with a boundary past third man: it was the first World Cup hundred by an Ireland batsman.

Ireland eventually finished with a competent 221 for nine. Bray, opening batting, had played through the full fifty overs, remaining unbeaten on a 137-ball 115 with 10 fours and 2 sixes. Mpofu, Chigumbura, and Brent picked up two wickets apiece to go with Utseya’s fantastic spell.

Terry Duffin started off in style, punishing Dave Langford-Smith’s second ball for four. The tall, fast Boyd Rankin shared the new ball, only to be clobbered by Duffin through cover. With Sibanda also joining in the fun, Zimbabwe raced to 26 without loss after 5 overs.

Duffin was dropped twice in the next over — by Niall O’Brien behind the stumps and by Morgan at second slip. The last ball, however, grazed Duffin’s bat and thudded into Niall’s gloves. Sibanda took up the challenge with 3 fours off Rankin’s next over, and reached his fifty in 61 balls with 8 fours.

Then Chamu Chibhabha holed out to Langford-Smith at mid-off off Johnston. Sean Williams tried to clear mid-on off Kyle McCallan, only to find the 6’7” Rankin. Matsikenyeri announced himself with 2 fours and a six, and with 94 to score off 22 overs with 7 wickets in hand, it seemed Zimbabwe would cruise to victory.

Then Sibanda played White off the backfoot (and played it well), but trod on his stumps and was given out hit wicket for an 84-ball 67. Chigumbura was caught brilliantly by a diving Bray at mid-on, and with a mere 24 to score from 42 balls, there was no doubt that Zimbabwe would seal the match.

Taylor gave the strike to Matsikenyeri, who had earlier reached his fifty off fifty balls. He hit McCallan past the bowler for four, and went for an encore; McCallan got his fingers down in time, and Taylor was found outside the crease. Not to be bogged down, Matsikenyeri thumped the last ball past fine-leg for four more.

15 from 6 overs. Johnston replaced Kevin O’Brien. Brent blocked two balls, and survived a leg-before appeal off the third; he blocked the fourth and went after (and missed) the fifth; they scampered for a single off the last ball, and somehow reached the other end.

14 from 5 overs. This time Brent managed a single off the first ball, but all Zimbabwe could manage from the rest of the over was another single. There were swings and misses, but the over went eventless.

12 from 4 overs. Matsikenyeri played Johnston’s third ball to Kevin O’Brien at mid-wicket and ran frantically. O’Brien mis-fielded, which allowed Matsikenyeri to get away. Brent managed another single, but all in all it was another eventless over.

10 from 3 overs. Johnston packed the 30-yard circle with more and more fielders. Botha bowled two dot balls, pushing Brent back on the crease, before trapping him leg-before with an excellent slower delivery. Utseya managed a single off an inside edge, and that was that.

9 from 2 overs. Johnston, having bowled out, brought Kevin O’Brien back. Utseya hit the first ball straight to Morgan at cover. All Mpofu had to do was to give Matsikenyeri the strike, but he could not score off four dot balls. He hit the last ball to Johnston at mid-on and (somewhat foolishly) set off for one; Matsikenyeri declined quite rightfully, and Mpofu was run out.

The final over madness

Kevin O’Brien’s wicket-maiden meant Zimbabwe had scored a mere 15 from 6 overs, losing 4 wickets in the process — but they had Matsikenyeri on strike. Johnston entrusted White with the final over. Matsikenyeri cover-drove the first ball; long-off covered a lot of ground to restrict it to two.

7 from 5 balls. White bowled short; Matsikenyeri cracked him past point; once again there was a chase; and Matsikenyeri ran two more.

5 from 4 balls. Matsikenyeri played to mid-wicket, and this time he responded to Rainsford’s call. They ran a single.

4 from 3 balls. Rainsford heaved blindly, and the ball ran past cover. Once again they managed a single.

3 from 2 balls. Matsikenyeri waited and cut past point. The fielder flew across to take the catch, could not reach it, recovered, chased it down, slid perfectly, picked the ball and threw it back. They took on his arms, and got back just in time for the second to avoid being run out.

1 ball, 1 run, 1 wicket. Matsikenyeri swung and missed amidst all the pandemonium; Niall O’Brien gathered cleanly and whipped the bails off; Rainsford tore down, but O’Brien threw the ball to White, who whipped the bails off. The teams played out the third tie in the history of World Cup.

– Ireland upset Pakistan in their next match (on St Patrick’s Day) to reach the Super Eights, where they beat Bangladesh. They also beat England in World Cup 2011.

– Zimbabwe ended the tournament without a win.

– Bray’s innings remains the highest for an Ireland batsman in a World Cup.

– Eoin Morgan later played for — and then captained — England.

– There has been only one more tie in the World Cup. Below is the complete list.

Man of the match: Jeremy Bray. 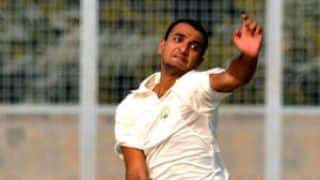