Malinga's late burst caused the Proteas to nearly choke after cruising for the most part.

March 28, 2007. It seemed one of those regulation, one-sided matches which the side batting second wins at a canter. And then suddenly it changed into a furore of flying bails and departing batsmen. Arunabha Sengupta looks back at the day when Lasith Malinga captured four in four at Providence.

It seemed as one-sided, run-of-the-mill and regulation as a limited over match can be.

The newly constructed Providence Stadium, a ten minute drive from Guyanese capital Georgetown, looked like a furnace and felt like one. The concrete was humming with heat, and there were flashes of freshly installed steel from unexpected corners. It had taken plenty of funds, loaned in bushels from India, to set this up. And as the match was played out, sans the drama that could distract one from the heat of the day and the austerity of the premises, one reflected with plenty of nostalgia and not a little irritation on dear old Bourda that would never see another international match.

Sri Lanka had stuttered, stumbled, recovered and then capitulated in their innings. The discipline and quality of South African bowling had reduced them to 98 for 5. Tillakaratne Dilshan and Russel Arnold had rallied, scripting fighting half-centuries, taking them to 195 in the 46th over. And then wickets had tumbled, the last four for one solitary run. Charl Langeveldt, prison warden turned fast bowler, had captured 5.

In the end, 210 had seemed a puny target. There had been few concerns even when Chaminda Vaas had swung the ball in and AB de Villiers had played outside the line to have his middle stump pegged back for a duck.  There was substance, experience and class at the top of the order.

Graeme Smith and Jacques Kallis had made it all but secure. Muttiah Muralitharan had been able to deceive Smith in the air, but by then the total read 95, in just the 18th over. And when the master tweaker had induced Herschelle Gibbs into hitting one back to him, the score had reached 160 and the scoring rate was 5 an over. At the other end Kallis had seemed impregnable at 63.

Just 50 to get, and the fall of the third wicket had brought in Mark Boucher, promoted in the order for a few lusty hits. Mahela Jayawardene had stationed himself at the slip, and brought in a silly-point. Wickets were the key. And Murali had responded, turning the first ball viciously and catching Boucher on the crease. Two had fallen in two and the sweating crowd had at last got the whiff of some excitement.

But it had seemed a minor bump. Kallis had been steady and placid, and Justin Kemp a fine second fiddle. Murali had fast run out of overs.

Malinga had been unimpressive and expensive. The score had stood at 182 in just the 38th over. Less than 30 had remained when Kemp had pushed Jayasuriya inside the line and Kumar Sangakkara had whipped off the bails.

And off the very next ball, Malinga had put paid to whatever chances had remained of breathing some late excitement into the game. Kallis had driven him straight back and he had failed to hold on.

As Shaun Pollock and Kallis had knocked off the remaining runs, the spectators had mopped their brows and waited for the contest to get over quick. Murali and Jayasuriya had ended their spells. Pollock had lofted Vaas over cover for three to bring up the 200, and flicked a rank bad Malinga delivery off his pads for four.

Now, as Malinga sent down another widish delivery, Pollock threw his bat at it, got it down to third-man and ran two. The yorkers were just not landing today. Four runs to score off 32 balls, 5 wickets in hand. And one-day cricket was supposed to thrive on excitement.

In the stifling press-box, journalists tapped out their final reports with haste, eager to get out of there, willing Pollock to end it quickly off this man who had figures of 7.4-0-49-0.

In ran Malinga, his curious golden streaks flaming amongst his long curly locks. The ball was delivered with his usual slinging action, the right arm going through that incredible round arc that had gone out of fashion in the early 1900s. The ball came out slower than expected, Pollock played outside the line, and the middle stump went for a skip and a tumble.

Some exhibition of excellence late in the match; amusing, but hardly much more. These South Africans always bat unnervingly deep. Andrew Hall entered at No. 8, a man who had scored 163 as a Test opener in India.

Malinga, the leonine mane flopping as if with a life of its own, tore in and attempted another yorker. It   dipped like a spear at Hall’s toe. The newcomer dug it out, scooped it rather, and it sailed in a comfortable arc and landed in the hands of Upul Tharanga at cover. 206 for 7. Malinga on hat-trick. End of the over.

The last two balls had sparked ripples of excitement around the ground. Could Malinga complete the hat-trick? Would he at all get the chance? After all just four runs remained to be scored and Kallis was facing Vaas, batting on a patient 85. He could finish the match in this over, could he not?

The great all-rounder pushed the first ball through cover for a single. Three to win off 29 balls, 3 wickets in hand. Vaas ran in to Robin Peterson, another excellent man with the bat lower down the Protean order. Five balls followed, one after the other, fast, accurate, three going straight on, two suddenly swinging in. Twice Peterson was struck on the pad, twice the Sri Lankans went up, one a loud chorus, the other a muted one. Twice the umpire remained unmoved. The bat came into play three times, more in desperate defence than as an instrument for scoring runs. Five dots were registered. The Sri Lankans had somehow got the whiff of a chance, and Vaas was not prepared to give anything away.

Four overs remained. Two to be bowled by Malinga. The paceman was straining at the leash, itching to have another go, who wouldn’t when on a hat-trick? The ball went with the slant of the bowling arm. Rocketing across. Kallis drove hard, aiming square on the off side. The ball went fine, too fine. Sangakkara went on his knees and pouched it low. Malinga exploded, and Kallis waited. The Lankans did not think there was a doubt.

The celebrations were interrupted to emit an appeal of ear splitting earnestness. Daryl Harper’s finger went up. Malinga had his hat-trick, he was leaping up and down, almost out of his skin in sheer delight. What was more, Sri Lanka had been presented a miraculous chance of winning it.

Makhaya Ntini was the new man. Malinga sprinted in. The ball pitched perfectly, in the block-hole, Ntini’s bat did not get down in time, and the stumps were pegged back. Four out of four. Malinga was sprinting around the field, the rest of the Sri Lankans chasing him around. The crowd alive with buzz and music. In some schools of thought that amounted to two hat-tricks. One South African wicket remained. A miracle was being scripted.

In walked Charl Langeveldt. The hero for the South Africans with the ball. And now he was in to ensure that all his good work did not come to nought.

Malinga screamed in, bowling in a different zone. The ball went like a white streak, pitching perfectly at the yorker length. Langeveldt’s bat was late, played over the ball. Eyes strained to see the knocked stump and the flying bails, ears pricked up to hear the death rattle. It did not come.

The stump was shaved, but not touched. South Africa survived by a hair’s breadth.

The bowler turned, eyes burning, and hastened in. The ball was again full and straight. This time Langeveldt’s bat came down on it and it was played to mid-off. Two balls remained in this over.

Malinga turned, the fielders crept in from the in-field. The ball was full, angling in. The bat came down, squirted it to square leg. And Jayasuriya mis-fielded. The batsmen scampered a run.

Peterson faced now, and in ran Malinga. The ball speared through again, and swung away. The bat pushed at it and missed. Sangakkara collected behind the stumps. The great over had come to an end. Two to win. Three overs to go. One wicket left.

Vaas had the ball now, coming in for his last over. Two slips were placed, the rest of the field waited inside the circle. A lone man stood at fine leg. Vaas bowled them on the off stump line. Langeveldt pushed at two and missed. He let one go. And managed to keep three out, two of them canny off cutters. Six times the crowd sat on the edge of their seats, the intolerable heat forgotten, gleaming sweat unmopped. Six times there was collective groan and synchronised sigh. Langeveldt survived. Vaas did not give away a run. The most dramatic of maiden overs.

And now Malinga had the ball again, for a final fling. A slip stood in place as Peterson faced. The batsman decided to be brave, banking on the partiality fortune is supposed to bestow on the ones that were gallant.

The first ball was full, tailing away. Peterson threw his bat at it. There was a great swish, a great sigh, a thousand groans, loudly beating hearts, but no contact. Sangakkara relayed the ball back to the fire-breathing bowler.

And in ran Malinga again. Once again the ball tailed away, and once again Peterson’s bat swung. It connected in a thin edge and ran away past the slip, fine, all the way for four. Peterson was ecstatic, jumping for joy. Langeveldt had a wide smile and upraised arms. He had kept out nine balls, to go with his five wickets. Which was more satisfying? He did not know. The former prison warden had got his team out of jail.

South Africa had squeezed through by virtue of an outside edge. Chance had had its final say. The last 22 balls had seen some of the most extraordinary cricket in the history of the World Cup.

It was a match with a twist in the tail, that stung and stung hard. 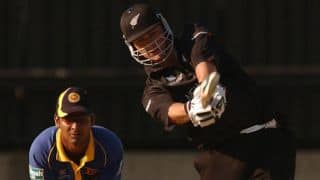