Australia reach the end of a historical cycle that flagged off in the mid-nineties.

One of the reasons why the 2011 World Cup promised to the most open and competitive for years was because Australia entered the tournament on shaky ground. The four-time titlists and defending champions were ranked the No. 1 ODI team and were coming to the subcontinent after a 6-1 thrashing of a beleaguered England at home, but the signs were evident. This wasn’t a champion side, and opposing teams were not about to be overawed.

And now, after Thursday’s quarter-final in Ahmedabad, we will have for the first time since 1996 a new World Cup champion. It is the end of an era in more ways than one.

Past Australian sides – most famously the one which ruled the last decade – intimidated opponents even before a match started. You could sense players on the other side look over at the Australian nets and see swaggering figures such as Matthew Hayden and Andrew Symonds, or a scowling Glenn McGrath marking his run-up, and wonder, ‘jeez, how are we supposed to compete with them?’

But this current Australian side didn’t intimidate anyone. The cracks were all too evident. There were no frightening characters, no hulking openers or all-rounders to threaten. Australia’s aura of invincibility had long been discarded.

Most pertinently, Australia’s bowling had been exposed several times over the past season. In a Test match in Mohali last year, they failed to take the last two Indian wickets as the home side hung on for an epic win.

In the first match of a three-ODI series after that, Australia failed to defend 289.

In an ODI at the MCG in November, their bowlers looked on as Angelo Mathews and Lasith Malinga revived Sri Lanka from 107 for eight chasing 240, and in the process rewrote a ninth-wicket partnership record that had stood since the 1983 World Cup.

The lack of quality coming through the ranks back home has been worrisome for a while now. The selection of Brett Lee and Shaun Tait as the team’s pace spearheads was as risky as drunk driving, and even if they had bowled the team to a fifth World Cup, it would have been as representative of the state of Australian cricket as Dallas would be life in the American south.

Inevitably, Ricky Ponting’s fate has become synonymous with this team’s fate. Until the quarter-final in Ahmedabad, it appeared as if luck had deserted him. He had been roiled by a run-out and took it out on an LCD TV screen and he had shouted at a team-mate after colliding for a catch. He had cribbed about referrals and fumed after steering a catch into Kamran Akmal’s gloves. Whether he was more peeved about being dismissed or that Akmal had caught the ball remains a mystery, but it was evident that much was wrong with the man.

Then came Ahmedabad. And with the hour, the man. Ponting’s 30th ODI century was testament to his sense of occasion. The man derided by many answered his critics with a fine innings. But Australia lost the match and, for the first time since 1992, failed to reach the semi-finals of a World Cup.

Where does Ponting go from here?

He is a bullish individual, and a legend of the modern game. Many in Australia have called for his retirement, but Ponting isn’t one to do anything on anyone else’s terms. His century against India proved that there is gas in the tank, but how much? His captaincy has been questionable, but the current administration has done plenty to suggest its incapacity to make a necessary change.

Ponting has nothing left to prove to anyone; 13,288 ODI runs, three World Cup titles. There are bigger legends of the game who haven’t even won the World Cup once. He is certain not to play another World Cup, and the general consensus is that Ponting would be better off focusing on Test cricket. Perhaps a move down the order waits.

There are others whose immediate futures will be closely monitored. Brett Lee hung on for this one last chance to compete in a World Cup, and he was thrilling to watch. There was no trace of the injuries that have dogged Lee, as he tore in all tournament, bowling with pace and fielding like a tiger on the boundary. He was frightening to watch against Pakistan, when he defended a low total with the ferocity of a much younger player. The lasting images of Lee the champion fast bowler, for this writer, were of him taking a smart return catch to dismiss Mohammad Hafeez and his return to the field against India minutes after sustaining a nasty cut to the right temple. Lee had come to symbolize all that was aggressive and competitive about Australian cricket, and the void he leaves will be massive.

The Ashes exposed how inadequate Australia’s current administration is in dealing with failure. That a panel or former captains Allan Border, Mark Taylor and Steve Waugh had to be formed to look into why Australia lost the Ashes highlights the complete faintness of Andrew Hilditch’s selection panel.

Now, after the World Cup exit, the selectors will be forced to make tough calls. There is no hiding now. 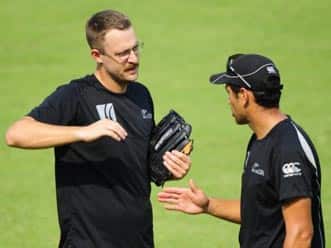