Beating South Africa 2-1 in a T20I series, Australia have again showed they have a knack of raising their performance bar ahead of critical events, which is one of the aspects that make them the best side in the history of cricket.

Can Australia ever be written off from a major tournament? They have a knack of raising their performance bar ahead of critical events, which is one of the aspects that make them the best side in the history of cricket. In backdrop of ordinary results in Twenty 20 Internationals (T20Is), a lot has been discussed on Cricket Australia (CA) neglecting the shortest format. However, on the brink of ICC World T20 2016, Australia defeated a spirited South African side 2-1, at the latter’s home, to announce themselves as one of the favourites in the tournament. READ: ICC World T20 2016, South Africa overview: Perennial favourites will look to banish the ‘chokers’ tag

Australia have their own dismal shows to blame for their reputation of being underachievers in T20Is. In international cricket’s almost 140-year history, T20Is have been the format Australia have struggled in. It is surprising for a side that has dominated Test rankings and have won 5 out of 11 One-Day World Cups, to not excel in World T20. True, CA does not put as much emphasis on T20 as other two formats, but there are indications that things are moving towards a better direction. This edition could be their defining moment.

Most of Australia’s top players play in BBL and IPL, not just filling up slots but as key players. The rise of Steve Smith has been phenomenal. In 2010, when Australia ended the tournament as runners-up, a 20-year-old Smith played as a leg-spinner all-rounder. In the previous edition in Bangladesh, he could not break into the XI. Now, he leads the side as one of the best batsmen in world cricket.

Australia are a top-heavy side. There is Shane Watson, one of the best exponents of the limited-overs format. In the third T20I Australia played India earlier this year, Watson, leading the side, scored a century. Though Australia lost the game, Watson once again displayed the damage he can inflict. Watson has been among the most successful IPL players, and his immense T20 experience in India will benefit Australia. Along with Watson, there is No. 1 T20I batsman Aaron Finch at the top. One should not forget Usman Khawaja, who has been exceptional this summer Down Under. With Smith at No. 3, followed by David Warner, Glenn Maxwell and Mitchell Marsh, Australia’s batting looks well set. In fact, when they succumbed to a 0-3 whitewash to India, it was their middle-order that did not fire and the decision to push a quality opener like Warner to No. 4 has proved to be a masterstroke. READ MORE: David Warner’s shift to middle-order further boosts Australia’s batting ahead of ICC World T20 2016

Most of their batsmen are key to their respective IPL sides. Though countering the spin threat in India may not be a cakewalk but they surely have the skills to tackle it.

The weakness, however, lies in their inexperienced bowling attack, which lacks sting in absence of Mitchell Starc. The onus is on Josh Hazlewood and James Faulkner to lead the mantle, but in Nathan Coulter-Nile, John Hastings, Adam Zampa and Andrew Tye, they surely have skills at disposal. Even from bowling front, much will depend on Watson’s experience.

Australia may be ODI world champions and the keeper of ICC Test mace, but their illustrious trophy cabinet does not look complete sans ICC World T20 Trophy. They won their first World Cup at Eden Gardens, Kolkata; who knows, whether history will repeat itself, and they will end up lifting their maiden World T20 title at the same venue? 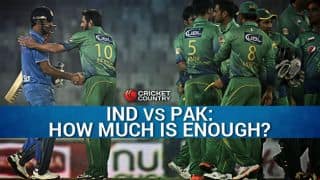 Dear Pakistan, when can we talk cricket?