Sri Lanka went into the T20 World Cup 2016 as defending champions, but managed to win just one match in this edition.

Despite being defending champions, Sri Lanka were not expected to take ICC World T20 2016 by storm. In the end they bowed out of the tournament with a solitary win, against Afghanistan. They are going through a transition since the twin retirements of Kumar Sangakkara and Mahela Jayawardene; the fact that both Tillakaratne Dilshan and Rangana Herath, the last of the older band, are on their way out, is not good news. A bigger blow came when Lasith Malinga, the man who had led them to the title two years back, stood down from captaincy before the tournament, and did not play a single match. READ: T20 World Cup 2016: Angelo Mathews pleads for patience from Sri Lanka cricket fans

But Sri Lanka had their moments. Though the result may not show it, they pushed West Indies, making them earn their victory. Mathews led a gallant, if valiant, charge against England. And the spinners, like their counterparts from most teams, were impressive, if not excellent.

Unfortunately, despite the odd flash of individual brilliant, they did not get going as a team. Here, then, are marks out of 10 for the Sri Lankans.

Sri Lanka’s find of the tournament, without a doubt, despite missing out on the Afghanistan match. Drafted in as replacement for Malinga, Vandersay was thrown to the lions against West Indies. Defending 123, Vandersay took out Johnson Charles, and finished with astonishing figures of 4-1-11-1. He held his nerve when England slammed 171, dismissing the two big fish — Jason Roy and Joe Root — and finished with his head high when South Africa obliterated them.

Vandersay came into the tournament with career figures of 12-0-115-1. His returned from India with 12-1-62-3 and an experience that will help him scale new heights in future.

Mathews came into the tournament following a poor show in Asia Cup, but came good at the big stage. He played crucial cameos against Afghanistan and West Indies, but the best effort came against England. Chasing 172 Sri Lanka were reeling at 15 for 4 in 3 overs before Mathews launched a furious onslaught, scoring 73 not out from 54 balls and taking Sri Lanka within 10 runs of England’s total. READ: Angelo Mathews: The only shining star amidst gloom surrounding Sri Lankan cricket

Gets an extra point for dismissing the always-dangerous Mohammad Shehzad, and another half -point for doing his best to bring an out-of-sorts team together.

He may be 39, but Dilshan still has it in him to turn around matches. Sri Lanka might not have beaten Afghanistan without his unbeaten 56-ball 83, and his patient 36 helped Sri Lanka resurge after a poor start against South Africa. Additionally, he got a terrible decision against West Indies after it seemed he set off again. Surprisingly, he did not get a bowl.

Vandersay was not even ten when Herath first played international cricket. While the leg-spinner was Sri Lanka’s star of the tournament, Herath showed his class once again, finishing with an excellent 16-1-99-3.

Herath was amazingly consistent, conceding between 21 and 27 from his 4-over quotas in all four matches he played in. He stood firm in all four outings, even against South Africa and England.

As long as Herath will be around, Sri Lanka will find a fulcrum to revolve their bowlers around, but for how long?

Barring the Englishmen, nobody really got Chameera away. Fast and accurate, he brought a different dimension to the Sri Lankan attack. His economy rate was a mere 6.36, but loses a point for going wicketless throughout the tournament.

A blinder against West Indies and a cameo against England, both under pressure, sum up Thisara’s tournament with bat. His strike rate of 145 was the best among Sri Lankans. He bowled well against Afghanistan, taking three wickets, but did little else of note with ball in the tournament.

Played two matches, batted at eight, and did the most out of his opportunities: he scored 35 at a strike rate of 130, and got out only once. Bowled without any impact. Sri Lanka may benefit by pushing him up the order.

An ordinary tournament from the immensely talented Chandimal. He reached double-figures thrice but never went past 21, though he often helped Dilshan get off to those good starts. Was safe behind stumps. READ: Arjuna Ranatunga slams Sri Lanka Cricket administration

Was used surprisingly sparingly throughout the tournament, despite taking two crucial wickets against West Indies. Got a single over in each of the other three matches. Played a cameo against South Africa.

Played one match. Went for runs. Got Faf du Plessis LBW when there was a clear inside edge, but the wicket will remain against his name.

Scored 30 against England, and 20 from the other three matches combined.

With his experience, Kulasekara was expected to lead the Sri Lankan attack. He was hit all over in the two matches he played, and had to be replaced midway through the tournament. His fielding was also terrible, and that is an understatement. It is perhaps time for another limited-overs stalwart to bow out before being axed for good.

Played two matches. Batted once. Scored a run. Bowled a forgettable over. 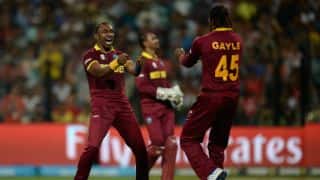