While, the sub-continent teams are preparing by playing each other in the ongoing Asia Cup 2016, Australia will test their mettle against a formidable South Africa in a three-match series.

As the ICC World T20 2016 gets closer, all teams are getting busy preparing for the biggest tournament of the year. While, the sub-continent teams are preparing by playing each other in the ongoing Asia Cup 2016, Australia will test their mettle against a formidable South Africa in a three-match series. While South Africa and Australia will take their upcoming three-match affair as a preparatory step for the ICC World T20 2016, the timing as well as location of the series is very questionable. Both the squads have few injury scares and it would be very daft to risk the likes of Dale Steyn and Aaron Finch, who are on recovery trail. FULL CRICKET SCORECARD: South Africa vs Australia, 1st T20I at Durban

As it was well known in advance, the ICC World T20 2016 is scheduled to take place in India Slow and flat, the Indian pitches are tailor made for spinners. If a team has a good line-up of spinners, the chances of winning increase greatly for any team. Keeping all these facts in mind, the idea of Australia playing South Africa in pace-friendly and bouncy wickets could be a big blunder.

To start with, pitches in South Africa are poles apart from those of India. The South African pitches offer a huge amount of assistance to the pace bowlers. If a bowler bowls at 140+ kmph and on perfect length, he is sure to get assistance from the pitch. Secondly, the pitches have almost no assistance for spinners. Bowling spin on such pitches could be asking for trouble most of the times.

This series is also termed as series of ‘Pace vs Pace’. Both the teams have arguably the best pace line-up in international cricket, yet their quality of spin is very ordinary. Nathan Lyon has shown huge promise in Test cricket, but has not been successful in limited-overs cricket. He made his T20I debut very recently, against India in the three-match series at home in January. South Africa, on other hand have Imran Tahir, who can exceptionally good one day, but horribly bad on others. He has the knack of picking wickets, but concedes loads of runs. Both team’s spinners could prove fruitless in the South African pacey pitches. Hence, it will not be wrong to say the timing of the series between South Africa and Australia is horribly wrong.

And finally, both the teams have always struggled against quality spin oppositions. Even though both teams have the best batsmen in business in AB de Villiers, Steven Smith, David Warner, Faf du Plessis. But all of them have shown their susceptibility to spin in recent times.

Regardless of the quality of opposition both teams are facing, this series will have no help in their preparation for the upcoming ICC World T20 2016. They will have some time in hand to acclimatise after reaching India, but we will have to wait and watch if there are no injuries or players running out of form. 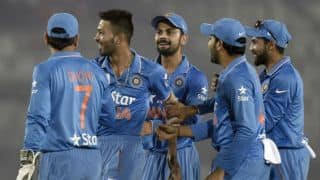