The rest of the seven Full Members of the ICC must thwart the idea in the next meeting.

If one were to speak extempore on what transpired in Indian cricket since the start of 2013, it’s likely that the eleven players who donned the national flannels will be mentioned rather fleetingly. What ensued behind closed doors of the boardroom will put forth points that could constitute a major chunk of the speech. When administrators hog the spotlight reserved specifically for the players, something’s certainly not right with the sport. The Board of Control for Cricket in India (BCCI), like most organisations in public eye, has seldom been in the news for right reasons, but the last one year has given even its staunchest supporters (if any) reasons to be flummoxed.

In the May of 2013, an opportunity arose in the midst of the sixth edition of Indian Premier League (IPL), when a handful of cricketers with grubby palms were trapped and named, albeit not by the powers that be. It was hinted that a couple of franchise owners were involved, too, in manoeuvres that were in direct contradiction with the laws. Yet, instead of using the green in their coffers to weed out such elements from the very root, a brief commotion was supressed by other frivolous affairs in the scheme of things, such as sponsors, contracts and, later, settling petty scores with other boards.

Despite the glaring manipulations and several tweaks of rules that’s already had a few repercussions — notably the IPL no longer presenting a level playing field — the protagonist behind it all continues to hold fort. The ‘conflict of interest’ case against Narayanaswami Srinivasan — a topic that headlined several newspapers in India a few months ago — is still pending in the court. The matter has now drifted into obscurity and, as hoped by Srinivasan, the media and public have moved on to other “important issues”, ranging from Indian economy to politics. The BCCI, meanwhile, has gone back to devising ways of bolstering its treasury.

This brings us to the suggestions pertaining to the overhaul of the International Cricket Council (ICC), drafted by the ‘Big Three’ — the BCCI, Cricket Australia (CA) and England and Wales Cricket Board (ECB) — much to the “surprise” of other boards. To summarise, the “position paper” states that a new executive committee (ExCo) be formed, consisting of only the BCCI, CA and ECB. The Future Tours Programme (FTP), it’s recommended, could be dissolved to bilateral agreements. And, promotion and relegation in Test cricket, with exceptions made in the cases of the Big Three, be employed. Importantly, proposed is a new finance model of ICC revenue distribution, too, amongst many others.

Two things can be unanimously agreed upon: the ICC is long due for an overhaul, and the ones depositing more, monetarily, deserve to withdraw more. It’d be apt if their word is given extra weightage, too, during decision-making. What’s contentious is the fact that the 21-page “position paper”, while stating its intent to protect the sanctity of sport, reeks of domination in every area. On the field, it grants immunity to India, Australia and England, regardless of their performance. In this case, a two-tier system in Tests would be illogical. Off it, if the changes are implemented, the proposal is certain to hit a few boards hard — Cricket South Africa (CSA) could generate less revenue than even the Pakistan Cricket Board (PCB).

In the last few years, the BCCI has, no doubt, ruffled a few feathers. They weren’t on the same page with the ECB either. Recent proceedings, however, bring to fore the fact that had the ECB and CA been in the BCCI’s shoes, their priority, too, would have been to look after the coffers. Past becomes irrelevant. Perhaps other boards too would have acted similarly, if entrusted with power and if engulfed by a solid viewer-base. Had CA and ECB refused to play along, the BCCI would have been up against nine other boards — the Full Members. Even if the BCCI had then put its participation in all ICC events, or even bilateral fixtures, on the line, it would have eventually resulted in a loss for them. Surely, the BCCI can’t just bank on the IPL and hope to conduct a domestic tournament alone, like the National Football League (NFL) in USA, and expect to consistently make profits off it. International matches are a must for sustenance of a sport such as cricket.

It’s at this juncture the rest of the seven boards need to make their stand known, if development of the sport is at the heart of their interests. Except CSA, most of the other boards have chosen a diplomatic stance, despite the impending calamity. “The critical thing is to identify the things most important to us. That means ensuring the stability of our playing programme and revenue generation,” said New Zealand Cricket’s (NZC’s) director Martin Snedden, before adding, “Don’t jump to the conclusion what they’re doing is not good for world cricket.”

Some prefer to wait and watch, despite the apparent disadvantage, perhaps owing to the fear of being shut off from the fraternity. “I have to find countries who are in our position, read through the proposals and then think what to do,” Nazmul Hassan, president of the Bangladesh Cricket Board (BCB) said. Sri Lankan cricket authorities want the discussion on the draft to be postponed.

An evident fact, as stated by ICC’s vice-president Mustafa Kamal, is that the draft needs extraordinary majority to be passed; it needs the approval of the other board members. Instead of whining later, it’d augur well if the rest of the seven Full Members thwart this idea in the next meeting [scheduled for January 29] and prevent cricket from reverting to the days of ‘veto power’. Of course, standing up to the might of the BCCI could lead to a few immediate ramifications, but there are little chances of being stamped on forever, especially with majority on your side. Now is an apt time to defy, for if no fight is put up, this topic, like the rest, could be another storm before the calm. 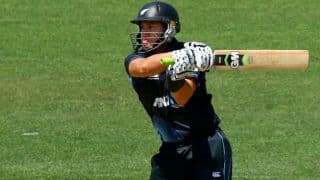 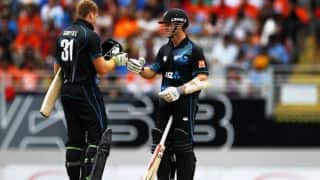