Lalit Modi was banned for life by the Board of Control for Cricket in India (BCCI) on Wednesday. Three years after he was suspended on allegations of financial wrong-doings, the BCCI made its final decision. Nishad Pai Vaidya draws parallels with Jagmohan Dalmiya's tale. 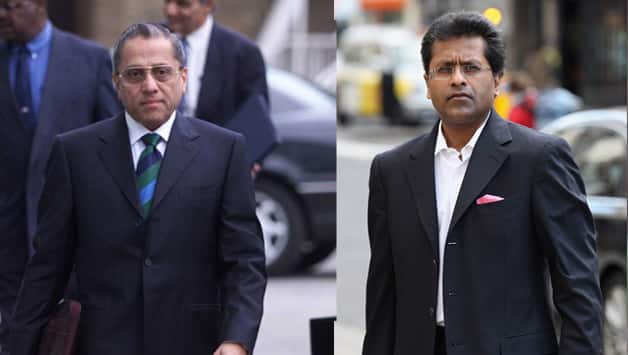 In Indian cricket, you can always come back if you have the right friends at the helm. Jagmohan Dalmiya (left) did it, and one shouldn’t be surprised if Lalit Modi does so too in the future © Getty Images and AFP

Lalit Modi was banned for life by the Board of Control for Cricket in India (BCCI) on Wednesday. Three years after he was suspended on allegations of financial wrong-doings, the BCCI made its final decision. Nishad Pai Vaidya draws parallels with Jagmohan Dalmiya’s tale.
When the Board of Control for Cricket in India (BCCI) sets its mind on something, they make sure it materialises come what may. N Srinivasan’s very refusal to quit as the president of the board even after he was at the centre of the Indian Premier League (IPL) spot-fixing storm is symbolic of the BCCI’s unshakable attitude in certain situations. So, when reports suggested that they were considering a life ban on their bête noire Lalit Modi, it was but obvious that they would go ahead and get the small hurdle out of their way in the form of an appeal in the Supreme Court. But, what does this decision mean for the architect of the IPL? Does he have any hope of making a comeback to Indian cricket?

Modi has been in London on a self-imposed exile post the IPL 2010. It was then that the BCCI suspended him as there were allegations of some “individual wrong-doings” on his part and they were majorly financial. Modi flew to London as he claimed that his life was in danger in his home country. For over three years, he has stayed away from India and has run his campaign from the safehouse — the anti-Srinivasan crusade in particular. So, he has been effectively away from the battle-ground and has only shot his “arrows” from a distance — not enough to dent the might of the BCCI.

While one traces Modi’s journey at the BCCI, one cannot help but draw parallels with Jagmohan Dalmiya. Modi brought in money and made Indian cricket a lucrative force. His shrewd business mind helped the board seal numerous deals and capitalised on India’s booming economy post the 1991 liberalisation. On the other hand, Dalmiya gave Indian cricket a voice on the world stage and his ability to deal with the toughest of situations made the board a powerful force. But, not everything is a smooth ride. There have to be bumps along the way. Otherwise, it just isn’t life.

Dalmiya found himself in hot water when there were allegations of some misappropriation of funds during the 1996 World Cup. And, he was banned by the BCCI Special General Meeting (SGM) in 2006 on that count. But, as we know, he made his way back after a victorious legal battle against the BCCI. He set off on his second innings, first working in near oblivion at the Cricket Association of Bengal (CAB) and then surging his way ahead when the Srinivasan saga came to the fore early this year. Can we expect the same from Modi?

What we learn from the Dalmiya story is that a “life ban” isn’t to be taken in its literal sense in Indian cricket. There would be legal avenues open to Modi and it is most likely that he would challenge it. If he gets past that, he needs the right people in place at the BCCI. In Indian cricket, you can always come back if you have the right friends at the helm. There are no permanent friends or enemies in politics they say. The same is true for Indian cricket.

Modi’s life may be under threat, but staying away from India isn’t helping his cause in Indian cricket. He may claim that he wouldn’t allow Srinivasan to destroy Indian cricket. How can he do that living miles away? For him to return, he has to re-enter the battle-ground.