When it comes to presenting the Union Budget, form is as important as substance. Even a lacklustre, dull budget, if presented with an amount of style and flourish, can go a long way in reviving the animal spirits, kick-starting the investment cycle, boosting productivity…er…you get the drift, we suppose. 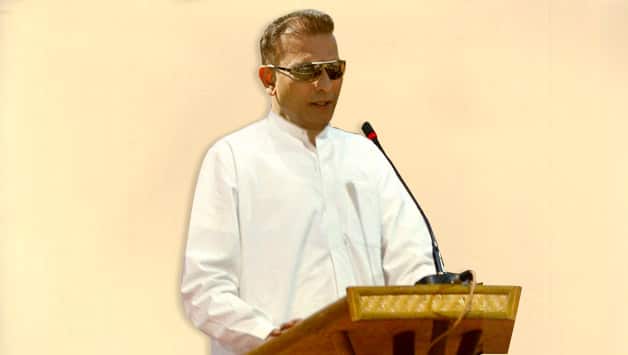 When it comes to presenting the Union Budget, form is as important as substance. Even a lacklustre, dull budget, if presented with an amount of style and flourish, can go a long way in reviving the animal spirits, kick-starting the investment cycle, boosting productivity…er…you get the drift, we suppose.

So in that spirit, we got an eclectic bunch of celebrities, Ravi Shastri, SM Krishna, Salman Khan, showmen par excellence, to re-present the Union Budget, in their signature styles on the floor of the House. Here are transcripts:

Ravi: Let me start by thanking the President of Congress, Sonia Gandhi, and Manmohan for giving me this chance to present the Union Budget. The atmosphere is electric, the noise is deafening, and the crowd is on their feet. Hoping to see a cracker of a budget!

Ravi: Let me start off with a boundary ladies and gentlemen – the present Manmohan Singh government has taken the economy to the cleaners!

(BJP MPs thump desks, UPA MPs get up, come to the floor of the house, start shouting slogans)

Ravi: A lot of accidents these days are taking place due to over-speeding. So I propose to allocate INR 366463 Crore for installation of speed-breakers on all roads to make sure no one goes faster than a tracer-bullet ever again!

(MPs back to thumping desks)

Ravi: As for long-distance travel, things are going to look bad…

Ravi: In the air……. and your money’s TAKEN, ladies and gentlemen! I announce a 30% hike in fares for those who love to take the aerial route!

Ravi: Well, I justttt get the feeling Meira, that this budget could go all the way down to the wire!

(By now, there is total pandemonium. The MPs, still restless, call for adjournment …Rajeev Shukla asks Ravi if he can be done soon. Ravi nods. Rajeev then goes to the speaker and whispers in her ear, to adjourn the house, after Ravi’s closing speech)

Ravi: Well, ladies and gentlemen, we’ve had a remarkable day of budgeting today – over 500 policies cleared, over 34264667 Crore Rupees set aside for them, over 60 MPs acting like hooligans and in the end, it is only fair to say, that the game of budget is the winner!

(Standing ovation by all MPs, more because they’re all waiting to get the hell out of the hall)

(SM Krishna takes his time to stand up, rummages through a pile of documents and eventually pulls out a set of stapled papers. He adjusts his glasses and starts)

SM Krishna: Madam Speaker, I want to start by thanking Almighty Allah for giving me the responsibility to present the fifth budget of the elected government. This is a historic occasion. The nation should be proud of this achievement. The world can see that democracy is thriving in this country. I want to thank the Prime Minister, and more importantly, the Chief of Army Staff for making the parliament the center of political life of this nation. With that I begin:

The following are the key aspects of this budget:

Number 1. The Haj quota has been increased two fold. We have signed a bilateral agreement with the government of Saudi Arabia on January 22, under which the Hajj policy has been reviewed and set accordingly. Airfare for Hajj has been finalized at Rs. 85000 for the North region and Rs. 95000 for the South region.

(Members grumble, but no one dares say a word out in public. Samajwadi Party MPs start clapping.)

SM Krishna: (continues after applause dies down) Number 2. We announce a special package of 150k crores for Balochistan. This will give a boost to the government’s special projects in Balochistan and will result in further empowerment of the people of Balochistan.

(Asif Zardari who is watching live telecast of the budget speech from his mansion in Islamabad, suddenly begins to jump up and down shouting ‘I told the UN chaps! I told them India was interfering in Balochistan’)

SM Krishna: Number 3. It is the government’s intention to liberate Kashmir this year, in lines with the wishes of the people in the country.

SM Krishna (continues): Towards this, we announce a special package of 20,000 crores for Jamaat ud dawa led by Shri Hafiz Saeed. Inshallah, before the next budget, Kashmir will be part of Pakistan…

(At this point, SM Krishna stops abruptly, and brings the bunch of papers in his hands closer to his eyes)

SM Krishna: Er… my apologies, please ignore whatever I’ve read out so far, it seems I picked up the budget speech of the wrong country.

(Picks up another document, clears his throat, and starts again)

Good afternoon, ladies and gentlemen, I present to you, the annual budget for the financial year 2013-14. Before I begin, let me thank Mr. Anibal Cavaco Silva, the President of Portugal…

(At this point, Rajniti Prasad materializes from nowhere, grabs the sheaf of papers from SM Krishna’s hands and rips them apart, effectively putting an end to Mr. Krishna’s speech)

Salman Khan swaggers into the House, takes off his shades and pins it to the collar at the back of his neck, Dabanng style.

Salman Khan (looks askance at the speaker in his typical style): Madame speaker, pyaar se bol raha hoon, sun lo. I propose 50% reduction in taxes for all Bollywood actors grossing over 100 Crores at box office. I propose 10% surcharge on over-acting Bollywood superstars. Also, I propose 15% reduction in taxes on alcohol (At this all MPs including Vijay Mallya whistle, and thump desks heavily)

Salman Khan: Aise (shows his biceps and flexes them alternatingly much like in the ‘Dhinka Chika Dhinka Chika’ number from ‘Ready’)

(uproar in the House)

Salman Khan: Transparency?? Yeh lijiye transparency (tears his shirt off and leaps onto his desk)

(Pandemonium in the House)

(After a few seconds, people quiet down, and Salman begins to read his speech again)

(Suddenly his mobile phone rings out to the tune in ‘Wanted’. He breaks out into a jig. A couple of seconds later Sushma Swaraj also joins in. Fade out.)

(“Unreal Mama” is the pen name under which CS Krishna (left) and Karthik Laxman (right), the founding editors of The Unreal Times (www.theunrealtimes.com), write fictional news reports, dressing room conversations and other such articles marrying humour with satire. The Unreal Times is India’s favourite satire, spoof, parody and humour portal from where the above fake Facebook wall has been reproduced with permission)