Impressed with the fact that not only could Mahendra Singh Dhoni save his job as the Indian cricket team’s captain, but got a new job as the Vice-President of India Cements, students of Indian Institute of Management (IIM) in Ranhi have invited him to share some tips on job placements. Impressed with the fact that not only could Mahendra Singh Dhoni save his job as the Indian cricket team’s captain, but got a new job as the Vice-President of India Cements, students of Indian Institute of Management (IIM) in Ranhi have invited him to share some tips on job placements.

“Earlier we had thought of inviting President Pranab Mukherjee’s son Abhijit Mukherjee, who survived an interview and group discussion moderated by Arnab Goswami.

The final placements here have interviews and group discussions, so we thought Abhijit could help our students with some vital tips,” Ashutosh, placement coordinator at IIM Ranchi told Faking News.

There were also suggestions to invite former Pakistani dictator Pervez Musharraf, who has become an expert at giving interviews in the last four years.

Ashutosh revealed: “We invited Musharraf, but he said he accepted invitations only from Indian journalists. In the meantime, Dhoni was appointed Vice President of India Cements. We realised that it was better to invite him, as he could share tips on how to get a real job, than invite someone who could, at best, give interview tips.”

Earlier, IIM Ranchi had decided to brain-mapping of MS Dhoni to start a course in leadership.

“We are still awaiting a response from Dhoni on that one, but on this one (placement tips) we are waiting desperately to hear from him,” an official of IIM Ranchi said. “Leadership and all can wait. Those are long term goals. We need good placements right now, which will take the new IIMs in the same league as the old ones,” he added.

Students at IIM Ranchi, too, are hopeful that Dhoni, a local boy, will help them out in getting awesome jobs in awesome manners.

“We are really impressed that he got a job in a cement company even though he didn’t have any relevant work experience. That’s how an MBA job should come,” Bikas, a second year MBA student explained why he was eager to meet Dhoni and get some placement tips.

Unconfirmed sources suggest that IIM Ranchi has also invited Nitin Gadkari to help students with work experience. Gadkari has been asked to share tips on what not to do that could make them unqualified to go back to even their old jobs.

“They are also planning to invite Rahul Gandhi to help those students who want to get into family business,” a source claimed. 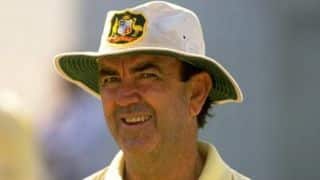