The International Cricket Council’s (ICC) Chief Executive Committee (CEC) met for two days in Dubai to take some major decisions. These included topping two DRS reviews after 80 overs in Test matches, amendment to the existing rule of using two new balls per innings in an ODI, and plucking the loophole by announcing there shall be no tactical change of captains in the middle of a series. Sarang Bhalerao takes a look at the decisions taken in the ICC meet and writes about its implications. According to the ICC, Decision Review System (DRS) referrals will be topped up to two after the end of 80 overs in an a Test innings © Getty Images

The International Cricket Council’s (ICC) Chief Executive Committee (CEC) met for two days in Dubai to take some major decisions. These included topping two DRS reviews after 80 overs in Test matches, amendment to the existing rule of using two new balls per innings in an ODI, and plucking the loophole by announcing there shall be no tactical change of captains in the middle of a series. Sarang Bhalerao takes a look at the decisions taken in the ICC meet and writes about its implications.

The International Cricket Council (ICC) announced that from October 1, 2013, a team’s Decision Review System (DRS) referrals will be topped up to two reviews after the end of 80 overs in an innings.

Now here’s a system which is contentious. Over the English summer, there were talks about making the system foolproof. The Ashes 2013 had numerous instances where questions were raised about the technology, especially the HotSpot. Usman Khawaja’s dismissal in the Manchester Test match was a classic example. On-field umpire Tony Hill declared him out but looking at the replays there was no perceptible change of the seam when the ball passed the bat. There was a sound but it was insufficient to plausibly construe that it was a woody edge. In such a case, the Snickometer would have been handy.

There were suggestions to add Snickometer while considering the decisions related to faint edges in the ICC’s Chief Executive Committee (CEC) meet. ICC in its statement said: “Noting that most of the contentious decisions relate to faint edges, the performance of the Real-Time Snickometer during the ICC Champions Trophy 2013 and the Ashes 2013, and the potential to use this technology to assist the umpires in making these decisions was discussed.”

“An independent assessment of this technology will be conducted before a decision is made on its inclusion in the list of approved DRS technologies.”

The committee considered the importance of training television umpires at the recently-concluded Elite Match Official Workshop in order to help them understand the technology.

ODI regulations — use of two new balls from the each end

This issue had the world bodies polarised. The sub-continent boards — India, Pakistan and Bangladesh were against the use of two new balls in a One-Day International (ODI) simply to help their spinners. It is tough for spinners to bowl with a relatively newish ball. Consider this: if a spinner comes into bowl in the 21st over, it is as good as he is bowling with a ball that is 10 overs old. There might be a problem of gripping the ball and extracting some purchase off the wicket. This negates their potency a little and the existing rule is against the sides that rely heavily on spin.

The rest of the boards — Australia, England, New Zealand and Zimbabwe were in favour of the existing rule. This is not rocket science, is it? South Africa and West Indies didn’t vote. So effectively, if the Board of Control for Cricket in India (BCCI) and other boards wanted a rule change they needed about two-thirds of the votes in their favour (seven from the 10 member nations).

However, for a curtailed ODI (25-overs or less) it was agreed upon that only one ball will be used. Now what if, one side has bowled 50 overs with two new balls and according to the Duckworth-Lewis method the other side has to bowl only 20 overs? Wouldn’t that be a disadvantage for the side batting second? Although on most occasions it is safe to chase in a rain-curtailed match.

The main reason for implementing the rule for using two new balls from each end was because the balls didn’t last for 50 overs. There were issues regarding its visibility, the seam would become softer and the hardness would go, thereby making it difficult for the faster bowlers to have any impact. The change of balls in the 34th over tried to bring in the balance but the ICC did away with that.

Currently the ICC has adviced CEC to look at the development of a ball that can last the full 50 overs of an innings, which won’t give any side an unfair advantage.

Cannot change the captain in the middle of a series

In the Big Bash League semi-final, Shane Warne passed over the captaincy to James Faulkner in order to avoid suspension for slow over-rate. Faulkner walked in for the toss but it was Warne who was making the tactical moves. When the authorities fined Warne, he tweeted saying that he was unaware of the law. The fact of the matter is that there were still loopholes in the system.

A similar incident occurred in 2012, when Mahela Jayawardene handed the captaincy to Kumar Sangakkara in the Super Eight match of the ICC World Twenty20 championship against England. In the press conference after the match he said: “I don’t think that the intentions were wrong. It’s a tough system and it’s tough to bowl 20 overs in one hour and 20 minutes in a tournament like this. We try our best, but the penalties are harsh. We don’t want to miss the big games, so we did it with the right intentions. Angelo Mathews was on the same offence for a match against Pakistan in Hambantota, so, if he got nailed he misses a game as well. We had to find someone who didn’t have a rap sheet and Kumar fitted the bill.”

Now according to the modified law, if there is a change of captaincy in the middle of a tournament, the national board must write a letter to the ICC, seeking permission to change the captain.

What if a full member player wishes to return to the Associate member side?

What if tomorrow Eoin Morgan wishes to play for Ireland again? It took him five years of representing county side which made sure he was qualified to play for England. Now if he wishes to return to Ireland, previously it would have taken him four years. But according to the ICC Player Eligibility Regulation, it will now take him only two years to go back and play for his native country again in case he wants to. This was agreed upon by the ICC in its meeting in June 2013. The decision was confirmed at the CEC meeting. 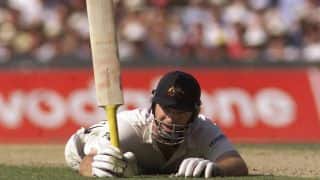 Ashes 2001: A wounded Steve Waugh mauls England with an unbeaten 157 at The Oval