In Pictures: India’s domination over Australia at Nagpur

In Pictures: India’s domination over Australia at Nagpur

Here is the final ODI between India and Australia at Nagpur, in pictures.

Australia arrived on Indian shores in February 2017 to defend the Border-Gavaskar Trophy. In a high-voltage series, they managed to win the first Test at Pune but went on to lose the series 1-2. Six months later, they came back to complete the tour and play a five-match ODI series. Controversies didn t make headlines this time but India s domination did.

Australia were anyway going to struggle without their ace pacers Mitchell Starc and Josh Hazlewood. But India made their stay even more difficult by continuing to produce top notch performances. With the win at Nagpur, India sealed the series 4-1. Returning the favours of 2015-16 series, India beat Australia for the first time by this big margin. In doing so, they also climbed to the top spot in ICC ODI Rankings.

Here is the final ODI in pictures:

The Nagpur track stormed a lot of controversies in the recent past. It was rated ‘poor’ by ICC after the India-South Africa Test in 2015. The relaid surface was expected to behave differently. The curator said it had plenty for batters and the bowlers.

Australia elected to bat. It was again going to be David Warner vs Bhuvneshwar Kumar. Bhuvi induced an edge early in the first over. It just fell short of Rohit Sharma, manning the second slip. Warner was extra cautious from thereon and went on to craft a fine fifty.

Aaron Finch continued with his fine form. He looked in ominous touch and stroked a 26-ball 32 before Hardik Pandya provided India the crucial breakthrough.

Nagpur never fails to disappoint when it comes to attendance. The crowd came in numbers on this Sunday to root for their fans. They got plenty of entertainment from both sides.

The man with golden arms

Kedar Jadhav was surprisingly introduced into the attack ahead of the regular spinner Akshar Patel. Jadhav has made it a habit to provide breakthroughs. He got the priced scalp of the Australian skipper Steven Smith for 16. Australia were in the back foot. For the first time in his ODI career, he finished his quota of 10 overs and gave away only 48.

Injured for the first 3 games, Akshar Patel did not have a great outing at Bengaluru. However, the all-rounder made amends and picked 3 crucial Australian wickets.

Australia were struggling at 118 for 4 in the 25th over. Travis Head and Marcus Stoinis added 87 for the fifth wicket to mark Australia’s recovery. Indian bowlers, Bhuvi and Jasprit Bumrah in particular, were phenomenal at the death as Australia were restricted to 243 for 9 on a two-paced surface.

The openers seal it again

Rohit and Ajinkya Rahane added 124 for the first wicket. Rohit went on to score a match-winning hundred while Rahane supported well with 61. It was a true exhibition of brilliant stroke making.

Rohit and Virat Kohli love batting with each other. They stitched 99 for the second wicket. Rohit went on to slam his 14th ODI century. He also completed 6,000 runs in ODIs and surpassed Hardik Pandya for most number of sixes in 2017. Rohit deservingly was awarded the Player of the Match.

India were trailing 0-4 heading to Sydney in 2015-16. Manish Pandey’s brilliant century helped India to a famous win to make it 1-4 for India. Pandey may not have registered a fifty-plus score in this series but it was off his blade that the winning runs came. Pandey smacked back-to-back fours off James Faulkner to take India home with 43 balls to spare.

HARDIK PANDYA: The superstar we will keep hearing about!

India with a rating of 120 are now the No.1 side in ODIs. They have been topping the charts for over a year in Test cricket. This win serves well for Indian cricket. 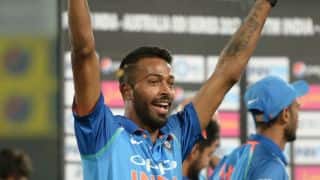 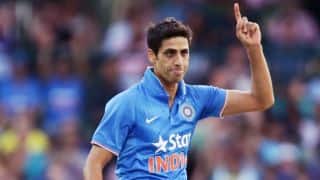