India squad for Australia series 2013: Too many bowlers spoil the broth?

India squad for Australia series 2013: Too many bowlers spoil the broth?

India announced a 15-man squad for the one-off Twenty20 International and the first three of seven One-Day Internationals against Australia later this month. While all the focus and the debates have centred on the comeback of Yuvraj Singh and the exclusion of Dinesh Karthik and Umesh Yadav, Jaideep Vaidya goes behind the scenes and analyses the balance of the squad, while comparing it to Australia's. 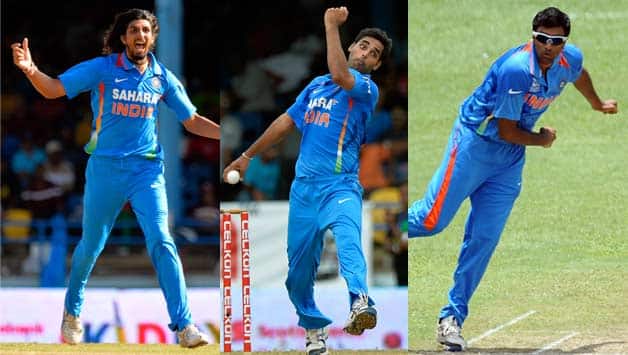 Ishant Sharma (left), Bhuvneshwar Kumar (centre) and Ravichandran Ashwin are almost sure shots into the Indian team. But if India do start the series well, they are unlikely to change a winning formula and that could prevent others in the squad from getting a game © AFP

India announced a 15-man squad for the one-off Twenty20 International and the first three of seven One-Day Internationals against Australia later this month. While all the focus and the debates have centred on the comeback of Yuvraj Singh and the exclusion of Dinesh Karthik and Umesh Yadav, Jaideep Vaidya goes behind the scenes and analyses the balance of the squad, while comparing it to Australia’s.

‘The Yuvraj (prince) returns‘. All the headlines of the dailies on October 1 are expected to follow a similar script. It isn’t that Yuvraj Singh‘s return to the fold was not expected and predicted by anyone with a voice on the internet or media, given his prolific scoring recently and especially given the character he is whose story is imbibed in the hearts of Indian cricket followers, right from his breakthrough innings against Australia at Nairobi in 2000. Over 13 years, Yuvraj has taken his fans on a rollercoaster: from the towering highs of Lord’s 2002, Durban 2007 and the 2011 World Cup, to the shattering lows of his diagnosis of cancer and the drop in form that followed his cure from the illness and return to fitness.

Yuvraj was dropped from the Indian team earlier this year after poor outings across all three formats against England and Pakistan. However, as you would probably read in the papers, the ‘never say never’ man of Indian cricket was always going to make a comeback, as he proved with his performances for India A and India Blue, for whom he scored 389 runs in total at an average of 64.83. Welcome back, Yuvi. Singh is King, indeed, as the red tops would say.

Now, before this writer also gets carried away and delves into the fairytale that is Yuvraj’s story, it must be highlighted that there is much to talk about with regard to the rest of the Indian squad as well. The selectors have gone in with five specialist batsmen in Virat Kohli, Rohit Sharma, Shikhar Dhawan, Suresh Raina and Ambati Rayudu. Apart from this, adding depth to the batting are all-rounders Yuvraj and Ravindra Jadeja, along with of course skipper Mahendra Singh Dhoni, who is the only wicketkeeper-batsman in the squad. Six out of the abovementioned eight would walk into the playing eleven; the choice would be between Yuvraj and Rayudu. And given the southpaw’s form, smart money would be on Yuvraj making the cut ahead of Rayudu.

From the bowlers, Ravichandran Ashwin, Bhuvneshwar Kumar and Ishant Sharma are almost sure shots into the team as well, unless India decide to go with two spinners. In that case, Amit Mishra will come in for one of the pacers. So, 10 of the 11 spots in the team are already all but confirmed. This leaves four bowlers fighting it out for one spot.

While it is always prudent to have some back-up in your bowling attack, especially if you’re India whose struggles in the discipline are well documented, having seven specialist bowlers in a squad of 15 is a tad surplus to requirements. It shows a distrust in your bowling attack and perhaps some overconfidence in your traditionally strong batting which is admittedly packed with performers. But what if the batting fails? Is there enough cover from the all-rounders, who number only two (not counting Ashwin)?

Even Australia have gone in with just five batsmen (Aaron Finch, Phil Hughes, Michael Clarke, George Bailey and Adam Voges) but they do seem to have some back-up in the form of as many as four all-rounders who have been given a ticket to India, including Shane Watson, James Faulkner, Moises Henriques and Glenn Maxwell. Australia are bringing with them just four specialist bowlers in Mitchell Johnson, Nathan Coulter-Nile, Clint McKay and Xavier Doherty, and if you add wicketkeeper-batsman Brad Haddin to the mixture then you’ve got yourself a squad which looks well balanced on paper.

India obviously expect their batsmen to win the series for them and would probably be looking to shuffle the bowling attack across the four matches for which the squad has been announced. If India do start the series well, that could mean that players such as Shami Ahmed, Jaydev Unadkat and Vinay Kumar would not get a game at all, given India’s general reluctance to change a winning formula regardless of the series result. But when you’re up against a formidable unit such as Australia, it’s a different ball game altogether. India can only hope that the ploy works.

Michael Clarke ruled out of India tour due to back injury; George Bailey to lead Australia