The squad for India’s much-anticipated tour of England squad has been announced. In 2011, Indian team was whitewashed 4-0. On well-manicured English grounds,  they had no answer to opposition’s superb all-round performance. Three years later in 2014, it is time for India to rise to the challenge of playing in alien conditions and make a rip-roaring comeback by winning the series.

If we look to the Indian team, the big news is that experienced left-arm pacer, Zaheer Khan hasn’t been selected. He has been down with fitness issues in recent times and it seems likely that he won’t play for India again in Tests.  He bowled with vitality and vigour in England in 2007. But in 2011, he looked well short of a gallop, while bowling and flew back home with a hamstring injury. He is one of those few Indian pacers who in recent times have shown that he is good at generating swing and extracting movement off the surface.

It means the Indian attack will be lead by the erratic pacer, Ishant Sharma. When Ishant first came through the ranks, he was expected to touch exalted heights. However, he has struggled for consistency. When a pacer struggles to keep the seam upright on a consistent basis, it is hard to call someone a spearhead. But Ishant  did shine brightly in New Zealand and that is an encouraging sign for India.

Bhuvneshwar Kumar and Mohammed Shami are also expected to do well in the Old Blighty. Bhuvneshwar is well-suited to English conditions. The main strength about him is that he bowls with good control. It is all good to swing/seam the ball. But a pacer needs to bowl with good control to succeed in English conditions. It is also important that he gets used to bowling with Dukes. If selected, Ishwar Pandey the seamer can be a surprise package as well.

Ravindra Jadeja and Ravichandran Ashwin are the two spinners in the side. India will play  Tests at Old Trafford and at the Oval. So both especially, Jadeja with his fine control can come into play. Even the track at Trent  Bridge has been on the drier side recently. Lord’s can be a good batting track, during the second half of the summer.

To do well in England, India need two openers, who can negate the new ball threat. So, Indian selectors have gone for Gautam Gambhir. Gambhir though, has a tendency of playing away from the body and that can act as a hurdle in England. Unfortunately, something similar can be said about other openers in the squad; Murali Vijay and Shikhar Dhawan.

Cheteshwar Pujara, Virat Kohli and Ajinkya Rahane form the bedrock of Indian middle-order. It will be interesting to see how they will adjust to English conditions. MS Dhoni will lead the Indian setup. There was a criticism last time around that he wasn’t proactive, but in his defence, he lacked a bowling attack to take 20 wickets.

England are on a rebuilding path and there is no reason why India cannot flag down England, and engineer a memorable triumph by washing away the challenge on hand with aplomb. 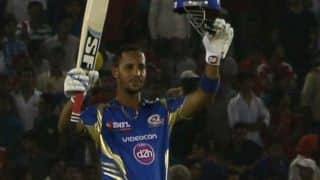