India tour of England 2014: Alastair Cook should consider stepping down to rediscover form

India tour of England 2014: Alastair Cook should consider stepping down to rediscover form

England Test captain Alastair Cook has played 106 matches so far and his batting averages around 45.17. However, the 29-year-old has been going through a rough patch for a very long time. It has been over a year since Cook scored a century. Sudatta Mukherjee wonders whether it is time for the English captain to step aside and work on his batting.

Yet again, Alastair Cook struggled and with the bat. On Friday, on Day Two of the second Test at Lord’s, Cook was dismissed for 10 when Indian seamer Bhuvneshwar Kumar delivered a good length ball, forcing him to fend at the delivery as MS Dhoni tumbled across to take  a smart catch.

Cook’s last century had come in May 2014 against New Zealand, when he had scored 130 at Headingley. He has scored six half-centuries since then, but has been unable to convert them into a big score.

In the last twelve months, Cook has played 13 Tests: these include the home-and-away Ashes contests, the Test series against Sri Lanka and the ongoing five-Test series against India. He averages a mere 23.04 from these Tests with a highest score of 72 against Australia at Perth.

Cook’s captaincy has also come under the scanner from various former cricketers.  Cook has been criticised by former Australian spinner Shane Warne and former England skipper Geoffrey Boycott. Warne called his captaincy ‘boring’, while Boycott said that he “won’t make it as a tactical captain”.

Following the Ashes 2013 Cook hasn’t been able to lead his team to a Test victory, let alone a series win. England had been whitewashed in Australia, beaten by Sri Lanka at home, and Cook was not too imaginative in the first Test at Trent Bridge.

Even on Day One of the second Test at Lord’s, India managed have a good hold on the first session, however, England replied strongly in the second But Cook failed to utilise the advantage, as India once again were led by a strong batting partnership from the lower-order batsmen.

Cook has also been criticised for the way Liam Plunkett has been used in the second Test so far. Boycott was quoted as saying to BBC, “England lost the plot twice — once when Liam Plunkett had to go round the wicket on a pitch which is doing something because they couldn’t get enough balls in good areas to make the batsmen play at the ball. It’s down to the captain and bowler. (Alastair) Cook has to accept some responsibility. He has to say, ‘Hang on, I’m not having that, you’re going to have to bowl better’. He approves of it by allowing it to go on.”

Though Cook has had a good run at the County Championships the previous season, where he had played three matches and averaged around 77.20, if compared to the England’s skipper’s 13 Tests with players who have played more than 10 County matches last year, there are many players who can replace him, while he returns to Essex, gets in shape and returns.

For example, young Zafar Ansari of Surrey has played 12 matches, scored 718 runs including two centuries and four half-centuries with a 100-plus average. James Vince of Hampshire can also feature in the list. The England Under-19 player played 12 matches last season, scored 1,167 runs, which included three centuries and six fifties.

There are also a few experienced cricketers, who have featured in England national squad, who have done considerably well in county, to be considered over Cook’s present national form. England may consider recalling Jonny Bairstow, Eoin Morgan, or even recall Nick Compton.

When Graeme Smith had retired there had been a debate regarding who will lead South Africa in Tests. A similar discussion is due for the English team. The selectors are possibly unable to look beyond Cook to find someone who can lead a young team.

However, Cook’s present form does not inspire much. His captaincy has been much-criticised, and he has not been in great form as a batsman. If Cook, cares much about England’s and his own future, he needs to decide — either to drop himself from the team and work on his overall performance or resign as a captain and concentrate on his batting. 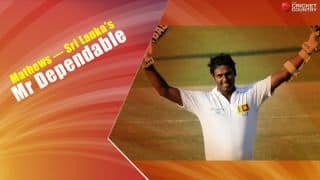 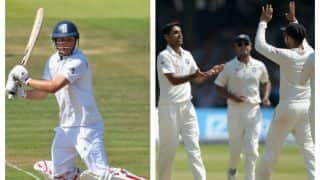