Mathematically, the amount of swing should be measured by the angle and not by centimetres.

There was a time when the viewers got excited to see technologies like Snickometer, Hawk-Eye, and Hot Spot. This was followed by the Decision Review System (DRS). Now it is time to gear up for the new breed in the block, which is being used in international cricket: a parameter to measure swing. Rajarshi Majumdar throws more light on this new technique in the block.

Snickometer is used to determine whether a batsman nicks a ball. If Snickometer fails to determine whether there is a nick then Hot Spot comes into play. Hawk-Eye is not only used to verify a leg-before decision but also used for graphical calculations. Similarly, the Decision Review System (DRS) comprises of all the above mentioned technologies.

The point of this argument lies with the fact that all of the above mentioned technologies are logical and not ambiguous unlike length being the parameter of measuring swing. The technology of measuring swing can only be perfect if it is measured in degrees/angles.

This technology is definitely exciting and bizarre at the same time. This is exciting in a way that it has recently been introduced in the ongoing cricket series between India and England. On the other hand, it is bizarre in a way that if a ball is bowled and it changes its trajectory in the air, the difference between a straight ball s point of contact with bat and the point of contact with the bat after it changed its trajectory is being measured in centimetres.

Mathematically, the amount of swing should be measured by an angle and not centimetre. As a result the viewers will not be able to figure out the exact difference between the two. The technology right now is completely ambiguous as it is difficult to decipher which distance it actually measures. Where should the distance between the actual line and the line (had the ball been straight) be measured? At the crease? At the point where the ball passes the bat?

As seen in this picture, the ball can keep swinging after the point of release, the measure is somewhat flawed. Even if one assumes that the ball makes a 15 cm deviation (to pick a random number) at the point where it passes the crease it will depend on where the ball had started swinging.

So, is the technology useless?

No. The extent of swing can be measured, but the angle of swing is a more relevant factor here than the distance. If we assume the ball has moved in a straight line after swinging, then the angle is a perfect measure. However, given that the ball curls away, one can always use the first derivative (the rate of change of angle), but let us leave the mathematical calculations for a later stage.

For now, the angle will do for us.

(Rajarshi Majumdar is a correspondent at CricketCountry. He played cricket for all age levels under the Cricket Association of Bengal (CAB) for over 12 years. Apart from cricket he is an avid follower of football, supports Manchester United and a foodie at heart.) 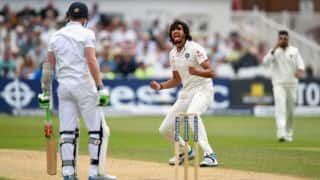