While presence of Wives and Girlfriends (WAGs) is being dragged into blame game following following India‘s dismal show in England, experts opine that such debates reek of chauvinism

Every other British tabloid attributed Becker’s ouster to his after-hours shenanigans with former girlfriend, Benedicte Courtain, the adorable daughter of Monte Carlo’s police chief. Even the irrepressible Ion Tiriac, then Becker’s manager, reprimanded his ward after the shocking 6-7 6-4 2-6 4-6 loss. “I had told him not to do it. It weakens the legs,” said the enterprising Romanian, who now owns the prestigious Mutua Madrid Open, an ATP Masters 1000 tournament.

The Board of Control for Cricket in India (BCCI) hasn’t exactly zeroed in on sex — the excess or lack thereof — on the team’s pathetic showing in the Test series in England. That said a BCCI official was reported as saying something out of the ordinary. Blaming WAGs and calling them a distraction for the players as they wanted to explore the city when it was time for players to hit the nets. And thus, BCCI is considering banning WAGS from accompanying players on tour.

For starters, the BCCI doesn’t have a clear policy on WAGs and their presence on tours. In fact, Bollywood starlet Anushka Sharma is the first girlfriend to be ever allowed on a foreign sojourn. This after her beau, Virat Kohli, reportedly sought ‘special permission’ from the BCCI. But to blame a player’s horrific run of form with bat, ball or both on his lady love is just childish. Or should we say crass?

Every team which didn’t allow players to take their WAGs along to Brazil for the FIFA World Cup failed to make it past the Round of 16. It’s well established among sports scientists that having your partner around — for whatever reason — doesn’t inhibit one’s on-field performance. The only condition is that the athlete must get a full night’s sleep.

Mughda Barve, a Mumbai-based sports psychologist who deals with every cricketer affiliated to the Mumbai Cricket Association (MCA), throws light on this supposed aversion to the presence of WAGs. “As far as I know, the presence of one’s partner does not negatively impact an athlete’s on-field performance. In fact, it only helps the concerned athlete relax,” Barve explains.

“Over the past few days, I have noticed that everyone — from BCCI officials to experts to former players — is trying to externalise the reasons for the team’s failure in England.

It’s time they looked internally. Isn’t it obvious that the team lost because the boys didn’t play good cricket?” she reasons.

Barve goes a step ahead and terms chauvinist the attitude of those questioning the presence of WAGs in England. “I watched the Test matches whenever I found time. The body language of the players was so negative. I have seen them in better spirits while playing in the IPL [Indian Premier League].

“This time, they seemed to have given up the fight quite early. Also, I refuse to buy the theory that WAGs stopped the players from attending practice. No sensible partner would do that. It’s like saying your family is unreasonable and not concerned about your professional commitments,” she says.

What’s also confounding is the BCCI’s reported aversion to the presence of WAGs. The same board has no issues about the 45-day annual carnival called the IPL. Every day is a party. From cheerleaders to WAGs, kids to cousins, friends to relatives, everyone’s invited. Why do you think players look dazed on the field?

According to a Cricket South Africa spokesperson the Proteas have gone from strength to strength ever since the players’ families have joined them on tour. “A player is free to get his partner to any tour. And if the tour is more than six weeks long, then the board funds the partner’s trip. In other cases, the player pays for his partner,” the spokesperson was quoted as saying to DNA. England and Australia, too, have a relaxed policy on WAGs.

It’s time the BCCI stopped looking for ‘other’ reasons for the team’s shambolic performance. Please don’t drag the WAGs into this mess. Jadeja avenged by King Leonidas during India vs England 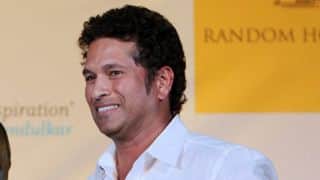