In the Test series, Dhoni certainly didn’t look the captain was in charge of the situation.

Back in 2008 after the infamous Monkeygate scandal during the tour of Australia, it was logical to hand the captaincy over to the man who had done well in the limited overs, Mahendra Singh Dhoni. He had proven track record of winning the inaugural ICC World Twenty20 2007 and the future of Indian cricket seemed to in safe hands. It has been 53 Tests, six years since that moment elapsed, India has gone on to the top, slipped down the ridges, stooped to the lowest possible point, dug deeper holes, shot more bullets into the foot and still finds a new Nadir each time.

Imagine a sailor with the best possible equipment, state of the art design and the best men in the business, takes his mighty vessels with loads of expectation on his shoulder every single time, to each country he takes his ship — to the West Indies, England, Australia, South Africa and New Zealand. He returns empty handed, and each time with new excuses. Wonder if the sailor would have held his job? Talking in context of Dhoni, it is true that the first part of the trip he had a old and out of form  players, but in the latter half of the stint he had what he wanted, young, agile charismatic men. If these losses are unacceptable in any walk of life and why should it be allowed in the game of cricket? If we praised and lauded the captain for the success, we need to do the exact opposite when the results don’t come by. Giving positive points for the captain for the success and the not giving negative points when he fails is unfair on the captain too!

Five countries, four continents 12 winless Tests abroad is a lot of baggage any captain carry and yet remain the head of the ship. Dhoni’s Test record of 26 victories, 14 defeats and 13 draws in 53 games stands 10th in the all time list of captains, and the best for an Indian captain. Eleven of those 14 losses have come away and 10 in the last leg; thereby making him the Indian captain with worst away Test loss record.

If I were Dhoni, then I would be worried about the negative record more, even though my positive record is one to be proud of. Incidentally Dhoni is also the captain with best and worst win and loss record among all the Indian captains. If we still think Dhoni should remain the captain then there is either something fundamentally wrong.

The last time India won a Test abroad was in June 2011 in the West Indies. It was just before Google bought Motorola Mobility; since then Moto has replaced its CEO and when nothing turned into profit it finally sold the company to Lenovo. Though captaining a team isn’t akin running a business, but one can draw parallels from it.

In the last couple of months we have seen India hand over the platter to the opposition, first in Johannesburg, and now in Wellington. It’s not just about the results; it’s also about the misplaced field positions and bizarre team selection which needs to be questioned. When New Zealand were 200 odd behind, Ravindra Jadeja was bowling over the wicket to Brendon McCullum. Even though he was an attacking batsman, by bowling a negative line you are not giving your bowler an opportunity to pick a wicket. The onus was on India to pick wickets, New Zealand just had to bat time and runs would come and they came.

Dhoni is famous for his ‘leather-chasing’ field placement, as one could advise his bowler to bowl tighter line and length. There wasn’t any deep square leg and yet the bowler would bowl a short ball into the body that would easily get dispatched to boundary, and the captain would go through the motions. Dhoni certainly didn’t look the captain was in charge of the situation.

When India were batting in the seconded innings, we saw two mid-wickets and short extra-cover being place to Virat Kohli and Rohit Sharma, thereby setting up a trap for the flick that goes in the air.

It’s not a new for teams to have different captains for different formats. The game’s formats are as different as calk and cheese. You need different approaches, different skills and it won’t be wrong if you choose different men to lead them. India wouldn’t be the first country doing so.

Dhoni is a good limited-overs captain, but his captaincy doesn’t impress much in Test cricket, especially while playing abroad.  He doesn’t bring that same enthusiasm in Tests; either he is too defensive at times or just goes through the motions. The latter is a sign of a fatigued captain. It’s the right time to hand over the captaincy to Kohli, who has shown some maturity at least in his batting and the way he responsibly construct his innings. If not anything better, we can see some fresh ideas, and hopefully some interesting changes.

Also India have less than year before they begin their quest to retain the all important World Cup in 2015, and hence relieving Dhoni’s captaincy from Tests, might help India’s cause. Dhoni is 32-years-old, though he is fit as a fiddle he might be tired mentally. He is valuable to the India team, as a wicketkeeper and One-Day International (ODI) batsman and captain, he need to be preserved and taken care of. Who knows the Test captaincy sacking could be blessing in disguise, that one day Mahendra Singh Dhoni would realise. 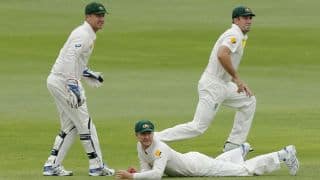