About 10 minutes into Indian team’s ‘media’ session the Sahara Room burst into laughter.

About 10 minutes into the Indian team’s ‘open media’ session on Thursday, the cramped Sahara Room at Sandton Towers burst into laughter. A local scribe, who first reminded Zaheer Khan of his phenomenal head-to-head record against Graeme Smith, wanted to know whether the pace spearhead had formulated a new gameplan for his bunny. “I think I just have to turn up there,” Khan quipped.

Thirteen – that’s the number of times Khan has got the better of South Africa’s Test skipper in 29 international innings. Thirteen (or thereabouts) is also the number of months since Khan last played a Test for India. And here he is: fitter, leaner and wanting to be meaner as the visitors desperately seek a revival of sorts after a short but forgettable One-Day International (ODI) series.

Belief. That’s another point Khan touched upon. All these years, India have won just two Test matches on South African soil and Khan was part of both triumphant units, the first led by Rahul Dravid (Johannesburg, 2006) and the second under MS Dhoni (Durban, 2010). In other words, Khan knows what it takes to beat South Africa in their own backyard. “You have got to have the belief. And you have to back yourself and play good cricket. You need good days together. That was our success mantra then,” the 35-year-old veteran of 88 Tests remarked.

Khan’s time away from the glare of international cricket was eventful to say the least. Like a globe-trotting hippie, he was all over the place. But unlike those free-spirited beings, his sojourns to Brive-la-Gaillarde (a hamlet in the south of France) and Bloemfontein (not far from Johannesburg) were all about plan and purpose.

And the man with 295 Test wickets is pleased with the progress he’s made. “I can’t be happier. I played a lot of first-class cricket and bowled nearly 200 overs. I covered all the series and ticked all the boxes,” Khan said. Actually, he bowled 160 overs in six matches (two for India ‘A’ and the rest for Mumbai), picking up 23 wickets in the process. Khan will now have the opportunity to make a mark against a South African Invitation XI over the next two days in Benoni.

R Ashwin, one of the six players who addressed the media, also put the onus on Khan. “Of course, he has done it in the past (lead the attack). It’s not like we are putting any pressure on him. But he is indeed the leader of the bowling unit. There are no two ways about it. Zaheer bhai will add a lot of value to the team,” Ashwin said.

Given that he is the senior-most player in the squad, Khan was asked how he planned to don that hat in the absence of Sachin Tendulkar. “It’s how you are going about your business. I haven’t really experienced (the pressure of being the most capped player), but you people have definitely put that thought in my mind.”

Injuries –– from hamstring to shoulder to mysterious ones –– have followed Khan like a shadow. But he believes he has conquered that weakness too. And all those who have watched Khan ply his trade in the glamourless world of domestic cricket are of the opinion that he is not too far from his best. Armed with the patience of a guerilla warrior and the precision of a clockmaker, he waits for the right moment to strike. His exciting pace, nagging length and bagful of tricks come in handy. “We will do the needful to win. I know we can do what it takes to win the series,” he declared.

Come December 18 and the sight of Smith at the other end will be auspicious. 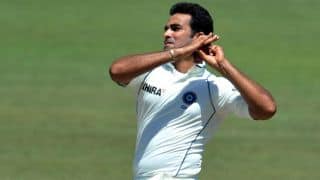