On a typical Martian Chennai track, India thumped Australia by eight wickets in the first Test to open their account in the four-match Border Gavaskar Trophy. As the teams gear up for the second Test in Hyderabad, Jaideep Vaidya lists five talking points from the Chennai rubber: When Sachin Tendulkar settled in at the crease on Day Two of the first Test, you could observe a distinct change in his batting © IANS

On a typical Martian Chennai track, India thumped Australia by eight wickets in the first Test to open their account in the four-match Border Gavaskar Trophy. As the teams gear up for the second Test in Hyderabad, Jaideep Vaidya lists five talking points from the Chennai rubber:
1. 1.2 billion people breathe a sigh of relief as Sachin Tendulkar returns to form:

He may not have got to the magical three figures — something he hasn’t done since the January of 2011 — but one could sense that something was on the anvil when Sachin Tendulkar walked out to bat at No 4 on Day Two of the Test, with India wobbling at 12 for two.

Tendulkar’s love affair with Chennai is well documented. The southern Indian city is as good as his second home, with the Little Master having recorded some terrific knocks here in his 24-year career. In the last Test that India played in Chennai, in 2008, Tendulkar’s magnificent fourth-innings ton helped India chase down a mammoth 387-run target against the Poms. So, it was obvious to expect loud cheers when James Pattinson bowled Virender Sehwag early in India’s first innings to give Australia their second wicket. Enter the hero.

To say Tendulkar was struggling is an understatement. Ever since he helped India win the World Cup on home soil in April 2011, the runs had dried up faster than a pond in the Sahara. Several experts and pundits opined that the master’s technique was faltering and his 39-year-old body creaking. The current series was predicted to be his last by editors in their newspapers in big, bold lettering.

But when Tendulkar settled in at the crease, you could observe a distinct change. Something was different. His feet were moving swifter than a tap dancer and his body was shaping up to play the shots like clockwork. It was vintage Tendulkar on display as he went on to share 90-run partnerships with Cheteshwar Pujara and Virat Kohli. Just when you thought century no 101 was imminent, Nathan Lyon got the ball to pitch in the rough, take a vicious turn, beat Tendulkar and hit the stumps. He was gone for 81.

However, the innings gives a lot of hope for the remainder of the series. If Tendulkar has a successful stint in the middle in this series, who knows, you might just get to see him make the South Africa tour in November, where his experience will be vital.

2. India’s opening pair — the chink in the batting armour:

India piled on 572 runs in the first innings with Kohli scoring a hundred and skipper MS Dhoni hitting a spectacular double ton. Tendulkar and Pujara too looked in good touch, although unable to convert into big knocks. If there was one blemish in India’s batting card for the first Test, it was right at the top against the two openers. 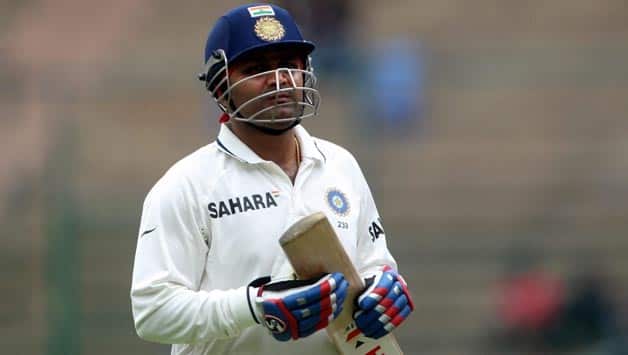 Sehwag and Murali Vijay scored a combined 37 runs across the two innings, as a result of which Dhoni was showered with questions on whether the team will try a different combination in the next Test. The Indian skipper was, however, unperturbed, and rightly so.

Dhoni said that both the openers need to be given more time and requested everyone to not judge them on the basis of one match. They need to be given the comfort that they are wanted in the team and that their necks are not on the line with a couple of poor innings. As this writer had suggested in an earlier article, the Indian team management and selectors need to give individuals, especially the newcomers, a longer rope to prove themselves. Sehwag and Vijay should ideally open in all four Tests, unless their performances horrid enough to warrant a change.

Apart from Tendulkar, the other distinct change that was observable within the Indian camp was the approach of Dhoni — towards his captaincy and batting. The 31-year-old had been under a lot of criticism and pressure due to employing a defensive approach in bygone tours, even as recent as the 1-2 defeat to England. But in Chennai, there was a different Dhoni who walked out leading his team. MS Dhoni was in his best elements in Chennai © PTI

Dhoni attacked Australia with his three spinners and crowded the on-strike batsman with close-in fielders for long durations. Even when Michael Clarke went on the counter-attack in both innings, Dhoni did not alter his strategy and stuck with an aggressive field. He seemed more involved, more expressive, and more proactive than he was in the last two years. One particular example that comes to mind is when a visibly flustered Dhoni reprimanded Ishant Sharma for not putting in his 100 per cent in trying to effect a run-out.

His 224 from 265 balls at 84.52 with the bat further reinforces this observation. Dhoni went from 97 to 201 in one session in a bid to increase India’s run rate and lead. While he has always been a quick scorer in the limited-overs format, such a brisk, attacking innings was on display in Tests after a long time.

“He has changed a bit from the England series. He is more assertive,” Sunil Gavaskar told NDTV after the match. An assertive captain is perhaps exactly what India need to come good in this series.

4. Why is India’s best spinner warming the bench?

India selected two pacers in the Chennai Test in Ishant Sharma and debutant Bhuvneshwar Kumar. Together, they accounted for only 33 of India’s 226 overs bowled in the Test. Needless to say, the duo went wicketless in the match as the spin trio — Ravichandran Ashwin, Harbhajan Singh and Ravindra Jadeja — shared all 20 wickets among them, with Ashwin getting 12 himself.

So, one could say the move to underbowl the pacers was justified. But then, why select two pacers if you’re not going to use them? And more importantly, why bench your most successful spinner of late, Pragyan Ojha, when you have one of the most spin-friendly pitches in the country at your disposal? Will Pragyan Ojha play in his hometown Hyderabad? © Getty Images

Ojha’s exclusion from the XI was a major drop-jaw moment on the opening day of the Test. Dhoni justified the move in the post-match presser saying that it made sense to use two off-spinners who would move the ball away from the four left-handers that made up Australia’s top six batsmen. Dhoni also said that Jadeja got the nod to be the variation spinner over fellow left-armer Ojha because the former can bat as well.

All that is well and good, and it must have been a tough call Dhoni and the powers that be would have taken. But sidelining your best spinner — the highest wicket-taker in the England series — was truly a bolt from the blue. With the Hyderabad pitch expected to turn less compared to Chennai, Ojha might, to no fault of his own, find himself missing out again.

Australia’s major concern ahead of this series was spin. Yet, they went ahead with four pacers and a lone spinner in the first Test. While skipper Clarke defended his team’s call to play to its strength, even as Australia’s pacemen took eight out of the 12 Indian wickets that fell in the game, playing just one specialist spinner in Lyon on a crumbling, spitting clay pit was always going to backfire.

Lyon picked up only four victims in the match, and also leaked far too many easy runs. He was targeted by the likes of Tendulkar and Dhoni, who picked his turn with ease. Dhoni himself scored 104 runs out of his 226 off Lyon, in just 85 balls. Australia have the option of playing left-arm spinner Xavier Doherty at Hyderabad. The 30-year-old had bowled decently in one of the the tour games, when he took three for 108 from 24 overs. However, the million dollar question beaming in front of Australia is who to drop if Doherty has to come in. Peter Siddle, the most experienced of the lot, and a fit James Pattinson, who took six wickets in the first Test, select themselves. All-rounder Moises Henriques had a stellar debut with the bat (68 and 81 not out), even though he could not inflict too much damage with the ball. So, the only viable option would seem Mitchell Starc.

In the post-match presser, Clarke refused to be drawn into the debate whether Australia had made a mistake by choosing a pace-heavy attack and said better bowling performances from those selected could have helped Australia avoid defeat.

“Australian spin took three wickets in the first innings, fast bowling took a lot more,” Clarke said. “That doesn’t mean to say that playing three fast bowlers and a medium-pace all-rounder, we got that right. We need to assess, we need to look at conditions again and work out what we think is the best XI [in Hyderabad]. It’s not just about selection, it’s about how you perform, I don’t think we bowled well enough in our first innings and we certainly didn’t bat well enough in our second innings.

Point taken, Michael, but at this juncture, with the way India exploited the spin-friendly wicket in the first Test, it would augur well for Australia if they play the extra spinner. Even though Doherty may not be a Monty Panesar, it would be a fruitless task, as they experienced in the first match, to try and take the majority of 20 wickets with pace on the dust bowls that are likely to be served wherever they go.