Australia’s selectors did surprise when they announced their 13-man squad for the first three One-Day Internationals (ODIs) against India. The squad was packed with fast bowlers and medium-fast bowling all-rounders. There was no room for spinner Nathan Lyon, while all-rounder Shane Watson was also left out. The selection panel reasoned that the pitches in Perth, Brisbane and Melbourne, where the first three ODIs are scheduled to be played, would assist quick bowlers and hence there was no need for a specialist spinner at least for these games. However, the presence of a frontline spinner was a must. FULL SCORECARD: Australia vs India, 1st ODI at Perth.

Their pace-attack for the first three games will be lead by Josh Hazlewood. No surprises here, as the pacer was expected to spearhead the attack in absence of injured Mitchell Starc. South Australia and Adelaide strikers’ bowler Kane Richardon, who has played eight ODIs and two Twenty20 Internationals (T20Is), is also back in the squad having last played against South Africa in Canberra in 2014. The remaining two slots of pacers have been filled by uncapped left-arm pacer Joel Paris and Victoria pacer Scott Boland. All-rounders James Faulkner and Mitchell Marsh add more strength to the pace attack while Glenn Maxwell provides the solitary spin option. Let’s understand this attack better by analysing it with SWOT (Strengths, Weaknesses, Opportunities and Threats) technique.

Strengths: Indian batsmen have traditionally been excellent players of spin and poor against pace. Moreover, this problem is highlighted when they travel abroad. This way, Australia have got it right in going for an all-pace attack. With the pitches in Perth and Brisbane assisting their style of bowling, it can further expose the frailties of Indian batting Down Under. The presence of unknown commodities Paris — who has the ability to swing the ball both ways, and Boland — who is an exceptional bowler in the death overs, will keep the Indians guessing.

Paris may have played just two First-Class matches so far, but his 14 wickets at 16.85 apiece speak volumes about his talent. His performance in 13 List A games too has been fascinating, with 24 wickets at 17.79. Boland too has been impressive this season and was picked for the second and third Test against the West Indies, but missed out on selection. England great and Boland’s team-mate at the Melbourne Stars in the Big Bash League (BBL), Kevin Pietersen also rates him highly. He had recently described Boland and John Hastings’ efforts for the Stars as the best death bowling he had seen. With the likes of Paris and Boland, Australia will like to surprise India in the series. Read: India vs Australia 2015-16: Squads picked up with an eye on the broader picture — ICC World T20 2016.

Weaknesses: The only possible weakness of this attack is the absence of a frontline spinner, which makes it look one-dimensional. Lyon could have been added to the squad to give it more variety. But with him not around, the only option Australia have is Maxwell, whose off-spin should not pose any threat to the strong Indian batting. Though skipper Steven Smith can also chip-in with his part-time leg-breaks, but again on the whole the spin-front remains the weak link of this attack.

Opportunities: With Starc, Nathan Coulter Nile, Pat Cummins, Peter Siddle out with injuries and James Pattinson not considered for selection, the first three games provide a great opportunity to the likes of Richardson, Paris and Boland to stake claim for a permanent berth. It also gives Hazlewood a chance to show that he is equally capable of leading the Australian attack. Young all-rounder Marsh has been growing in stature with every game he plays, yet he has to compete with senior player Watson for the all-rounders’ spot. Latter’s absence gives him the opportunity to seal his place.

Threats: The Australian attack is young, raw and at the same time, inexperienced. Frontline pacers Hazlewood, Richardson and ‘yet-to-play’ Paris and Boland share only 21 ODIs between them. Add Faulkner and Marsh to the list, and the ODI count goes to 88. Comparing it with the combined experience of Indian attack’s top-six (Ishant Sharma, Mohamamd Shami, Umesh Yadav, Ravichandran Ashwin, Ravindra Jadeja and Axar Patel share 418 ODI caps between them) gives a better picture of how inexperienced the Australian attack is. The Indian batsmen would look to exploit this chink in their armour and if they are able to get on top of the Australian bowlers early on, there is a possibility of their crumbling under the pressure. Read: Inexperience in Australia’s pace arsenal gives Virat Kohli an opportunity to improve his dismal record.

On the whole, the Australian attack looks fresh and full of promise. The young bowlers will have some nervous moments upfront, but if they can hold on to their nerves and do what they have been doing well so far at the domestic circuit, they have the potential to spoil the party for the Indian batsmen. Whether or not can they do so, will unfold on January 12 when the first game of the five-match series goes underway. 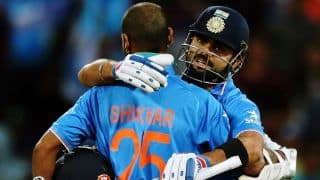