Australia and India  crossed swords with each other in the fourth One-Day International (ODI) of the five-match series at Canberra, a game which was filled with breathtaking excitement. But unfortunately for India, the game ended in favour of the hosts as the former lost the battle by 25 runs. With this win, Australia have now gone up by 4-0 and will now eye an whitewash. The game took many twists and turns and witnessed many individual performances on which the fate of the game was based. Suraj Choudhari points out such instances that defined the game.    FULL CRICKET SCORECARD: India vs Australia, 4th ODI at Canberra

Flying start for Australia: Australia got off to a flying start as both the openers took on the Indian bowlers from the start. David Warner displayed his powerful hitting abilities whereas Aaron Finch too kept the scoreboard ticking. Indian bowlers failed to draw early blood on the flat surface and paid a heavy price for that as they accounted for a 187-run stand between them.

Aaron Finch’s century: Finch converted his good start into a big one by scoring a scintillating century. He scored 107 off equal number of deliveries and laid the foundation for a big total. His innings contained nine boundaries and two massive sixes. Warner missed out on his much deserved century as he was bowled by Ishant Sharma while batting on 93. Full Cricket Blog: India vs Australia 2015-16, 4th ODI at Canberra

Smith’s cameo: Australian skipper Steven Smith got the ball rolling from the outset at Canberra; he was batting with unparalleled confidence and looked set for a big score. Smith stepped on the accelerator and shifted gears as soon as he came out to bat. In no time, he reached the 50 runs mark and made a well played   off just 29 deliveries at a scorching strike rate of just over 175.

Australia stumble in the end: The platform for a massive total was built for Australia and a score of 350 above was on the cards. Although they got to a desirable target but at one juncture that score looked almost impossible. They lost the key wickets of George Bailey, James Faulkner and Matthew Wade in quick succession and found themselves in deep trouble. Ishant got the better of Bailey which was followed by Faulkner’s dismissal by Umesh Yadav and then the latter and Rohit Sharma accounted for the run out for Matthew Wade.  MATCH REPORT: India’s spectacular capitulation awards Australia 25-run win in 4th ODI at Canberra

Maxwell’s final over hurrah: Maxwell is well-known for his unorthodox yet effective style of play and he once again did it in the final over of the Australian innings. Hs smashed Ishant for three boundaries and a maximum to help his side reach close to 350 runs mark.

India’s perfect start: India fought fire with fire as both Shikhar Dhawan and Rohit Sharma started off on a promising note. They provided an ideal start but Rohit didn’t manage to stick around for long as he was dismissed for 41 by Kane Richardson. Despite losing a wicket, Virat Kohli and Dhawan made sure the run rate never climbed by scoring at a good pace. This was the perfect start India would have wished for.

Kohli-Dhawan captivating stand: The partnership between Kohli and Dhawan almost inscribed history as they were on the brink of recording the highest partnership stand for an Indian pair against Australia. Kohli and Dhawan put up a stand of 212 runs and missed out by a whisker of two runs as the record partnership is of 213 runs. The duos paced their innings well and were astute in their approach. A boundary in practically each over was being struck along with singles and doubles. Due to their stand, Australian bowlers were at sixes and sevens. Dhawan made a much deserved 126 wheras Kohli made a determined 106.

Virat Kohli taking on James Faulkner: The banter between Kohli and Faulkner made the headlines in their third encounter at Melbourne. Kohli on this occasion had the last laugh as he constantly kept smashing Faulkner whenever there was any minor room for error.  The best was when Faulkner charged in to bowl his fourth over and was welcomed by a massive six over long-on on the the very first delivery of the over. As soon as the ball cleared the long rope, Kohli had a stern look at Faulkner with a gentle smile in his face.

John Hastings scare: Hastings probably turned the course of the match by chipping the two prized wickets of MS Dhoni and Shikhar Dhawan. This triggered the Indian downfall as they lost their well set batsman Dhawan and later their skipper Dhoni nicked one behind the stumps. India were 277 inside 38 overs when Dhawan and Dhoni walked back. This opened the inexperienced Indian middle-order and the game was evenly poised.

Kane Richardson inflicted immense damage: Richardson made the utmost use of the pressurised situation as he ran India rampant with his alluring spell. Richardson got rid of the centurion Kohli and then Ajinkya Rahane, Rishi Dhawan and Bhuvneshwar Kumar for mere scores. He never let India come back into the game and any threat whatsoever was taken care by him. His spell arguably decided the destiny of the game.

The dramatic Indian fall: The Indian batting order collapsed like nine pins on a wicket which was favourable for batting. From 277 for the loss of two wickets, India were bowled out for 323. They lost nine wickets for 46 runs and have recorded one of the most horrible and dramatic collapses in the history of cricket. 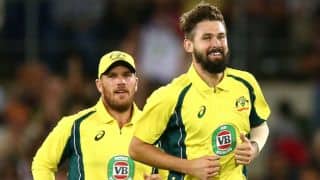 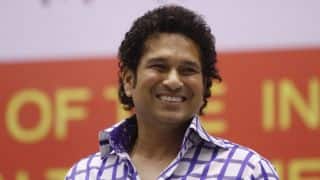