Presenting the best and worst from the third day's play at Sydney Cricket Ground.

Weather played the spoilsport in the final session forcing early stumps on the third day of the fourth and final Test between Australia and India in Sydney. Australia began the day sprightly, but it was the tourists who finished it on top by the time it ended.

Here’s our selection of the top moments from the rain-truncated affair: –

Came from the bat of Marcus Harris, Australia’s top-scorer of the innings so far. He came out with a positive intent, channelling his David Warner to take the attack to the Indian bowlers. He was brave, not afraid of using his feet and going the aerial route to score boundaries. His plan was clear not letting the bowlers, especially the spinners dictate the terms early on. Against Kuldeep Yadav, who eventually finished as the pick of the bowlers, he struck three fours in a single over. However, his best shot of the day was against a relentless Ravindra Jadeja. It came off the third delivery of the 17th over. The opener was batting on 32 and shimmied down the track. Jadeja spotted it and shortened his length but Harris maintained his composure to go through the cover drive sending the kookaburra racing past the boundary.

Shot of the Day? Shane Keith Warne reckons this is the Shot of the Match!#AUSvIND | @MastercardAU pic.twitter.com/GH9uuHkJfh

There’s a tough competition for this one. Nearly, every Australian batsman was out to a bad shot. However, the dismissal of Travis Head takes the cake. India were steadily taking control after being outplayed in the first session’s play. Australia, from 128/1 had slipped to 152/4 after Marnus Labuschange’s dismissal. They needed someone to dig in. Head has shown earlier he has the game to do exactly that. And he had started well, reaching 20 off 55. A flat pitch with no help for the bowlers was a perfect chance for him to score big. Kuldeep served him a juicy full toss and all he could do was toe-end it back to the chinaman who completed a decent catch.

There have been a couple of controversial calls as far as fielding efforts go during the series. KL Rahul’s catch at the first slip in the Adelaide Test and Peter Handscomb’s low catch of Virat Kohli in Perth come to mind. In the first session on Saturday, Australia openers had shown positive intent, scoring quick runs. Harris gave Jadeja the charge, lifting him over mid-on but miscued the shot. He failed to get the distance and Rahul put in a full-stretched dive and it appeared he had taken an excellent catch. Jadeja had already taken off towards the fielder in celebratory mode before being stopped in his tracks. Rahul had immediately signalled it had dropped short, drawing praise from umpire Ian Gould.

A good effort from Rahul and he immediately says it bounced. Great stuff. Umpire Gould a big fan of it #CloseMatters#AUSvIND | @GilletteAU pic.twitter.com/7nA0H5Lsc7

Walking in at the No. 3 spot, Labuschagne had got the start hitting seven fours to reach 38 off 94. It was the fourth delivery of 52nd over from Mohammed Shami that Labuschange flicked towards midwicket. He was a bit early into the shot and couldn’t keep it down. The ball went low and right to Ajinkya Rahane at short mid-wicket and in a jiff, he plucked it millimetres off the ground to complete a stunning catch. A gutted Labuschagne was left to rue his luck.

After some question marks overt his captaincy, Kohli is finally earning praise

Tactically I like the way Kohli kept manoeuvring those leg side fielders. As a batter that s a nightmare to constantly have to change your angles when the ball is coming in like that! Eventuated in a wicket. Well played.

Has to be the bad light. India were on top. Peter Handscomb and Pat Cummins were fighting, aiming to defy the bowlers. It was turning into an absorbing session of play when the two on-field umpires finally had enough and took the players off the field on account of bad light. Eventually, as was the forecast, rain arrived forcing early end. 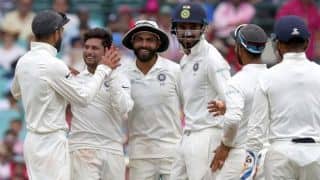 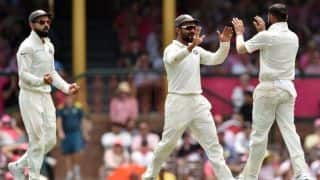