From Australia s point of view, it was a good toss to lose. Ricky Ponting explained on Channel Seven that they didn t know whether to bat or bowl first. Perhaps it was the grass, and the experience of having played that drab Ashes draw against England last year when their bowlers found no help at all.

From India s point of view, it was a good toss to win. In 2018, their batting has been found wanting under pressure of unfavourable conditions and opposition totals on far too many occasions. At some point their rotten luck had to change, and voila, Virat Kohli called rightly when faced with arguably the flattest day one wicket they have seen since January, barring the The Oval.

From Mayank Agarwal s point of view, it was an excellent toss to win. Back in 2014 India were under the pump, batting second and they had a debutant in their playing eleven. It was KL Rahul and he played a horrendous shot in his maiden innings, batting lower down the order. That last bit was irrelevant, he admitted later. The Melbourne Cricket Ground can be an intimidating beast, any of the five days, more so on Boxing Day. (SCORECARD: INDIA vs AUSTRALIA, 2nd TEST)

Rahul could feel it back in 2014, and there is no reason to doubt that Agarwal felt it today too. Even so, that intimidation provides both a challenge and an opportunity. Challenge, in that you have to overcome your nerves after staying up all night, having waited for this Test debut all your life. And opportunity, in that it is the next step soak it all in and just do your job.

It is nearly impossible to tell when intimidation mixes up with challenge and later opportunity. Does the national anthem help? Taking guard in the second over after your partner? Watching the pitch playing no tricks except the demand to see off the new ball? Again, it is impossible to tell for Agarwal, but somewhere between his first scoring shot and a maiden half-century in his debut Test, he found his comfort zone. (ALSO READ: Agarwal and Pujara set agenda for India s dominance at the MCG)

Agarwal s knock can be defined as part relief and part statement. The former comes in when you see how narrowly he has missed out in the past from making his international debut. By rights, he should have played his debut Test against West Indies in Hyderabad, after Rahul failed his long rope in Rajkot. Then, he ought to have been picked in the Test squad for Australia but Murali Vijay s experience (not so much County form) denied him.

That statement bit comes in at this juncture. Indian opening pairings have struggled so badly in 2018, that this was only the second instance in 11 overseas Tests that Kohli didn t arrive at the crease before the scoreboard read 100. Agarwal s knock wasn t fantastic because he helped do so for the first time since Nottingham; instead it was comforting that there is an opener available to this Indian team still capable of doing the twofold job of scoring runs and shielding the middle order (read Kohli). Of course, he wasn t along in doing that, at least in the first part. (ALSO READ: To the manor born, Mayank Agarwal stars on Test debut)

For Hanuma Vihari, the toss didn t matter. Not after he had accepted the makeshift role of opening the innings when India didn t have two in-form openers to put out. Not after the team management decided to give Rohit Sharma his 10,756th chance in Test cricket at someone else s cost. The only thing that mattered was doing a job, similar to what Agarwal did.

To an extent Vihari was able to do it while he was blunting the ball, Aakash Chopra must have been proud watching from the commentary box. The scoring bit didn t happen though, and for good reason. On a pitch less useful than a Christmas tree day after December 25, Australian pacers exhibited a hard-working trait all day. Early on, they realised that steep bounce, well aimed at the batsmen, was their best weapon and Vihari, thanks to his inexperience, didn t have an answer atleast not yet.

For the rest of the day, Australian bowlers worked like ants building a mound. They toiled and toiled, cutting off runs even was the breakthroughs wouldn t come, and made sure India s scoring rate never got away from them. It was much like how India had bowled in Adelaide protecting that mild score of 250 on a decent batting surface. That Indian effort was a ready-made template for clutch-control bowling and Australia followed it to the tee.

India finished with 215/2 in 89 overs, a run-rate of 2.41 for the first day s play on the second-easiest batting track they have come across on their travels since January. Is that a good score? Surely, when you consider India have their two best batsmen at the crease. Kohli and Cheteshwar Pujara have the ability to bat Australia out of the game on day two India haven t got many such opportunities on their travels this year, so counting luck at toss is okay.

It is also a good enough score considering the variable bounce generated in the last session, particularly that last half hour when Mitchell Starc bowled a nice spell to Kohli. On a day when not many chances came their way, dropping that catch when he was on 47*, will hurt the hosts.

It is not to say they will not be able to lift themselves up, because the game is tantalisingly poised at the moment with the second new ball only seven overs old. A mini-collapse and India will suddenly not have enough runs on the board for too many wickets. This Australian attack has shown they are capable of inflicting such damage, and as such this Test already stands on a knife s edge, any debate over the pitch notwithstanding. 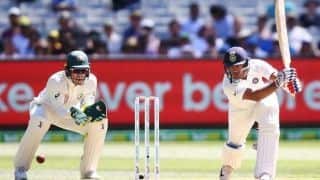 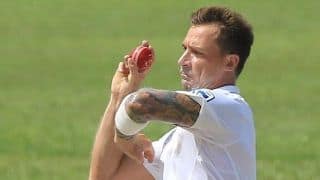