India are struggling to finish games, only three months before the World Cup.

From the T20Is, through the Tests, and now onto the ODIs, there is certain unfamiliarity with the Australian team. Partly, it is down to the bans served by David Warner and Steve Smith, which resulted in much sheen and identity taken away from their national side across formats. Their selectors have done the other bit, in the garb of experimentation and at times, haphazard selection.

Despite lacking in conformity with usually set norms of brashness and in-your-face style of play, there is still one trait that this Australian side is not missing. Preparation behind the scenes, in the nets, in the dressing room, with the technical team, put it how you may like, they know everything about each Indian player and what the team s strengths and weaknesses are, across formats.

During the Tests, their pacers often talked up India s poor opening pairing and their dependency on Virat Kohli. It took Cheteshwar Pujara s magical series to prove them wrong. Prior to that, in the T20I series, Aaron Finch spoke about certain inconsistency in the Indian side that could be negated by home advantage, and assuredly, that series ended 1-1.

Ahead of this ODI series then, it was no surprise once again when Finch spoke about India s top-order dependency. In the last year or so, Rohit Sharma, Shikhar Dhawan and Kohli have scored more than 65 per cent of India s ODI runs. By now, the whole cricketing universe is aware of this fact and technical support staff for all opposition teams have noted this facet about India.

There are two ways to look at it. Since 2016, when India last toured Australia, this top order has kicked up its performances at least a couple of notches. The three of them Sharma, Kohli and Dhawan occupied three of the top four in the run-scorers charts when India lost here 1-4. They has rarely been a let up in the manner they have batted in ODI cricket across conditions and opposition ever since.

It can be deemed strength, if you consider how ODI batting has evolved over the years. Sure, there is still slam-bang at the top in the first 10 overs. But with only four fielders allowed outside the 30-yard circle from overs 11-40, there is a vigorous attempt to have your best batsmen batting through those overs, building up an onslaught in the final stretch. In short, this is India s modus operandi in ODI cricket, and the likes of Sharma and Kohli, in particular, like this approach.

The top three pick up greater responsibility to get runs in this regard, and at this stage in their careers, all three including Dhawan s mega form in ICC tournaments have peaked as limited-overs batsmen. It is good news when it works, very good news in fact.

Since January 1, 2016, India have won 19 ODIs wherein Kohli has crossed 50, and lost 8 ODIs when he has not. When Sharma has crossed 50, India again won 19 ODIs in this interim, and lost 11 when he did not score a half-century. In the same time period, Dhawan has led India to victory on 12 occasions with a 50-plus score, while there have been 10 losses wherein he failed to score a half-century.

While it underlines a great dependency on the top-order, at the same time, it points to an increasing worry about how the middle order reacts with added responsibility.

Finishing innings or games is only one aspect of it, crossing the victory line is a more important parameter. And this is one facet of the Indian ODI batting that hasn t quite come together with only three months to go before the 2019 World Cup.

Partly, it is due to the merry-go-round nature of experimentation wherein the team management tried to find a number four. Starting with KL Rahul in Sri Lanka in September 2017, to Hardik Pandya, Manish Pandey, Kedar Jadhav, Dinesh Karthik and Shreyas Iyer in the subsequent months, to Ajinkya Rahane in South Africa, to Rahul and Karthik again in England, and to finally Ambati Rayudu at the Asia Cup, this has been a game of musical chairs for most part.

The number of games won by this middle order in this time period can be counted on one hand. Pandya impressed in two games against Australia in September-October 2017, the same held true for Karthik and Iyer against New Zealand and Sri Lanka respectively later that year, Rahane had one good partnership with Kohli in South Africa, while England was a total failure for the middle order.

Rayudu brought some semblance of stability to proceedings with good performances in the Asia Cup and against West Indies, averaging 56 in 11 matches. Of course there is a rider herein he scored those runs in the sub-continent and the jury is yet out on he performs in these eight ODIs against Australia and New Zealand. Mind you, he started in Sydney with a two-ball duck.

It puts MS Dhoni s half-century at the SCG in some perspective. Seen in a team effort, it was need of the hour as Sharma later outlined. They batted so many dot balls to get a partnership going, waiting for the field to open up for rotation of strike, and through hitting out later in the partnership, they were able to take the game deep. It didn t work, but in the scheme of things at 4/3, it was need of the hour.

Seen in singularity, there can be no denying that Dhoni knock was a labouring effort from the and in keeping with how he has batted for the last year or so. While it raised questions from those watching is immaterial however, for he is not the only non-functioning entity in that middle order. The vice-captain s comments later only added to the debate whether, at this late stage in his career, Dhoni as a different batsman than he was earlier is even being used optimally or no

As such, the Sydney loss only cast a mirror on India s problems with their middle order and how the team management has been unable to solve these riddles despite ample experimentation in the last two years. And now, time is starting to run out. 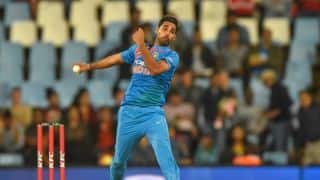