A look at the clutch moments and passages of play that led to India s landmark series win.

Virat Kohli on Monday became the first Indian captain to win a Test series in Australia, after no play was possible at the Sydney Cricket Ground on the final day of the series. India, ranked No 1 in Tests, came to Sydney 2-1 up after wins in Adelaide and Melbourne to retain the Border-Gavaskar Trophy, and the draw in Sydney gave them a landmark Test series triumph on Australian soil.

It is a series win fashioned by the might of Cheteshwar Pujara‘s series-leading 521 runs from a record 1258 deliveries, with some terrific bowling from Jasprit Bumrah and Mohammed Shami, with supporting roles from the likes of Rishabh Pant, Mayank Agarwal and Ravindra Jadeja .

Here, we take a look at the clutch moments and passages of play that led to India s victory.

Day one: Pujara carries India to 250

A first Test hundred for Pujara in seven innings in Australia proved the difference between India being blown away for a small total and one from where they put the hosts under pressure. A familiar tale unfolded on the opening day at Adelaide Oval as Pujara bedded down for a potentially match-shifting 123 from 246 deliveries to get India to 250/9 by stumps on day one. This is the third-longest Pujara innings, in terms of balls faced, in Tests outside of Asia.

Ishant Sharma s extraction of Tim Paine during a third consecutive spell of accurate and nagging fast bowling on a second-day Adelaide Oval surface offering little opened up the tail, while R Ashwin snared three wickets in an unbroken 22-over spell before Bumrah dismissed Peter Handscomb. At stumps, Australia were seven down while trailing India by 59 runs.

An extended morning session went India s way, mostly, with Pujara and Ajinkya Rahane batting them to a lead of 275 by lunch. Nathan Lyon s removal of Pujara for a superb 71 and Rohit Sharma for 1 before lunch took some shine off the good work, but at 260/5 and with five sessions left in this Test, India had a platform from where they could push for quick runs before tea.

Spearheaded by a superlative bowling display from Bumrah, Kohli s team became the first from India to start a tour of Australia with victory in the first Test. His removal of the second-most-capped batsman in this Australian squad, Shaun Marsh, the skipper Paine and Pat Cummins in three separate spells proved massive, and without his strikes the result could have been different.

Half-centuries to the debutant opener Agarwal and Pujara and an unbeaten 47 from Kohli carried India to 215/2 on day one of the Boxing Day Test, on the friendliest batting surface of the series, to leave Australia facing a mountain to climb. Agarwal s agenda-setting 76 is the sixth score of 50 or more by an Indian Test debutant opener in their first innings, and the highest score by one making his debut in Australia. The 27-year-old allayed fears of another top-order wobble by leading an opening stand of 40 in 18.5 overs the longest any India opening pair has batted in South Africa, England, New Zealand and Australia since July 2011 with Hanuma Vihari, and then put on 83 in 36 overs with Pujara who ended the day on 68.

That India wanted to bat once was obvious. Their first innings spanned 169.3 overs and ended at 443/7, after a hundred to Pujara and fifties to Kohli and Rohit Sharma as Australia toiled on a wearing track. The hosts claimed their first wicket after two wicketless sessions and 68 overs, when a tired Kohli (82) uppercut Mitchell Starc to third man. Moments later, Pujara was bowled for 106, but Rohit (63*) marched on with Rahane (34) and Rishabh Pant (39) adding to a match-winning total.

India grabbed a whopping lead of 292 after Bumrah took 6/33 to bowl out Australia for 151 in 66.5 overs on day three at the MCG. Bumrah claimed Marcus Harris with a well-directed bouncer in the morning and then foxed Shaun Marsh and Travis Head with clever yorkers either side of lunch, before returning after tea to sniff out three wickets in 11 balls for the cost of one run.

Set a target of 399 after Kohli declared India s second innings at 106/8, Australia ended day four eight wickets down with Cummins fifty delaying the inevitable. India s push for a series-leading victory came from Bumrah and Jadeja who claimed three wickets each. Aaron Finch played a poor shot to Bumrah and was caught by Kohli for 3, and soon after Harris followed him back to the pavilion for 13 as Jadeja struck. When Shaun Marsh was also trapped lbw by Bumrah for a brisk 44 and his brother Mitchell fell for 10 to Jadeja, Australia s faint survival hopes were fading fast. Head put up some resistance with a battling 34 before his stumps were knocked over by Ishant Sharma and when Paine went for 26 to Jadeja the tail was exposed.

A day of to and fro at the SCG drew to a close with India claiming the honours thanks once again to Pujara, who succeeded where all but two of his colleagues failed. With 303/4 on the board, this represented India s most successful day of the tour in terms of runs scored. It helped that he had Agarwal (77) for company, who helped fashion India s biggest stand of the day (116) while weathering the storm of a short-pitched barrage in a morning session that yielded 69 runs.

Pujara fell seven runs short of a fourth Test double-century a surprise, given his record of converting scores of 160 into 200 and Pant secured his career-best to take India to a mammoth total. t was remorseless run-accumulation, with Jadeja s bullish 81 adding to Australia s toil across 167.2 overs from which India put up their highest total in a Test outside of Asia since the tour of England in 2007. An excellent 193 from 373 deliveries marked a personal best overseas for India s marathon man Pujara, who put on 89 for the sixth wicket with Pant, who made a landmark century the first by an Indian wicketkeeper on Australian soil during a record seventh-wicket partnership of 204 with Jadeja, who was last out to signal the declaration.

An abandoned evening session, coupled with the entire morning session washed out, meant that just 25.2 overs were bowled on day four. In that time, Australia were dismissed for 300, with Kuldeep Yadav claiming five wickets in his first match of the series, and forced to follow on for the first time in a home Test since 1988. At tea, they had reached six without loss during a truncated afternoon to trail India by 316 runs. 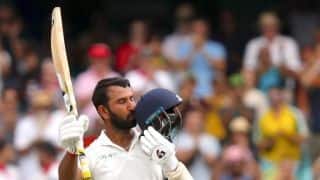 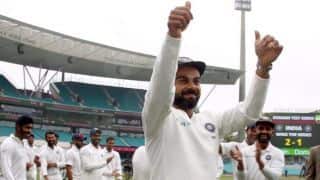