No follow-on? No surprise after Jasprit Bumrah's splendid MCG performance

No follow-on? No surprise after Jasprit Bumrah's splendid MCG performance

Australia s first innings lasted 66.5 overs, of which 60.5 were sent down on Friday

In a cricketing era long forgotten, the follow-on was a matter of course. If you enjoyed a lead of 200 or more, it was seldom that captains didn t seek to tighten the screws on the opposition by asking them to bat a second time, immediately.

The wily Ajit Wadekar used the follow-on, and his unquestioned knowledge of the rules, to rattle Sir Garfield Sobers on India s tour of the Caribbean in 1971. The first Test in Kingston was reduced to a four-day affair after the opening day was washed out with not even the toss taking place. The follow-on mark in a four-day game being 150, Wadekar asked West Indies to follow-on after India opened up a 170-run advantage. It took Sobers, not as clued in to the rules as his counterpart, a while to recover from the shock of being forced to follow-on for the first time by India. It s another matter that after losing the openers cheaply, the hosts easily batted through to a draw on the back of a brilliant unbeaten 158 from Rohan Kanhai and a measured 93 from the captain himself. (FULL SCORECARD: INDIA vs AUSTRALIA, MCG TEST)

The term follow-on, however, assumed an entirely different hue after the miracle at the Eden in 2001, when India overturned a 274-run deficit to inflict a crushing defeat on Steve Waugh s Australians. VVS Laxman s 281 and Rahul Dravid s 180 changed the outlook of teams towards asking the opposition to bat on immediately; where it once was a sure-shot option, the follow-on began to be viewed with skepticism and suspicion by skippers who chose to bat opponents out of the contest by opting to extend their lead, no matter how substantial already.

India found themselves in with a chance of asking Australia to bat a second time at the MCG on Friday, but it was no surprise that Virat Kohli chose not to embrace that approach. This, despite being 292 runs to the good on the back of a fabulous exhibition of exceptionally intelligent quick bowling from Jasprit Bumrah. The rationale behind the decision was obvious, though in the wake of their stunning second-innings collapse that has now left them gasping at 54/5, there will be several who will question its wisdom.

Contrary to doomsday predictions that the MCG surface would deaden up and reduce the third Test to a boring non-spectacle, there was enough juice for the bowlers to remain interested and for the batsmen to be apprehensive. Admittedly, not one of the Indian wickets in the second innings eventuated from the tricks that the third-day surface might have played, but there were a fair few deliveries that misbehaved, as they had done in the first two sessions when India s bowlers of all ilk decimated the fragile Australian batting line-up.

Australia s first innings lasted 66.5 overs, of which 60.5 were sent down on Friday. Expectedly, left-arm spinner Ravindra Jadeja shouldered the bulk of the workload with 25 overs. Bumrah s career-best 6/33 came from 15.5 intense overs of pace and skill, Ishant Sharma delivered 13 and Mohammed Shami 10. The workload looks un-intimidating, but a majority of the third day was extremely hot. Time wasn t a factor with Australia shot out shortly after tea, leaving seven nearly full sessions for India to eke out a result. (ALSO READ: Bumrah breaks 39-year-old record, becomes highest wicket-taker on debut)

Most crucial in the consideration to choosing to bat on, apart from allowing the bowlers enough time to put their feet up and recover from their physical and mental exertions, has to have been the wearing nature of the surface. As Bumrah pointed out, it has started to play more down than up, and while it is already a massive challenge for the batsmen, it will only get more and more difficult to hang on for survival on days four and five. The baking sun, and the natural wear and tear, should combine to break up the drop-in pitch even further; already dry as evidenced by the puffs of dust that dramatically appeared when Jadeja disturbed the surface, the track is expected to throw up more pronounced variations in bounce going.

India wanted to emphatically rule out the possibility of having to bat last, however remote that might appear. It can be argued that India could have done to Australia later in the day what they did to them earlier, or indeed what Pat Cummins did to them in the final session. That said, not enforcing the follow-on was anything but a conservative, defensive move.

The surface wasn t necessarily the reason for Bumrah s jaw-dropping exhibition of unerring accuracy and searing pace. If anything, much of the Gujarat paceman s success stemmed from his understanding of the game, and the psyche of the batsman. Still in just his first year in Test cricket, he showed that he was already a master at setting batsmen up, whether they nestle in the top-order or constitute the tail. He used the bouncer to push batsmen on to the back foot and then the full ball to breach defences, and made the most of the reverse-swing that India surprisingly extracted from the red Kookaburra, but it was his slower delivery that accounted for Shaun Marsh which was the clear highlight of the day.

With the 32-over ball having lost its hardness, Bumrah stepped up for the last over before lunch. After five fruitless deliveries, he was walking back to his mark when Rohit Sharma from mid-off asked him to try a slower one. The result was devastating. Marsh shaped for the yorker alright, but he totally misread the change of pace this one came at only 113 kmph and was hit flush on his pad, palpably in front, as the ball dipped wickedly on him at the last instant. You could have heard a pin drop in the Aussie changing-room.

His 6/33 meant Bumrah became the first Asian bowler to pick up a five-for in South Africa (Johannesburg), England (Nottingham) and Australia in the same calendar year. The two previous five-wicket hauls came in a winning cause. There is no reason to suspect he won t make it a unique hat-trick at some stage over the next two days. We lost a few more wickets that we wanted to: Jasprit Bumrah 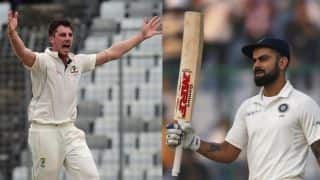