It s not often that one man produces his best bowling effort and brings up his highest Test score on the same day, and still finds himself in a team so far behind the eight-ball that their only hope for safety hinges entirely on the elements.

Pat Cummins had a wonderful Saturday at the MCG, following up his career-best 6/27 with a defiant, eye-catching unbeaten 61 which stretched the third Test against India to the final day. Sadly, he fought a lone battle all day long; as clinically professional as India were, Australia showcased none of the tenacity or the spirit that has been their calling card historically. (ALSO READ: Defiant Pat Cummins takes Boxing Day Test to the final day)

For the 19,855 faithfuls who turned up hoping for a dramatic reversal of fortunes and a return of the Aussie gumption and grit, there was little joy except from the injury-ravaged Cummins, who only returned to Test cricket in March 2017 in Ranchi, five and a half years after his sensational debut against South Africa in Johannesburg towards the end of 2011. Having announced his comeback with four for 106 from 39 enervating overs in the Jharkhand capital, Cummins has since been busy making up for lost time, happy to be in the shadow of Mitchell Starc and Josh Hazlewood but more than holding his own as the third prong in the pace attack.

His batting too has evolved to the extent that Nathan Lyon, his offspinning team-mate, calls him the best allrounder in Test cricket at the moment. On another day, that might have appeared a slightly rich call. When that pronouncement came minutes after Cummins and Lyon walked off the park at close on the penultimate day with victory still 141 runs away but the ignominy of a four-day rout averted, it carried a lot more punch, even if it still was one Aussie talking up another. (ALSO READ: Best and worst from Day 4 of Melbourne Test)

In Cummins extraordinary tale of courage and perseverance is a lesson Australia s top order would do well to emulate. Lyon spoke repeatedly of how the specialist batsmen “worked their backsides off at practice”, but when that doesn t translate into meaningful contributions where it matters, it counts for precious little.

Test cricket is not about the glamorous and the flamboyant. Invariably, it rewards the hard-working and the committed who put substance before style. The Cheteshwar Pujaras of the world might not attract the oohs and aahs that the more gifted stroke-makers elicit, but they are the bedrocks of the success of a team in the longer version, as this Boxing Day Test has once again amplified.

The uncharitable remarks on the back of Pujara s industrious century in the Indian first innings had a hollow ring to them even when India declared at 443/7 late on the second evening. Ricky Ponting announced that the No. 3 batsman s go-slow approach would cost his team dear as the match progressed, because it had taken too much time and robbed India of the same precious commodity. Others cheekily advised him to change his willow for a more dynamic one. There is a thin line between banter and disrespect. For a people who have always been convinced of their tendency to stay within the line while pushing it at every possible opportunity, it wasn t unusual, however, to be singing that tune.

Pujara s game revolves around patience and an understanding of his own limitations as much as strengths. He himself indicated on Thursday that the pitch had posed so many questions when it came to stroke-making that where he might have scored 130 or 140 for the time he spent in the middle in this knock, he only ended up with 106. But, in batting for nearly seven hours, he understood that it made no earthly sense to try and be bombastic for the sake of it. He grasped the significance of a huge first-innings total something Lyon touched upon on Saturday evening and the fact that his presence was crucial towards that end.

Where Cummins seemed to have watched, and listened to, him closely, the other Australians were obviously so caught up in their own world that they weren t paying attention. On a deteriorating if slow surface, once they were set a near-impossible target of 399, their best hope lay in playing the percentages and keeping themselves in touch for as long as they could. Instead, one batsman after another was dismissed playing glory strokes, some of them early in the piece, others after having done most of the hard yards. A combination of technical ineptitude and temperamental incompetence proved their undoing. Were Pujara that sort, he would have allowed himself a quiet chuckle or two. Thankfully, his idea of a good time is seldom at someone else s expense, unless that someone else is a bowler looking to get him out.

For all of Cummins heroics, Australia should go 1-2 down at some stage on Sunday morning. Stranger things have happened on a cricket field, but 141 with two wickets remaining, and the second new ball just five overs new, should preclude any nail-biting drama on day five. India s bowling group, mentally tired after a long day, will arrive also physically energised by the prospect of a first Test win at the MCG since February 1981. If all things remain equal, it will be a question of when rather than whether.

However, Virat Kohli has been around long enough not to take anything for granted. There will be no dimming of intensity, no loss of focus, no lapses in concentration of the sort Australia s profligate batsmen displayed. After all, Test cricket is unforgiving of sloppiness, and Australia s top-order have been reasonably so in this Test, and for a majority of this series. I was pretty intent on getting to 1,000 runs in a calendar year: Kusal Mendis 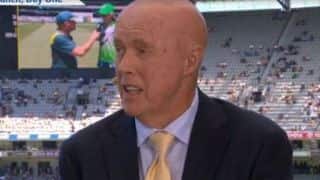 Kerry O'Keefe at it again: 'Why would you call your kid Cheteshwar Jadeja'