When Kohli reached his 25th Test hundred, he made it clear that he had opted to let his bat do the talking for him.

PERTH: Already this year, before coming to Australia, Virat Kohli had made Test hundreds in South Africa, England (two) and India. On Sunday, he completed a set of centuries in every country where he has batted in 2018, alternately gutsing and blazing his way to a memorable 123.

The Perth Stadium couldn t have asked for a better first three-figure compilation at Test cricket s newest venue, nor could it have hoped for a more appropriate protagonist than the Indian captain, clearly batting at a level far removed from anyone else in both camps. The quality of the innings was an added bonus, but then again, when Kohli makes runs, quality is always assured, isn t it?

ALSO READ: Was Kohli out? Outrage on Twitter after contentious dismissal

What made this particular milestone knock particularly enjoyable was the manner in which it was compiled. It was no free-flowing, supremely domineering essay of the kind that generally cascades off the broad Kohli willow. The nature of the surface, the state of the game and the quality of the Australian pace attack meant Kohli had to set aside his natural aggressive mindset and play the waiting game, a role he enacted to perfection on his way to his 25th Test century and his first against Australia in nearly four years.

The hard yards were put in on Saturday, the second day of the second Test, the sweet fruits picked off on Sunday. Unlike in the second innings in Adelaide where he was only watchful, Kohli began like a house on fire here, picking off four boundaries in his first 25 deliveries to race into the 20s. Standing well outside his crease despite the juice in the track, he moved beautifully into the straight-drive and the flick, picking off Josh Hazlewood with characteristic elan.

However, as Australia rejigged their lengths and probed away in the corridor outside off, Kohli showcased his versatility and adaptability. The great batsmen aren t those who bat in just one gear; if anything, their greatness stems from their understanding of when to attack and when to hold back, when to impose bossman status and when to sacrifice ego. Kohli managed to strike the perfect blend, riding blows to his elbow and forearm, happy to take one for the team, and never wavering from the steely determination that manifested itself right through his majestic presence.

There have been snide remarks about India s batting beginning at No. 3 and ending at No. 5. Disrespectful and insensitive as that might seem, there is a modicum of truth to that inference. Apart from a brief while in the second innings in Adelaide when they put on 63, Murali Vijay and KL Rahul have looked out of sorts, necessitating the captain to come in fairly early in the piece. The lower order inspires no confidence. Therefore, the onus on the captain to lead the way is even more pronounced than ever before.

Kohli didn t have a long stay in the first innings in the first Test, but knuckled down to grind out a crucial 34 in the second dig. Better off for time spent in the middle, he was as assured as can be expected on the trick-playing Perth Stadium deck, negotiating the pace threat of Mitchell Starc, Hazlewood and Pat Cummins, as well as the perennial danger posed by Nathan Lyon, with no little felicity.

When he was beaten outside off, as was inevitable on this deck, he quickly put it behind him. When he was pinged on elbow and forearm, he made not a fuss, summoning physio Patrick Farhart s magic spray and then carrying on like the tough guy he is. When the ball rushed in to him and necessitated careful watching, he offered a dead blade. And when the bowlers fed his strengths, he picked them off with practiced ease, the mind and feet and hands and bat in total synchronisation to direct the ball to different parts of the ground.

As he punched Starc through straight mid-off for his 11th four that took him to a sixth century in Australia, Kohli s celebrations were muted. There was no mouthing off of expletives, no leap in the air, no hands thrown up in acknowledgement of the cheers of nearly 20,000 spectators. Instead, he deliberately removed his helmet and carefully placed it on the ground, pointed to his bat and made the sign of talking with his right hand, making it clear that he had opted to let his bat do the talking for him.

Whether that was because he remembered Cummins prophecy that Australia wouldn t let him score a hundred, or Ricky Ponting s prediction that Usman Khawaja would score more runs than him this series, or anything else that he might have perceived as a slight, what triggered the reaction is yet to be ascertained. But whatever the reason, the novel celebration provided another insight into the Kohli mind. He might claim that he doesn t know the chatter in the outside world and therefore isn t affected by what is said of him, but clearly, that does rankle.

If being nettled results in such wonderful masterpieces, then maybe Kohli should take offence more often. But even otherwise, he is stacking up some astonishing numbers. He already has 1213 Test runs this calendar year at 60.63, with a maximum of three more innings remaining. Studding those runs are five centuries and four other fifties.

Kohli is coming off a particularly lean spell against Australia; before this 123, seven previous innings had yielded just 83 runs at home and away, with the Adelaide 34 as his highest. A Sachin Tendulkar-equalling sixth century against the Aussies has ended the drought. Having rediscovered his love for the Australian bowling, Kohli will be an even more intimidating force over the next fortnight. Who is to say that he is not desperate to make up for recent lost opportunities? 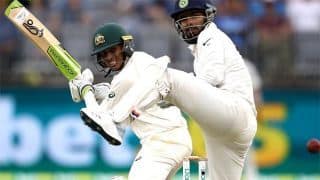 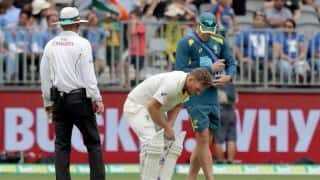