Australia were sick and tired of India s No. 3 and No. 4 on a searing day at the MCG.

When out in the middle, they make for a study in contrast. One is stately and upright, imperially majestic, positive intent oozing out of every pore, whether he is easing the ball towards the boundary or haring between the wickets as if driven by the wind. The other is a little less gainly, crooked knees preventing him from moving like a gazelle, his game revolving around steady accumulation rather than frenzied aggression.

Together, though, they work quite nicely for India, thank you. Virat Kohli, the dynamic influencer, and Cheteshwar Pujara, the unhurried aggregator, might make an odd couple, but they are a couple at peace with each other. As if driven by an imperceptible force that unites them in their common purpose of swelling the score board, they feed off each other s energy and experience. It is, therefore, hardly coincidental that as a partnership, they tally 2,708 runs in 56 Test innings, at a healthy average of 49.23 that is bolstered by seven century alliances and 12 other stands in excess of fifty. (ALSO READ: Australia end day two at 8/0 after India pile up 443/7)

With Pujara at No. 3 and Kohli a place below for most of the last five years since Sachin Tendulkar s retirement, it is inevitable that they will bat alongside each other more often than not. Pujara s strength lies in batting in his own zone, without being overtly influenced by Kohli s positivity. The skipper complements his experienced pro by not allowing his frustrations at not being able to convert one and a halves into twos to express themselves openly. Each man sticks to his own method; when those methods come together, like they did at the MCG on days one and two of the Boxing Day Test, they invariably mean a solid foundation and a big total that the bowlers can work with.

India s most productive batting innings of the calendar year overseas was a plodding, hard-working, industrious effort that forced even Kohli to keep his natural instincts in check. The two-paced 22-yard strip at the MCG wasn t the kind to encourage a full flow of the blade and the booming drives that are such a Kohli trademark. Watchfulness and circumspection had to be the watchwords because the ball misbehaved reasonably often on pitching. From the same length, it could either pop up and rap the knuckles, or scoot through and threaten ankles. To be able to put such distractions aside, ignore blows to body and finger, and piece together 170 painstaking runs in 409 deliveries in the third Test was a tribute to the versatility of Kohli and the bloody-mindedness of Pujara, the master at batting time and grinding out the opposition. (FULL SCORECARD: INDIA vs AUSTRALIA, MCG TEST)

All year long, India s batsmen have been under the pump – in South Africa, England and now Australia. The celebrated unit stood exposed as much by the quality of the opposition bowling as the conditions, and while on the face of it, it looked as if the MCG deck was batting-friendly, that was far from the case.

Patience had to be the underlying characteristic. That was fine with Pujara, of course. Kohli, who has been forced to work really hard for his runs this series, was equally adept at playing the waiting game after beginning with a flurry of on-drives that drove a record day one crowd to delirium and enraptured his partner, before reining himself in and playing according to the situation.

He is such a great timer of the ball, Pujara said of Kohli on Thursday while soaking in the adulation after his 17th Test century following up on his 123 in the first Test in Adelaide – made this his most successful overseas outing. His straight drive struck me the most, especially this innings. The way he was hitting the ball, when I was standing at the non-striker s end, I could see the full face of his bat. That is one shot I really enjoyed watching. Whenever we have a partnership, we try and share the information, whatever we can about the bowlers and the conditions.

Pujara had gone to bed on 69, Kohli on 47 when stumps were drawn on Wednesday. Both began the second morning positively against the hard new ball, but it wasn t long before Australia applied the brakes. The morning session produced just 62 in 28 overs, but India s joy stemmed from not losing a wicket. Pujara, astonishingly, outscored Kohli, adding 35 to his overnight tally and bringing up his second century of the series just before the interval; the skipper laboured for 75 deliveries in extending his score by 22, at least a dozen of them coming through edges that flew past the staggered slip cordon and down towards third-man.

Where Pujara must have marvelled at Kohli s ability to put the edges behind him and address the next ball with a clear mind, Kohli couldn t have helped but admire the manner in which Pujara s bat seemingly grew in width. There were deliveries that took off and pinged Pujara on his index finger; the magic spray and some taping later, he still pushed the left foot forward if the length so dictated, or brought his bat down in time without being hurried when it shot through from fuller lengths.

Australia were sick and tired of India s No. 3 and No. 4 on a searing day that attracted 36,524 fans, several of them vociferously backing the away side. There was more relief than delight when they finally broke through, and that only because Kohli ramped a short, wide ball from an embarrassed Mitchell Starc down third man s throat with a 26th Test ton beckoning temptingly. Even that relief dissipated when Pujara was bowled by a veritable shooter from the admirable Pat Cummins a few minutes later. As relatively easy as India s virtuosos had made batting look on the two-paced MCG surface, Australia knew that they had been schooled by two masters. And, they were left wondering if they had the personnel who possessed similar mental and technical strengths. 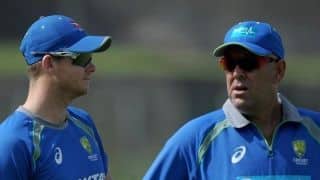