Kohli now has 40 ODI hundreds, and Sachin Tendulkar's record of 49 is in danger.

Spurred by a splendid hundred from Virat Kohli in the first half and some terrific death-overs bowling from Jasprit Bumrah and Vijay Shankar in the final passages of the second ODI, India edged Australia by eight runs in Nagpur on Tuesday. (READ: Virat Kohli, Jasprit Bumrah star as India beat Australia in thriller)

Kohli called on his reservoir of experience to craft a superb 116 off 120 that has taken him to within nine hundreds of matching Sachin Tendulkar s once-mythical record of 49. (READ: Kohli’s “chanceless” knock made the difference: Cummins)

On a turning surface on which India lost wickets in cluster, Kohli crafted a superb 116 off 120 balls while batting from the second over to the 48th while scoring nearly half of India s runs. His hundred was the difference in the end, helping India to 250 which proved to be just enough.

After that hundred, his 40th in ODIs, here’s a look at some staggering statistics of Kohli’s career.

59.73 – Kohli’s batting average after 216 ODI innings, the highest for any batsman in the game’s history with a minimum cut-off of 50 innings.

95.25 – His batting averages in successful ODI chases, which essentially means he scores nearly 100 in each match India when batting second. Of all players (minimum 50 innings), only MS Dhoni has a higher average of 105.25.

40 – Kohli’s hundred tally in ODIs. Sachin Tendulkar’s record of 49 is in danger.

24 – The number of times Kohli has scored hundreds in the second innings.

94.79 – His average as captain in ODI victories, a staggering number boosted by 15 hundreds and 11 fifties. 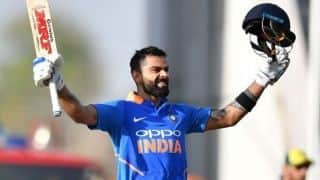 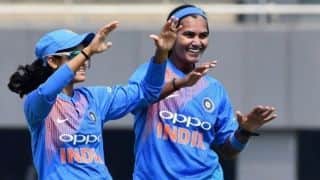