If India can get Rahul and Pant a couple of games against Australia, it will further add further shape.

There are a few slots to be filled in India s squad for the 2019 ICC Cricket World Cup and these four remaining ODIs versus Australia are crucial. We saw in the first game on Saturday that India went in with a very settled XI, with Virat Kohli returning to lead and bat at his customary No 3 spot and Jasprit Bumrah back in action for the first time since the end of the Test series in the first week of January.

With Bhuvneshwar Kumar rested for the first two ODIs, Bumrah was partnered with Mohammed Shami and the latter once again put in a very good show – both upfront and later in Australia s innings when he got two big wickets – to underline the emphatic value he s given India in ODIs this year. Shami is increasingly looking a certainty to take the new ball against South Africa on June 5 at The Oval as India s World Cup campaign gets underway, which is surely a good thing for India as they plan for the tournament. (READ: Finch’s forgettable 100th, Dhoni does it again, Jadhav seals No 6 spot)

I strongly believe that India’s fortunes in the World Cup will depend a lot on the playing XI picked for that game versus South Africa. It will be difficult to change the playing XI after just one game and the first three games in the World Cup are South Africa, Australia and New Zealand. It is imperative for the management to figure out the right combination and the team for the first game. From that perspective too, these remaining four ODIs are going to be extremely important.

Not very often does one find that winning a series is not a team s first priority, and this one against Australia could well be one such rare case.

Kedar Jadhav s match-winning 81 not out off 87 balls in Hyderabad, in tandem with MS Dhoni in a 141-run stand, has to my mind confirmed his spot at No 6 for the World Cup. Jadhav spoke after India s win of how Dhoni makes everyone feel good about themselves and how that in turn gives them confidence.

That, in a nutshell, is what Dhoni s value at this stage is to the Indian team. With a fourth successive ODI fifty against Australia this year, Dhoni has shown that there s still gas left in the tank. India s middle order is looking good, and if Ambati Rayudu can get some runs in the remaining four ODIs against Australia the team will look in prime shape as it signs off for the IPL.

But questions remain. Siddarth Kaul or Umesh Yadav? Rishabh Pant or Dinesh Karthik? Will Vijay Shankar be good enough if Hardik Pandya’s injury is more serious than we perceive it to be? These are some of the questions that will be answered in the course of time as we head into the World Cup. A few definitive answers might present themselves after this ODI series against Australia concludes.

With Kohli making it clear that the IPL won’t have any impact on India s World Cup selection, the current series has a lot of significance.

For me Shankar is not your fifth bowling option, but rather a sixth bowling option with a range of four to six overs on good days. We saw that in Hyderabad, where he bowled first change and conceded 22 runs in three overs. As well as he bowled in the recent T20I, he is not yet a ten-over bowler in ODIs.

Still, it was important to have a look at his capability before the World Cup in the limited time that India have. As Pandya is struggling with injuries over the past few months, it is imperative to figure out the other options. God forbid he doesn’t recover in time or the injury resurfaces during the IPL.

Kaul and Umesh are fighting for the fourth bowler’s slot now that Khaleel Ahmed looks out of reckoning. While Umesh got hit in the first game T20I, Kaul wasn’t much better in the second game. The IPL, according to Kohli, will not be an indicator – so then who will grab that extra seamer’s slot? With Pandya s injury, Kohli cannot afford to leave an extra seamer out of the World Cup squad in England.

Then there is the reserve wicketkeeper plus middle-order batsman slot, which to me is as a straightforward two-horse race between Pant and Karthik. Both squandered their chances in the Australia T20Is, but with Pant in the ODI squad he is likely to get at least a couple chances.

Of the various names chosen during the T20I series to stake a claim for World Cup selection, only KL Rahul grabbed the rope offered. In both games he looked fantastic and emphasised the difference between red and white-ball cricket. Rahul seems to be the management’s first choice option for the third opener position and his performance has done absolutely no harm to his chances. 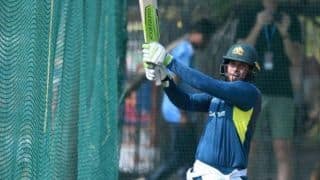