India's World Cup squad is likely to be the same as the one to face Australia, barring one change.

The BCCI selectors on Friday announced two different India ODI squads for the upcoming limited-overs series against Australia starting March 2 – one for the first two games and one for the next three.

These five ODIs are India’s last assignment before the 2019 ICC Cricket World Cup starts on May 30 – the deadline to name squads is April 23 – so by and large the players selected for the Australia series, with the exception of Siddarth Kaul who is in the squad for the first two ODIs with Bhuvneshwar Kumar rested, can be viewed as the 15 that will travel to England.

On that note, here are five takeaways from Friday’s squad announcement:

1. End of the road for Dinesh Karthik?

This series was ostensibly a shoot-out between Dinesh Karthik and Rishabh Pant for the reserve wicketkeeper’s role in England, but whoever was picked would also double up as a middle-order specialist batsman. Karthik, since being recalled to India s ODI squad for the tour of England last summer, has scored 242 runs from 10 innings at an average of 40.33 and a strike-rate of 79.96, with a best of 44. In these ten innings he has batted at third once, fourth four times, fifth thrice and twice at No 6.

Pant has played just three ODIs, all against West Indies in India last year, and has been in and out of India s T20I squad. He played all three T20Is in New Zealand this month, scoring 4, 40* and 28 as a specialist batsman.

The number of matches and stats favour Karthik, of course, and as an outfielder Karthik beats Pant too. Don’t look at his two dropped catches in a recent T20I. Where keeping wickets is concerned, MS Dhoni remains India’s top pick and Karthik and Pant only get the job when Dhoni is injured or rested.

So what could have tipped the skills in favour of Pant? That he is a left-hander? The promise of exuberance? Karthik denying a single in the deciding T20I in New Zealand, off the third ball of the final over? There has been no official reason given by the selectors, with chief selector MSK Prasad only saying that this isn’t the end of the road for Karthik. Here is a man who by his own admission had gained in confidence as a finisher, and now he’s out of the ODI squad. It must be a hard pill so swallow for the man who has been through the revolving doors of Indian selection more than anyone in the modern era.

Vijay Shankar appears to be the beneficiary of Hardik Pandya’s suspension in January for comments made on a talkshow, for being drafted into India’s ODI squad as the Baroda allrounder’s replacement has indeed turned his career around. Shankar, 28, made his ODI debut in Australia last month and batted just once, getting a chance at No 5 in an ODI in New Zealand from where he scored a good-looking 45 off 64 balls an innings which in his words changed his India career. Shankar, a seam-bowling allrounder, has bowled 16 overs in four ODIs without a wicket.

The selectors could view Shankar as a specialist batsman for the Australia series and the World Cup. He batted at No 3 twice and No 4 once in the T2oIs in New Zealand, scoring 84 runs at a strike-rate of 153.57. Also, given Kedar Jadhav’s fitness history, the management may also be looking at Shankar as someone to cover in the lower order as well as bowl a few overs.

Before Mohammed Shami emerged as a viable source of wickets up front and at the death in Australia and New Zealand this year, India used Bhuvneshwar and Jasprit Bumrah as the pace spearheads, with Umesh Yadav, Khaleel Ahmed, Kaul, Deepak Chahar, Umesh Yadav and Mohammed Siraj making fleeting appearances. With Bumrah rested for the Australia and New Zealand ODIs, Shami grabbed his chance with both hands and this year has 14 wickets from seven ODIs at an average of 20.64 and economy rate of 4.92

So not only has be proven mighty important for India in successive series wins, he has pitchforked himself into World Cup reckoning and pushed the left-armer Khaleel out of the ODI squad. Khaleel has been India s left-arm quick since the Asia Cup, taking 11 wickets in eight ODIs at 30.72 apiece while conceding runs at 5.36 an over, but now finds himself out of the World Cup race. Clearly, the selectors and management don’t think a left-arm option is that important.

4. KL Rahul gets a lifeline, but where does he fit in?

KL Rahul, after a terrible Test run, has shown a return to form with 89 and 81 in two four-day games for India A against England Lions as well as 42 in a one-day fixture. His last ODI came during the Asia Cup in September 2018, as opener, and made 60. If the BCCI is looking at him as third opener for the World Cup, then his chances of playing are dependent on one of Rohit Sharma and Shikhar Dhawan getting injured, or if Ambati Rayudu suddenly loses his form at No 4.

Not having a fixed spot in ODIs has added to his frustration, as he admitted during the Asia Cup. Rahul is back, but where he bats in India’s ODI team is not fixed.

5. No need for a third spinner in Ravindra Jadeja

Ravindra Jadeja made a successful return to India s ODI squad in last year s Asia Cup when Pandya injured himself, and in 11 games since September has claimed 16 wickets at 30.87 with an economy of 4.75. In those 11 ODIs since being recalled, Jadeja has batted five times with returns of 76 runs at a strike-rate of 77.55.

The selectors have chosen Shankar over Jadeja, ostensibly because of his the former’s batting prowess. India will take Yuzvendra Chahal and Kuldeep Yadav to the World Cup, which makes a third spinner unlikely given that Kedar Jadhav can bowl part-time offspin. India vs Australia, T20Is: Mayank Markande - All you need to know about India’s latest T20I pick 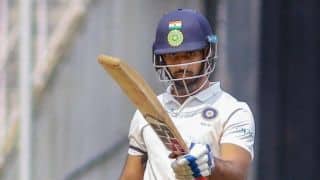