Jasprit Bumrah has become the second Indian bowler after R Ashwin to the milestone of 50 wickets in Twenty20 internationals.

Bumrah, in his 41st game, moved to 50 T20I wickets with the scalp of Peter Handscomb during the first match between India and Australia in Visakhapatnam on Sunday.

His 49th wicket was Australia captain Aaron Finch who was trapped lbw for a golden duck off the first ball of Bumrah’s second over.

Bumrah returned to bowl the 19th over of Australia’s chase, and with his penultimate delivery had Handscomb top-edge a pull that was taken by MS Dhoni, running towards short fine leg. (FULL SCORECARD: INDIA vs AUSTRALIA, 1st T20I)

Off the next ball, Bumrah underlined his status as arguably the best death-overs bowler in the international game with a pin-point yorker to bowl Nathan Coulter-Nile.

That gave him figures of 3/16 in four overs and took his career T20I tally to 51 wickets.

MOST T20I WICKETS FOR INDIA (minimum 30)

The next best after Bumrah is his current team-mate Yuzvendra Chahal with 46 wickets in 30 games.

Australia, chasing 127 to beat India, won off the last ball of the match when Pat Cummins punched two runs down the ground. Series against Australia will be good practice before the ICC World Cup 2019: Dilip Vengsarkar 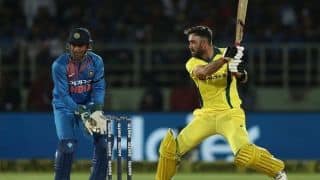