Will Shankar and Jadeja both get the nod? Who is India's third opener?

The five-match ODI series against Australia starting next month is the last opportunity for the BCCI selection panel to assess the players in the fray for the 2019 ICC Cricket World Cup.

The series which runs from March 2-13 is India‘s final international assignment before the IPL starts ten days later, after which Virat Kohli’s squad of 15 will fly to England for the World Cup starting May 30.

The BCCI selectors will meet today to pick the ODI squad to face Australia, with speculation that the likes of Jaydev Unadkat and KL Rahul could be recalled to the Indian team. (EXCLUSIVE: Playing the best cricket of my career now: Jaydev Unadkat)

Pandya and Rahul were sent home from Australia after being served a suspension by the BCCI for their controversial comments on a popular Indian TV talkshow, at which time Shankar and Gill were flown over as their replacements. Once the suspension was overturned, Pandya was flown to New Zealand and played the last two ODIs.

Kohli is slated to return to lead India for all five ODIs against Australia, while Rohit may be rested for the two T20Is that precede that contest.

The three main issues for the BCCI to consider are the reserve wicketkeeper behind Dhoni, the second allrounder after Pandya and whether a left-arm pacer is needed in India. (READ: Ashish Nehra’s five reasons for Rishabh Pant being in India’s World Cup squad)

Rishabh Pant and Dinesh Karthik are the contenders to be Dhoni’s understudy, with both capable of playing as specialist batsmen. Pant has played just three ODIs, all against West Indies in India last year, and has been in and out of India’s T20I squad. He played all three T20Is in New Zealand this month, scoring 4, 40* and 28 as a specialist batsman.

Karthik, since being recalled to India’s ODI squad for the tour of England last summer, has scored 242 runs from 10 innings at an average of 40.33 and a strike-rate of 79.96, with a best of 44. In these ten innings he has batted at third once, fourth four times, fifth thrice and twice at No 6.

The third opener’s role could go to Rahul, who after a terrible Test run has shown a return to form with 89 and 81 in two four-day games for India A against England Lions as well as 42 in a one-day fixture. An outside chance is Ajinkya Rahane, who has not played ODIs for a year.

Ravindra Jadeja made a successful return to India’s ODI squad in last year’s Asia Cup when Pandya injured himself, and in 11 games since September has claimed 16 wickets at 30.87 with an economy of 4.75. India will take Yuzvendra Chahal and Kuldeep Yadav to the World Cup, which makes a third spinner unlikely given that Kedar Jadhav can bowl part-time offspin. In those 11 ODIs since being recalled, Jadeja has batted five times with returns of 76 runs at a strike-rate of 77.55.

In ODIs in England, his bowling average is 27 and economy rate 5.13. Jadeja famously helped India win the 2013 ICC Champions Trophy in England, but when India went back in 2017 to defend their title he managed four wickets in five ODIs. As that tournament showed when England met eventual winners Pakistan in the semi-final at Cardiff, a dry and very Asian surface can prove detrimental for non-Asian sides, so at the back of their minds the BCCI selectors could see Jadeja as a handful as the World Cup drags on.

Vijay Shankar made his ODI debut in Australia last month and batted just once, getting a chance at No 5 in an ODI in New Zealand from where he scored a good-looking 45 off 64 balls – an innings which in his words changed his India career. Shankar, a seam-bowling allrounder, has bowled 16 overs in four ODIs without a wicket.

The selectors could view Shankar, 28, as a specialist batsman for the Australia series and the World Cup. He batted at No 3 twice and No 4 once in the T2oIs in New Zealand, scoring 84 runs at a strike-rate of 153.57.

Khaleel Ahmed has been India’s left-arm quick since the Asia Cup, taking 11 wickets in eight ODIs at 30.72 apiece while conceding runs at 5.36 an over, but suddenly Unadkat’s name has entered the mix. Unadkat played the last of his seven ODIs in 2013 and featured in T20Is for India as recently as March 2018. Speaking to CricketCountry on Thursday, Unadkat said he was in the bowling form of his life after taking 39 wickets in Saurashtra’s run to the 2018-19 Ranji Trophy final.

However, the fact that he doesn’t have special numbers to show for in limited-overs cricket in recent times hints at Unadkat being an unlikely left-field pick. Khaleel has looked good in his ODI and T20I appearances and has won praise from Rohit and Kohli. 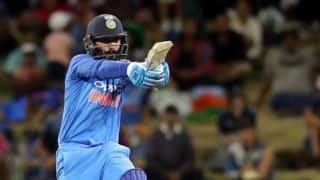