The third Test between India and Australia will be a historic one for both sides.

The third Test between India and Australia will be a historic one for both sides. India will have Ranchi as their 26th venue and Australia will play their 800th Test. Incidentally, Australia played their first ever Test on March 15, back in 1877, which was also the first ever official Test. It took them 140 years and 1 day to reach the 800-mark. As for the series, India bounced back extremely well in Bengaluru, winning by 75 runs after losing the first game at Pune by 333 runs. While Australia need just a win to ensure that they retain the Border-Gavaskar Trophy, India need to ensure that they at least chalk out a draw to ensure that they have a chance of winning the trophy back in the final Test at Dharamsala. There will surely be some keenly contested contests in the game. Let us take a look at few of them:

Battle amongst spinners: This has been a series, which has been dominated by the spinners. As many as 62 wickets have been picked up by spinners so far and we will surely witness some more at Ranchi. It may eventually boil down to which side s spinners pick up more wickets. That has certainly been the tone of the series. The fast bowlers have done their bit as well, but the spinners have taken centrestage. The likes of Ravichandran Ashwin, Ravindra Jadeja, Nathan Lyon and Steve O Keefe will once again play a major part in determining the outcome of this match, which could have larger ramifications on the series as a whole. Full Cricket Scorecard: India vs Australia, 3rd Test at Ranchi

Virat Kohli vs Steven Smith: In the on-field battle between the captains, Smith certainly has the upper hand. In his 4 innings Smith has scored 172 runs at 43, while Kohli has just scored 40. Kohli will certainly want to be among the runs in this match. When he scores big, India more often than not put up a big score on the board. Smith, on the other hand, will want to repeat the heroics of Pune in this match, help Australia win the match and also retain the trophy.

Murali Vijay vs Josh Hazlewood: Vijay will be playing his 50th Test at Ranchi and is known to be susceptible against the short deliveries. In the absence of Mitchell Starc, Hazlewood will lead the bowling attack in this match and will look to get the big scalp of Vijay. Hazlewood will be raring to go especially after picking up 6 wickets at Bengaluru. A wicket in his first spell will be an ideal start for him and Australia. Kohli, Smith and DRS controversy in IND vs AUS, 2nd Test: As it happened

David Warner vs Ravichandran Ashwin: Warner has been dismissed thrice in four innings by Ashwin. Warner likes to attack right from the outset regardless of the bowler. However, he has scored just 37 runs against Ashwin, who will almost certainly be perhaps introduced early into the attack to put Warner off his game. India will bank on Warner to attack Ashwin and once again fall prey to him.

Shaun Marsh vs Umesh Yadav: Marsh is an excellent player of spin. For a player who has played most of his cricket on the fastest track in the world, his mastery of spin is nothing less than astonishing. In fact, he averages more against spinners than the fast bowlers, which is why Umesh will be a handy option against him. Between him and Ishant, Umesh has certainly been the more consistent one and will look to get the priced scalp of Marsh in the Ranchi Test. 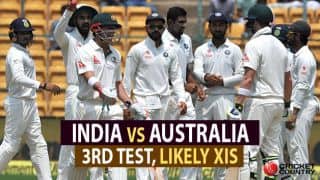 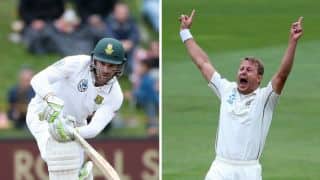